Moren pens what Publishers Weekly calls “a frenzied story full of bold spycraft and exciting ground and air chases” in this mash-up of espionage and science fiction, the first entry in a planned series about a galactic cold war between a commonwealth of planets and an aggressive empire. His hero is a veteran intelligence operative for the commonwealth who’s sidelined after being wounded on a mission, but has to jump back into action to save his undercover team—now led by his ex-wife and including a recruit who defected from the enemy empire—from being captured and executed. The novel features characters and settings from Moren’s previous book, The Caledonian Gambit.

In a reimagining of a classic character in the tradition of Wicked (which offered a sympathetic take on Oz’s Witch of the West), Sullivan creates an origin story for Milady de Winter, the seductive villainess of Alexandre Dumas’s The Three Musketeers. Growing up in sixteenth-century France, the future Milady is schooled by her mother to use her feminine wiles to her advantage in a male-dominated world. “I might say that my opinion of men is low,” Sullivan writes in her protagonist’s voice. “But then, my opinion of mankind is fairly poor to begin with. It is only that men generally have more scope for mischief and malice.” Milady is the adult debut for Sullivan, the author of five books for middle-grade and young adult readers. 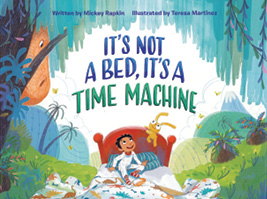 In his first children’s book, geared toward kids aged three to seven, Rapkin follows a boy whose imagination takes him on a nighttime journey to the era when dinosaurs roamed the Earth; while our hero is scared at first, he and his stuffed rabbit ultimately make friends with a playful T-Rex. “The simple story and colorful illustrations [by artist Teresa Martinez] successfully combine to spark readers’ imaginations,” says School Library Journal, “and serve to make bedtime feel more like an adventure than an interruption of fun.” Rapkin is best known for his nonfiction book Pitch Perfect: The Quest for Collegiate A Cappella Glory, which inspired the hit film series.

A prominent entertainment lawyer who co-produced the Broadway blockbuster The Book of Mormon, Morris has published two previous works of fiction—the short story collection White Man’s Problems and the novel All Joe Night. Here, in what Kirkus describes as “a wry take on the male midlife crisis,” Morris crafts the tale of one John Reynolds Stanhope, a Hollywood power broker in his late forties who’s struggling with his weight, chronic insomnia, and a career slowdown. Over the course of a weekend during which he secretly plans to participate in a Gettysburg battle re-enactment—accompanied by a Playboy Playmate—he contends with a series of personal and professional misadventures.

THE ICE AT THE END OF THE WORLD
Jon Gertner ’88

Gertner, a feature writer for the New York Times Magazine, takes readers on (as the subtitle puts it) “an epic journey into Greenland’s buried past and our perilous future.” In the first half, he describes the island’s exploration; as Booklist says in a starred review, “Gertner entrances with tales of dogsleds, cold, hunger, isolation, disasters, death, and the against-all-odds collection of invaluable scientific data.” In the second half, he describes the potentially catastrophic effects of climate change on Greenland’s ice sheet, which weighs nearly three quadrillion tons—and, if melted, would raise worldwide sea levels by an astounding twenty-five feet. “Gertner observes that it will take a ‘moral awakening’ to spur us to confront this looming threat,” says Booklist. “Hopefully, his deeply engrossing and enlightening ice epic will instigate action.”

Morrison, who earned her doctorate in art history on the Hill, is senior curator of manuscripts at L.A.’s Getty Museum. She serves as editor of this handsomely produced art book describing a popular type of illuminated volume from the Middle Ages, also the subject of a recent exhibit she curated. Known as the bestiary, the genre features images of fantastical creatures (unicorns, griffins), as well as the exotic (tigers, apes) and the familiar (dogs, horses). “Originally designed as a devotional or teaching work, to be used within monasteries as well as in sermons for the public, the bestiary had properties that enabled it to fulfill a number of functions at once,” Morrison writes in the introduction. “Its stories were meant to impart knowledge, inspire awe, and even elicit humor.”