For Human Ecology student Jordana Gilman ‘ 14, the epiphany came last fall, while doing nutrition homework in Savage Hall. “I looked up,” Gilman recalls, “and saw three white male portraits staring down at me.” Where, Gilman wondered, were the images of Cornell’s great women?

Most people—especially busy undergrads—would have left it at that. Gilman is not one of them.

She’s a campus leader—among other things, president of Hillel and a Meinig Family Cornell National Scholar. She completed her undergrad work a semester early, with an academic record that won her admission to med school at SUNY Upstate. For her birthday, she asked friends to paper her Facebook wall with articles on gender equality. Says Gilman’s Meinig mentor, vice president for student and academic services Susan Murphy ’73, PhD ’94: “Jordana is one of those students who reminds me why I do what I do.” 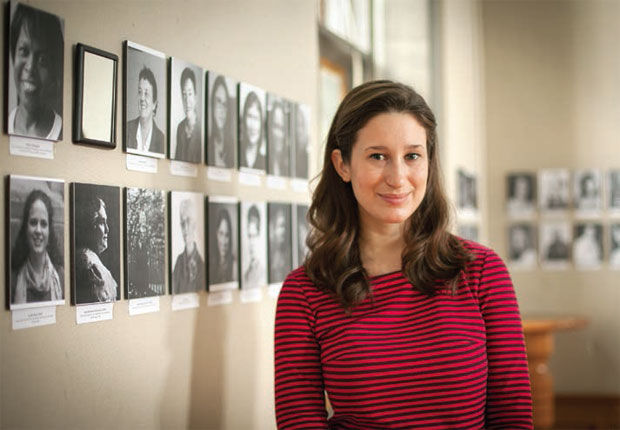 Upon reflection: In the exhibit curated by Jordana Gilman ’14, each wall had a mirror so viewers could picture themselves among the subjects. Photo: Jason Koski/UP

During the month of March, proof of Gilman’s tenacity was on display in the Willard Straight art gallery: an exhibit honoring 250 Cornellconnected women from the nineteenth century to the present. Gilman chose half the subjects, drawn from University histories and other sources; the rest are current faculty, staff, and administrators (Murphy among them), picked via student nominations. “I’d been thinking that the message we were receiving was that men are the presidents, the CEOs, the leaders in STEM fields,” says Gilman, a human biology and society major, “and that I could do something to change a little bit of that.”

The small black-and-white portraits, which Gilman gleaned from the Internet, include some famous names: Supreme Court Justice Ruth Bader Ginsburg ’54; former Attorney General Janet Reno ’60; novelist and Nobel laureate Pearl Buck, MA ’25; former U.S. Rep. Gabrielle Giffords, MRP ’97; actress Jane Lynch, MFA ’84. Others are less widely known, but heroines in their respec tive fields: Oscar-winning film editor Thelma Schoonmaker ’61; astronaut Mae Jemison, MD ’81, the first African American woman in space; geneticist Barbara McClintock ’23, PhD ’27, the only woman to win an unshared Nobel Prize in medicine. Among Gilman’s favorites is Margaret Morgan Lawrence ’36, who broke barriers in child psychiatry. “When she was here she was the only African American on campus,” Gilman says. “She boarded with a white family, doing their cooking and cleaning, living in an unheated attic. She was finally admitted to Columbia medical school when she assured them that she wouldn’t make a fuss if a white patient refused to see her.”

While “Women in the Big Picture” was only on display for a month, Gilman hopes the project will continue. An expanded online version is in the works, and selected portraits may travel around campus and elsewhere. The idea has already gone beyond Cornell via Gilman’s social media campaign, hashtagged “showmethewomen.” “The portrait issue is a small one within the wider gender equality issue, but people are noticing it,” she says. “It’s concrete. And it’s not particularly threatening to men, so they’re getting involved.”

But Gilman notes that in mounting the show, she was reminded how entrenched sexism can be—even among the three males who helped her hang the photos. “Every time they pulled a portrait out of the box, they commented on the woman’s attractiveness,” she recalls. “These are the best boys, who were devoting their days to this, and they still couldn’t help themselves. I can’t help but think that if this were an exhibit of 250 men, it wouldn’t even come up.”