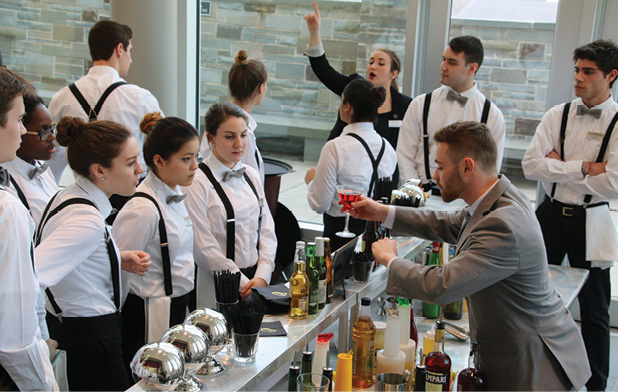 Scheduling speakers from around the country. Planning a program of events down to the minute. Designing menus of food and cocktails to please hundreds of paying guests. Managing a $120,000 budget. Recruiting legions of volunteers.

There are easier ways to earn six academic credits.

“In August, we hit the ground running,” says Taylor Meadows ’16, managing director of this year’s Hotel Ezra Cornell (HEC). For ninety-one years, the Hotel school’s student-run hospitality conference has drawn alumni and industry leaders to campus for a whirlwind weekend in March, when as many as 600 people flock to the Statler for networking, receptions, gala dinners, lectures, and more.

In the year leading up to each HEC, its board of directors–chosen by a student-faculty panel just weeks after the previous one ends–put in countless hours of preparation. They seek wisdom from past board members; attend other conferences for inspiration; and put on practice events–such as a “mocktail” reception–to get used to the Statler’s event spaces. On the weekend itself, every task–from check-in to turndown service, meal prep to dishwashing–is performed by student volunteers. “This is such an amazing, hands-on management and leadership opportunity,” says Reneta McCarthy ’84, MPS ’01, a senior lecturer at the Hotel school and faculty adviser to the past twelve HECs.

Statler passed away shortly thereafter–and his foundation became one of the Hotel school’s major benefactors.

In 2016, as in most years, there were some minor snafus–late deliveries; a missing case of coffee cups–that went unnoticed by guests. But every now and then something larger goes awry–as at the now-legendary HEC when Lobster Newberg was served over vanilla ice cream instead of chestnut puree. (The unconventional dish was actually something of a hit.) “Our guests don’t want a perfect weekend,” Meadows observes. “If they wanted a perfect conference, they’d go somewhere else.”

The past few decades have seen a shift in focus. Once a predominately social weekend, HEC now emphasizes education: 2016 featured more than twenty speakers, including current and former executives from Ritz-Carlton, Hyatt, Airbnb, and Orbitz. “When I was in school, it was probably 90 percent social and 10 percent educational; that has totally reversed,” says Robert Mandelbaum ’81, president of the Cornell Hotel Society. “It used to be focused on networking and socializing among alumni; there were even skits and plays. Now it’s very much an educational industry conference with amazing student-generated food and beverage events woven in.”

This year, Meadows and her fellow board members made a concerted effort to draw in Hotelies with a broad range of interests, like those concentrating in finance or design. They also partnered with a class in which students design a restaurant concept; its professor chose a winning project–a pan-Latin eatery called Tia Mia–whose creators put on a tapas lunch. “From year to year, students want to make it better than the previous one,” says Meadows. “But it’s about more than that; it’s about trying new things.”

Though many may assume that HEC sprang from the Hotel school, it’s actually the other way around. A century ago, the University offered only a small hospitality program, based in the College of Home Economics and founded by Professor Howard Meek. Hotel industry giant E. M. Statler–a renowned skeptic of a formal hospitality education–was invited to attend the second-ever HEC in 1927. Says McCarthy: “He was so impressed with what he saw that at the gala banquet he stood up and said, I’m converted–Meek can have any damn thing he wants.’ “