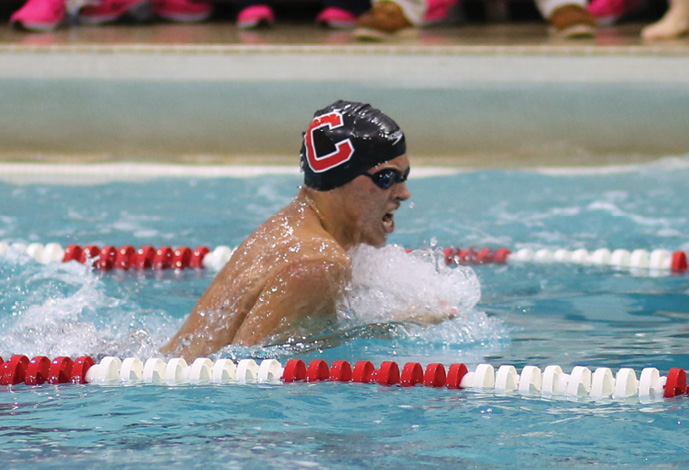 MEN’S SWIMMING Alex Evdokimov ’18 (above) became the first swimmer in 13 years to win both breaststroke events at the Ivy Championships in back-to-back seasons, helping the Big Red to its best league meet finish since 2009. Evdokimov set school, league, and Brown pool records in the 200 breaststroke with a time of 1:53.56, nearly 3.5 seconds faster than anyone in University history. He also set a school record in the 100 breaststroke with his winning time of 52.46. As a team, Cornell finished fifth, capping a season that also saw it extend its non-conference dual meet winning streak to 13 with victories over Binghamton and Colgate. 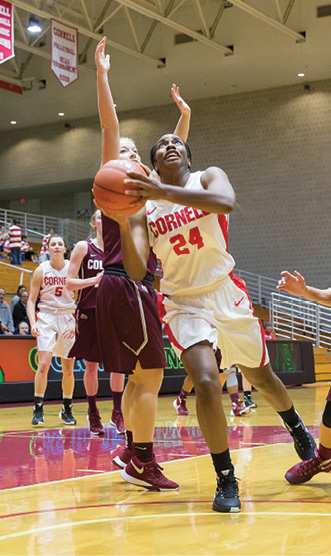 BASKETBALL Matt Morgan ’19 set an Ivy freshman scoring record with 510 points in 27 games while earning second-team All-Ivy honors. His average of 18.9 points per game led both the team and the league, and was in the top eight among freshmen nationally. On the women’s side, Nia Marshall ’17 (right) was a second-team all-league pick after becoming only the second Big Red player to surpass 1,200 points, 500 rebounds, 100 assists, 100 steals, and 50 blocked shots in a career.

WOMEN’S GYMNASTICS Buoyed by a home crowd at Newman Arena, the Cornell squad earned its first Ivy Classic win since 2010, sharing the crown with Brown. The teams finished with identical scores of 193.325, the first time the title has been shared since the first Ivy Championship in 1977. Cornell won three of the four individual events with Kaitlin Green ’19 taking the bars with a score of 9.850 and the beam with a 9.875. Malia Mackey ’19 won the vault with a 9.775.

MEN’S LACROSSE The Canadian Lacrosse Association team in the upcoming U19 World Championship will include three players with Big Red connections. Clarke Petterson ’19 is currently a short stick defensive middie for the Big Red while attackman Jeff Teat and goaltender Caelahn Bullen, who will enter the Class of ’20 this fall, have committed to join the Cornell squad next season. The championships will be held in July.

MEN’S SQUASH Cornell was the Hoehn Cup runner-up, its best finish in the College Squash Association’s B-Division Championship since winning the event in 2007. The Big Red reached the final with wins over Middlebury and George Washington before falling to Drexel 5-4. 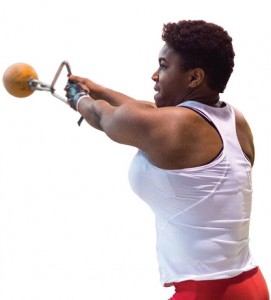 TRACK AND FIELD After helping Cornell finish second at the Indoor Heptagonal Championships, Rudy Winkler ’17 was named the Northeast Region’s Field Athlete of the Year by the U.S. Track & Field and Cross Country Coaches’ Association. In addition to winning the Indoor Heps title in the weight throw for the second consecutive year, Winkler had a toss earlier in the season of 74 feet, 10-1/2 inches, the second best in Ivy history. The women’s team also finished second at the Indoor Heps, led by a 1-2 sweep in the weight throw by Leena Morris ’19 (right: school record 63 feet, 10-3/4 inches) and Autumn Covington ’19 as well as seven other second-place finishes.

WOMEN’S TRACK Former Cornell track star Jamie Greubel Poser ’06 has been nominated for the Amateur Athletic Union’s Sullivan Award based on her 2015 performance in bobsled. The award honors the nation’s top amateur athlete; Poser was ranked second in the world after a 2015 season that saw her win six medals, including two golds, on the World Cup circuit and earn a fifth-place finish at the World Championships.

ROWING Olympic medalist Michael Staines ’71 has been named to the National Rowing Hall of Fame. Staines, a 2010 inductee into the Cornell Hall of Fame, took silver in the men’s pair during the 1976 Games in Montreal. He also participated in the 1972 Olympics in Munich, as part of a coxed pairs boat that was eliminated in the semifinals. He was a three-year letterman on the Hill and rowed in the number-three seat for the varsity eight crew that won the 1971 Intercollegiate Rowing Association championship.

MEN’S SOCCER Fresh off helping Stanford win the 2015 NCAA Division I title, John Smith has been named head coach of the Cornell men’s soccer team. A former all-American at Rollins College, Smith spent four years at Stanford. Previously, he was head coach at the University of the Incarnate Word, where he won three conference titles and went 62-26-10 in six seasons.