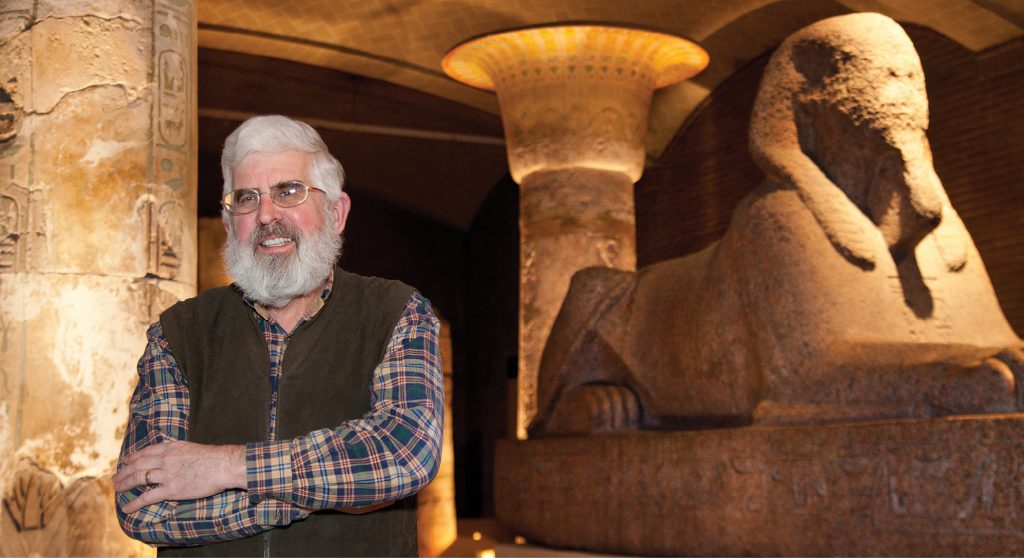 LIBATION MAVEN: Patrick McGovern ’66 at the Penn museum, home to his office and lab.

Back in 1957, when archaeologists from the University of Pennsylvania Museum unearthed a royal tomb in Turkey, they found more than the remains of a Phrygian king. They also discovered, among other treasures, the largest set of Iron Age drinking vessels ever found—some 160 bronze containers used in the funerary feast and sealed up with the departed. Dating from the eighth century BC, those vessels contained the granular remains of a celebratory beverage—pounds of the stuff, which were transferred to paper bags and put into storage at Penn’s museum in Philadelphia.

Four decades later, researcher Patrick McGovern ’66 retrieved those bags, housed just two flights of stairs up from his lab in the museum, and analyzed the contents. His finding: that the departed king—believed to be either the fabled Midas or (more likely) his father, Gordius—was sent to his eternal rest amid toasts of what McGovern termed an “extreme fermented beverage” comprising wine, beer, and mead.

Blasts from the Past

A guide to imbibing in retro style

While McGovern studies the evidence of long-gone libations, he’s also a fan of modern beverages that can offer a sense of how those ancient drinks tasted.

Retsina: McGovern’s chemical analyses suggest that resinated wine (which contains pine resin, originally used as an antioxidant to prevent wine from turning to vinegar) was popular for thousands of years in the Middle East and Mediterranean. Greece is the only place that continues the tradition; he recommends a finer retsina, such as Boutari.

Ancient grape varietals: Grapes that have a long history, according to the DNA evidence, include Öküzgözü (“eye of the ox”) and Bogazkere, both from Turkey. McGovern recommends Kavaklidere’s Yakut, a red that blends the two.

Amphora method: Wine is fermented and aged on its lees (residual yeast) and skins in pottery jars stored underground, creating strong tannins and intense aromas due to chemical reactions with the clay. One that McGovern recommends is Pheasant’s Tears’ Saperavi, from Georgia in Transcaucasia.

Wild fermentation: McGovern is fond of the Gueuze and Grand Cru Bruocsella lambic at Belgium’s Cantillon Brewery, which exposes its libations to more than 2,000 strains of yeast and microorganisms; after boiling, the beer is cooled under open windows.

Mead: Honey contains its own yeasts, making it “a prime target of our ancestors’ thirst for fermented beverages.” McGovern recommends Heart of Darkness, a raspberry/blackcurrant variety from Schramm’s Mead in Michigan.

The work helped launch McGovern into a new métier: he became the Indiana Jones of ancient libations, pioneering the field of biomolecular archaeology. “Dr. Pat,” as he’s known, employs analytical chemistry techniques such as mass spectrometry and gas chromatography to study the remnants of alcoholic beverages from around the globe, sometimes using samples as tiny as a quarter of a gram. He has garnered national press coverage for such work as analyzing residue of the oldest fermented drink yet found: a beverage made of fruit, rice, and honey discovered in 9,000-year-old jars in China’s Henan province. “Alcohol is so pivotal to human development—religions, social relations, medicine,” says McGovern, whose official title is scientific director of the museum’s Biomolecular Archaeology Project for Cuisine, Fermented Beverages, and Health. “It’s a nexus of all sorts of things, both biological and cultural, that humans have been involved with, all over the world.”

McGovern is chatting with CAM in his Penn Museum office, where the bookshelves sport such titles as Make Mead Like a Viking and The Comic Book Story of Beer. On one wall—hanging above a vintage hi-fi stacked atop a dial-controlled microwave, ancient artifacts in their own right—is a framed caricature of McGovern and a companion cruising in the time-traveling DeLorean from Back to the Future. That cartoon evokes a key element of McGovern’s work: he doesn’t just explore ancient libations as bygone artifacts, but aims to bring them back to life through an ongoing partnership with the founder of Dogfish Head Brewery—craft beer legend Sam Calagione, the other fellow drawn in the DeLorean.

Since 1999, Dogfish Head has sold Midas Touch, which the company describes as a “sweet yet dry” brew based on the Phrygian find. Other collaborations have included the award-winning Chateau Jiahu, developed from the ancient Henan drink. (“It’s got a nice sweet and sour profile,” McGovern says. “It really goes well with Chinese food.”) Dogfish’s Ta Henket—the name means “bread-beer” in ancient Egyptian—was McGovern’s more freewheeling take on what may have been drunk during the time of the pharaohs; sporting hieroglyphics on the label, it contains such unconventional ingredients as doum palm fruit and za’atar, an herb blend ubiquitous in northern Africa and the Middle East. (Neither proved widely appealing to American palates, and they aren’t currently in production.) “It’s like you’re drinking a liquid time capsule,” he says of quaffing a remastered libation, going on to note that “the processes of beermaking and winemaking haven’t really changed that much. There are only so many ways that you can take, say, a cereal and change it into sugar and then introduce microorganisms to start fermentation.”

McGovern has published several books on his adventures in alcohol archaeology, and in June, W.W. Norton & Company released his latest: Ancient Brews Rediscovered & Re-created. It chronicles his analysis of libations around the globe, from a Nordic grog (whose ingredients include birch bark and lingonberries) to a Central American corn beer flavored with cocoa. For each beverage, McGovern offers the recipe for a home-brewed version, as well as a food pairing. Such work, he writes in the preface, “proceeds on the assumption that humans worldwide, probably going back millions of years to Paleolithic times, had a genetic, physiological, and psychological makeup similar to ours. In short, like us, our ancestors knew what smelled and tasted good and what gave them a buzz, cultural preferences aside.”

McGovern’s formative years proved to be ideal training for his current career as the book-writing Indy of alcohol. After majoring in chemistry and minoring in English on the Hill, he earned a PhD in Near Eastern archaeology and literature from Penn; his fieldwork has included directing the decades-long excavation of a site in Jordan and assisting on digs in Egypt, Turkey, and Jerusalem. In 1971, as a grad student, he spent a season picking wine grapes in the German Rhineland—contributing, in a small way, to what would be known as one of the region’s finest twentieth century vintages. But McGovern traces his love of libations back farther, to a summer in Germany as a sixteen-year-old high schooler. In addition to biking through the Alps and working on a farm scything wheat by hand, he discovered a vital economic fact: at that time and place, beer was cheaper than Coke.

So, having picked up a taste for the brew, what did he do when he returned to the U.S., where the drinking age was then eighteen? At least once, he admits with a laugh, he dressed up in lederhosen and a feathered hat, marched into an Upstate bar, and demanded—in perfect German—to be served.