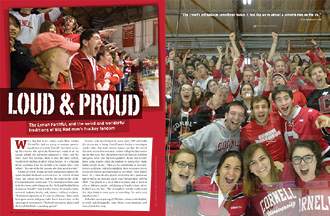 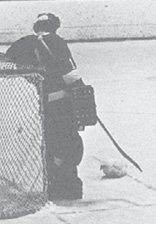 As a former player, CAM’s tribute to the Lynah Faithful (“Loud & Proud,” November/December 2016) brought back many wonderful memories. However, I must clear up one misconception echoed by John Hayes ’98, MS ’00, of eLynah.com in answer to “Why do we throw fish at Harvard?” John repeated the oft-told tale that it started in 1973 in retaliation after a Crimson fan threw a dead chicken over the glass in Cambridge at Cornell’s poor net minder, Dave Elenbaas ’73.

As the “victim” of that fowl deed, I can attest that the clucker was in fact as alive as a rooster crowing at sunrise, as the photo (above right) evidences.

Thank you for the article on the Lynah Faithful, which briefly mentions the tradition of putting a live chicken in Harvard’s goal crease between the second and third periods of the Harvard game. I’m familiar with the tradition because I was the “Chicken Man” from 1979 to 1981. My brother Bill ’78 had the honor for three years before me.

A local poultry farmer in Trumansburg happily supplied the bird on the day of the game. Sneaking a live chicken into Lynah wasn’t hard. I had a homemade black cloth bag that I wore with the strap on one shoulder and the chicken positioned on my back. I put a Cornell sweatshirt over it to conceal the strap and wore a parka to the game. The security guards always asked everyone to open their coats, which I did, but they never looked back to see if anyone had a large bulge in back. The chicken would go to sleep once she was inside the bag. Once the Zamboni finished resurfacing the ice, I scaled the glass after the second period, and put the chicken in the goal. I never tied her there. I just sat her in the crease on the goal line and she stayed put until rink personnel picked her up.

The last year that I was the Chicken Man, Cornell public safety arrested me on the ice after I put the bird in the crease. The Cornell Daily Sun published an editorial asking the university to free the Chicken Man and the university dropped all charges at an informal private hearing a month later.

Lynah fans of many generations know a place is special when week after week, they leave games with no voice left, capture fond memories with lifetime friends, and develop an odd appreciation for both cowbell rhythm and the Canadian
national anthem.

Just got back this weekend from seeing the Big Red defeat UNH at MSG, and came home to find your great article on the Lynah Faithful. It brought back so many memories. Here’s one of mine:

It had to be during the ’83-84 season. I attended every home game for four years, and I was with my very good friend Joon Kim ’84. We were sitting about ten rows up over one of the blue lines. Suddenly, a puck was airborne and heading toward us. Similar to a foul ball at a baseball game, the whole section stood up and tried to grab the puck. It landed near our feet and I immediately covered it up, like the great Darren Eliot ’83 in the day. Joon also was partly covering it up, assisting like the great defenseman Mike Schafer ’86. We briefly argued over whose puck it was, and decided it was both of ours. I now live in New York and Joon is in California. We still have that puck 32 years later, and whenever we visit, at most once a year, we exchange “the Puck.”

Great piece! However, there are three important traditions that weren’t mentioned:

1. The Pep Band plays “Three Blind Mice” when the referees skate out at the beginning of a period.
2. When a penalty is called on the visiting team, the band plays the theme from “Dragnet.”
3. The timekeeper always announces at the appropriate moment that one minute remains in the period. A few seconds before this, the crowd yells, “Hey, Mr. Timekeeper, how much time is left?” He then announces, “One minute remaining in the period,” and the crowd yells, “Thank you!”

Reading this article got my heart beating fast remembering those wonderful times at Lynah Rink! I had a cooking class at the Hotel school on Tuesday nights, so it was a given that all of us Faithful in the class would miss at least the first period of the game. We would run from class to the rink the minute the last dish was washed. We usually could get in for free at that point. Oh, what fun it was to chant and cheer Big Red to victory. So glad to hear that the tradition continues today! 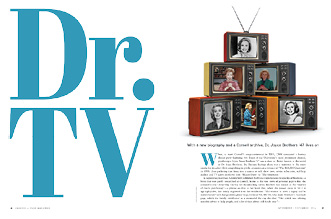 Thank you for this beautiful piece on my mother (“Dr. TV,” November/December 2016). I miss her always, but never more than during this election season when I feel she would have offered reason and solace to all. She always instinctively knew how to heal the hearts and minds of the world.

What a fantastic biography of an amazing woman! Very proud to be a Cornellian and see Dr. Brothers’s legacy live on.

SPEAK UP! CAM encourages letters and comments from readers on the magazine’s content. They may be edited for length, clarity, and civility. We are not able to publish and respond to all correspondence received. Send to: Editor, Cornell Alumni Magazine, 401 East State Street, Suite 301, Ithaca, NY 14850; jeb375@cornell.edu; cornellalumnimagazine.com.