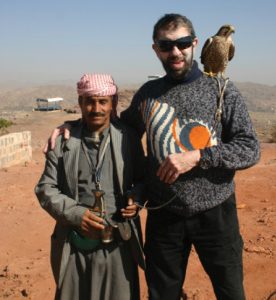 Veteran traveler Albert Podell ’58 (right) with a falcon trainer in the mountains of northern Yemen.

Last year, Albert Podell ’58 published Around the World in 50 Years, his memoir about visiting every country on the planet. He accompanied that volume with a Kindle book, The Survival Guide for the Adventurous International Traveler, which offers detailed tips on everything from packing to preventing sickness to his regimens for pre-trip physical conditioning. In this excerpt, he shares his road-tested tactics for concealing the large amounts of money he often has to carry en route.

I keep my stash of cash—which often has to exceed ten thousand dollars, euros, pounds, or rand in these un-automated lands where ATM means Always Take Money—divided into at least six little piles of large-denomination bills that are cleverly (I hope) concealed in six inconspicuous and unexpected places.

I never carry a wallet abroad because it is both a bulging, tempting target and contains too many cards and licenses I don’t want to lose. Some anti-theft experts recommend carrying a bulging “decoy wallet,” so that if you are held up by bandits pointing weapons, you have something to hand over. This makes no sense to me, and I never do it. For one thing, that bulge may well attract undesirables who otherwise would have passed you by. Second, you’ll need several dozen extra decoy wallets to sustain you through the repeated robberies you’ll encourage. In town, I never carry more cash than I’ll need that day, and that cash I divide and diversify, with a few bucks in one pocket, a few more in a baggie hidden behind top-quality toilet paper in another pocket, a credit card in a third, a photocopy of my passport in the fourth, and the major part of the cash concealed in what looks like an ordinary belt to hold up my pants but has an undetectable, hidden zipper compartment.

When I’m traveling on a linear route from one country to another, I have no choice but to carry all my cash with me, which I conceal in at least four places:

• I wear the aforementioned belt, available from L.L. Bean, which has a long zipper on the inside that conceals a compartment into which I can fit $1,500 in folded hundred-dollar bills. Nobody ever thinks it’s anything other than a plain belt.

• I carry an 800-page Tom Clancy paperback, whose pages 100 to 650 I have hollowed out with a long razor or box cutter, into which I can fold many thousands of dollars. I put the book in my carry-on, sandwiched between a regular paperback on either side of it, and hold them all together with a sturdy rubber band so that nothing shows. No one has ever looked in there; in an X-ray scan, the money blends in with the pages.

• I slip foam sports insoles inside my sneakers and my hiking boots. Under each insole I lay, flat, ten one-hundred-dollar bills wrapped in a thin sheet of cellophane to protect against moisture. (More than ten bills makes walking wobbly.) As long as I don’t hike more than fifty miles, the currency is undamaged.

• Under my shirt, tucked below my paunch, I wear a very thin, silky, flesh-colored money belt that easily holds $2,000 without a revealing bulge.

• I have sewn a pocket inside one leg of my bush pants that accommodates about $4,000 without a bulge.

• As a final precaution against a major hit, I always leave a bit of easy money in one pocket to satisfy the petty larcenous.

My cash should thus be safe, unless I run into a psychic bandit, a felonious octopus, an Op Center aficionado, or a bad guy who has read this page.

I follow some precautions in hotels, especially the dumps where I usually stay, which do not have a safe. I use a small ski-lock with a six-foot retractable wire to thoroughly wrap my suitcase around a steel pipe or radiator. I use duct tape to affix my valuables to the underside of the removable top of the toilet water compartment. I wedge a chair against the doorknob at night to prevent entry. I sleep with my pepper spray under the pillow. 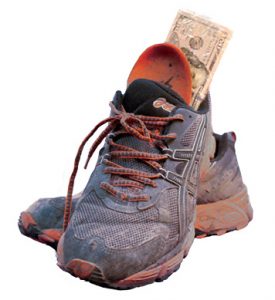 The end result? In more than fifty years of rather risky foreign peregrinations, I’ve been robbed of only a touch over $1,900. The perpetrators were: two pickpockets on a crowded (there are no other kind) bus in Mexico City on my honeymoon; a light-fingered, hard-pushing twosome on a tram in Tunisia; the police in Alexandria; a couple of kids who hit me when my hands were full of souvenirs at the Agricultural Fair in Zaire; a nocturnal beachcomber who slashed through the covering on our storage trailer while I slept in my tent on the shore of the Mediterranean near Algiers; a truckload of tough, rifle-toting tribesmen in the Khyber Pass, who stole my tools and car jack and are likely sharing them today with the late Osama Bin Laden’s operatives; some wayward kids who made off with ten liters of gasoline from the roof-rack on my guide’s Land Cruiser when we camped near the roadside in Burkina-Faso; and a cute hotel maid in Maui who, while I was out climbing Haleakala, hit my luggage and then hit the road.

Add it all up and it averages only $37 for each of my years traveling, which is less than I ineptly manage to lose each summer at our “friendly” group-house poker game—even when they allow me to use a scorecard that tells me if a full house will beat four of a kind. (It doesn’t.) Seems I’m safer with the bad guys on the road than with my buddies at my summer-share house. For background and comparison, and to remove any biased belief that all the bad guys live in the developing world, I’ve also been mugged three times and burglarized once in the States, for a total of $2,200, leading me to conclude that the anti-bandit techniques I use abroad do work, because the scorecard is about even between my losses at home and those on the road.

I only wish I could say the same for the New York Mets.