Many Cornell undergrads hold down jobs while earning a degree. Alex Hammond ’18 is likely the only one in University history whose side gig is running his hometown. 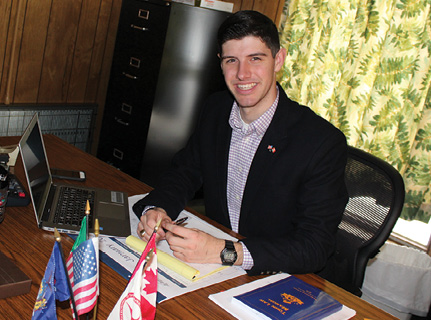 Hammond in his town hall office.Provided.

At twenty-two, the senior ILR major is town supervisor of Waddington, a small community at New York’s northern edge. Just across the river from Canada, Waddington boasts about 2,200 residents, some top-notch carp fishing, and an easy commute to jobs at several universities, including St. Lawrence, Clarkson, and two SUNY campuses. “If you’ve ever watched a Hallmark movie where there’s a small town, that’s us,” Hammond says. “It’s a very picturesque place, right on the river.”

Elected last fall on the Democratic ticket, Hammond unseated a one-term incumbent, garnering 55 percent of the vote. He took office in January—the position is akin to a mayor—and commutes from Ithaca weekly. He attends class from Monday to Wednesday and, after his last one gets out at 10 p.m., makes the three-and-a-half-hour drive north. “I like it because there aren’t a lot of cars on the road,” says Hammond, who eschews caffeine so he can sleep when he arrives at his parents’ house. “What keeps me going that late at night is cold water, music, and mint gum.” He’s in his town hall office all day Thursday and Friday plus half of Saturday, then returns to Ithaca and does it all over again.

A Waddington native—“Technically I was born in Ogdensburg, right down the road, because that’s where the hospital is”—Hammond first gained local fame as one of four teenage members of a Beatles-inflected rock band that twice played the State Fair. He spent his first two years of college at a military school in Pennsylvania, graduating with an associate’s degree and an Army commission. On the Hill, he’s been extremely busy: on top of his ILR studies, he is an active member (and past vice president) of Seal and Serpent fraternity, works at the Cornell Store, participates in the Mock Trial Association, mentors ROTC students, and plays drums as an unofficial member of the Pep Band. He also has training obligations as a second lieutenant in the National Guard, to which he’ll owe eight years of service after graduation.

Hammond’s dad, a former UPS worker, is the longtime president of his Teamster’s Union local; his mom also has a union job, as a secretary at SUNY Potsdam. “I grew up heavily union influenced,” he says. “But also I have some very conservative grandparents, so I’ve gotten both sides of the spectrum.” His own foray into politics began when he was in Waddington last summer, working at a golf club and contemplating the LSAT; it was his first extended stretch there in years, and he saw his hometown with new eyes. One thing that struck him was its youthful brain drain: as in many Upstate communities, kids tend to go away to college and settle elsewhere. “Waddington’s biggest export is our youth,” he says. “That was one thing I ran on—that if you elect me you’re telling your kids, ‘You don’t have to leave to become something.’ ”

Realizing that the incumbent town supervisor was running unopposed, he decided to throw his hat in the ring the day before petitions were due; two high school friends helped him garner the required signatures in a matter of hours. The campaign’s big debut was at the town’s homecoming parade in early August, when Hammond pressed the flesh alongside a float and dozens of T-shirt-clad supporters. He knocked on doors, raised about $5,000 in donations, took out newspaper ads, and invited the incumbent to a public debate (which she declined). “When I found out that Alex was running for town supervisor, I wasn’t at all surprised,” observes one of his ILR professors, Allison Weiner Heinemann, who cites the “incredibly insightful” work he did on a paper exploring Waddington’s mental health policies. “It seemed like the logical progression for someone who had discovered that what we teach and learn here extends far beyond the classroom.”

On election day, Hammond garnered 465 votes to his opponent’s 387. The win, at age twenty-one, tied the record for New York’s youngest-ever town supervisor. These days, as he winds up his final semester, he’s working to make good on his campaign pledges, such as live-streaming town board meetings—a proposition that’s more complicated than it might seem, he says, given that the town doesn’t even maintain an official Facebook page. With the aim of increasing revenue, he’s pondering out-of-the-box solutions—from a Waddington affinity credit card that would return a percentage to town coffers to the possibility of winterizing a beach caretaker’s cottage so it can be rented out on Airbnb in the off-season. He acknowledges that since he’s young enough to be the child (or even grandchild) of most town officials, he has to be respectful of the status quo while advocating change. “The last thing I want to do is pretend I’m the new sheriff in town, because I’m not going to know every answer,” says Hammond. “But I do bring a different perspective. We can learn from each other and work together, and so far we’ve done a pretty good job.”

In Waddington, town supervisor isn’t a full-time position—it pays around $10,500 a year—and Hammond is applying for post-graduation jobs in the area. While his early political success has prompted inevitable questions about his wider ambitions, he says he doesn’t have a roadmap to higher office. “Is there politics in my future? Who knows?” he muses. “I might hate it after the four years, but right now I absolutely love it and I’m honored to be in this position. Whatever I can do for the betterment of Waddington and the people of northern New York in general, that’s what I want to do.”