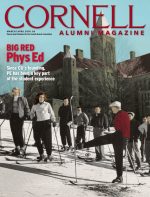 Our feature on physical education, “Get Moving” (March/April 2018), prompted many reminiscences from readers about their own PE adventures—including one who phoned CAM to identify himself as the instructor in our cover photo of a ski class on Libe Slope in 1950. Walter “Wally” Ainsworth ’49, BA ’50, co-founded the club depicted in the photo; members got five lessons for $10. “We were limited in what we could teach,” admits Ainsworth, now ninety and living in Montana, “because there was not much of a slope.”

A sampling of other PE memories:

Had to take a year of dance when I entered in 1956—hated it. My senior year I took gure skating lessons. Loved it—the quiet swoosh of gliding, the sudden stops with the toe pick, the leaning into inside and outside edges. Practiced every chance I got, and although I’m slower, I’m still skating.

One spring, I took intermediate equitation. The horses, excited by their first outdoor ride of the season, took off at a gallop, throwing riders left and right. I ended up on my horse under a clothesline in a farmyard. Fortunately, all riders and horses ended up in good shape.

My most embarrassing memory: indoor golf. It was set up inside a barn-like space, with target bedsheets hung at one end. I would take my stance, line up all my parts, address the ball—and miss. Never did get the hang of it.

Modern dance, Martha Graham technique, required of freshman women— liked it enough to take an extra semester. Bowling at a down-at-the-heels alley in Collegetown. Riding Cornell’s retired Army horses who really wanted to stay retired. Lots of choices, even then.

I took skiing at Greek Peak for two semesters. It cost about $65 for six sessions, which included transportation, rental skis, lift ticket, and a ninety-minute lesson. What a life-changing deal for a poor college student! Recently I paid double that for a one-day lift ticket.

To pass windsurfingng, we had to spend at least sixteen hours on the water—but I had only done thirteen by the last week- end, so I put on my wetsuit and went out in the season’s worst snowstorm.

I barely passed the swim test because I went too fast on my first lap and tired myself out. I managed the final length, but the tester recommended I take basic swimming anyway. As a horse-crazy girl from New York City, I had my heart set on riding, though, and signed up for that.

Although we only needed two semesters of phys ed, I was so impressed by the courses offered that I took four. Where else but Cornell could I take scuba diving, horseback riding, ice hockey, and advanced lifesaving?

I took riflery with my apartment-mate, Jeff. I was not very good, so I devised a new tactic: I started shooting at Jeff’s target. He never did figure out why he did so poorly. 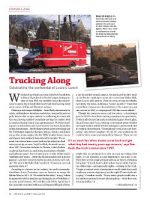 Your story about Louie’s Lunch (Cornelliana, March/April 2018) brought fond memories of my freshman year in the University Halls. A favorite then was a sub made on a hoagie roll with pieces of hamburger patty steeped in tomato sauce. I believe it was complemented with a topping of Cheez Whiz. Many runs to the truck were made in the dead of winter, when it was common to attempt to sneak out without being seen with a coat—otherwise your order would be inflated by requests and cash from up and down the hall, turning a ten-minute expedition into a half-hour or more.

I was a chem major and often worked late in Baker Lab. I would stop to get a snack and a drink as I walked from Baker back to the SAM fraternity house at 210 Thurston Ave.

Went with a friend and got a pizzaburger. Was hooked. Snooty date insisted on roast beef.

With the opaque announcement of the sudden departure of the dean of the College of Business (From the Hill, March/April 2018), Cornell continues to rank at the bottom of U.S. educational institutions when it comes to transparency. Consider that no adequate explanation has ever been provided for the resignation of Jeffrey Lehman ’77 as president and that fifty years on, we are only now beginning to learn the facts about the Res Club fire of 1967 that resulted in the deaths of nine students.

The print edition of our story on Melissa DeRosa ’04, MPA ’09, top aide to New York Governor Andrew Cuomo, mistakenly stated that her master’s degree was from ILR. In fact, it was earned through the Cornell Institute for Public Affairs, now housed in Human Ecology.

CAM encourages letters and comments from readers on the magazine’s content. They may be edited for length, clarity, and civility. We are not able to publish and respond to all correspondence received. Send to: Editor, Cornell Alumni Magazine, 401 East State Street, Suite 301, Ithaca, NY 14850; jeb375@cornell.edu; cornellalumnimagazine.com.