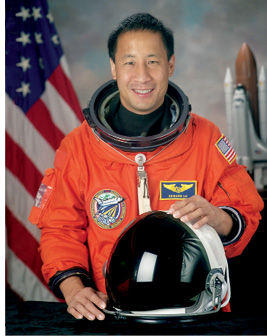 Former astronaut Ed Lu ’84 logged two shuttle missions and spent six months on the International Space Station. These days he’s devoting himself to protecting Earth from a cosmic threat: the asteroids that periodically strike the planet. Lu is a co-founder of the B612 Foundation, a nonprofit that aims to build an asteroid-detecting space telescope, dubbed Sentinel. The $450 million project has suffered some setbacks, including slow fundraising and NASA’s recent termination of an agreement to provide operational assistance.

There have been two big Hollywood movies—Armageddon and Deep Impact—about asteroids striking Earth. Were they even a little accurate?
For how you’d stop an incoming asteroid, no. For the consequences, maybe—although they both get wrong how big an asteroid needs to be to cause enormous damage. In one they say it’s the size of Texas; well, something that size would sterilize the Earth. The one that wiped out the dinosaurs was just a little bigger than Ithaca, and it killed off 90 percent of species and heated the atmosphere to 500 degrees.

Last September a killer asteroid was allegedly headed our way. How did we survive?
I hear about such predictions twenty or thirty times a year, and let’s put it this way: at any given time, there are multiple statements by uneducated sources on the Internet. I don’t lose a lot of sleep over it, any more than Elvis sightings. It’s really in the same category.

You could’ve done a lot of things after NASA. Why asteroid defense?
As an astronaut, every day you look at the moon and see it’s covered in craters—and you look at the Earth and realize it gets hit even more often. In fact we’d have more craters than the moon if it weren’t for our atmosphere and oceans that cover them up. So it hits you in the gut, and you realize at some point we have to solve this problem. This is the only global-scale natural disaster we have any ability to avert.

The B612 Foundation is named for the asteroid that the title character lives on in The Little Prince. Why?
One of the book’s messages is that sometimes adults don’t understand what’s important; there’s a phrase, “What is essential is invisible to the eye.” And in fact, it’s true here on Earth: maybe the most important thing is something that people never bother looking up to see.

How much danger are we in, really?
These things are rare—but if you wait long enough, rare things happen. It’s not just the big civilization-enders we’re worried about. An explosion the size of a nuclear weapon happens every couple of decades. When you realize that solving this isn’t that expensive—maybe one-quarter of 1 percent of NASA’s budget, roughly the cost of a large freeway overpass—you realize it’s something we ought to do.

So what can we do about it?
If an asteroid is still years from Earth, the change in its speed you need to make is tiny—on the order of a few millimeters per second—and the easiest way to do that is to run into it with a spacecraft. But the real sticking point is that we have to find it first. You need to know years in advance that something’s on its way.

What size asteroids should we worry about?
Anything large enough to destroy a city, because asteroids smaller than that tend to explode higher in the atmosphere. The asteroid that hit in Tunguska [Siberia] in 1908 had hundreds of times the explosive energy of the Hiroshima bomb, and that was about 140 feet across.

Are governments taking this seriously enough?
They’re beginning to. For instance, the National Science Foundation recently funded the Large Synoptic Survey Telescope, which will find a large number of these asteroids—not all, but it’s a good first step.

How is the Sentinel project going?
We’ve made huge progress. We’ve built prototypes and passed our first major technical review, but we haven’t been able to raise the money to build the spacecraft. We’ve been trying to fundraise privately, but it’s been difficult. We’re looking to see if there are other ways to fund this, perhaps through government support or a public-private partnership.

Is this issue especially hard to tackle because it affects the whole planet—and therefore, no one in particular?
There’s clearly a bit of that. I call it the “inverse tragedy of the commons”: it’s everybody’s problem and nobody’s.

Is it going to take a close call to get people’s attention?
I don’t think so, because we’re already on the way. B612 has catalyzed a lot of things in the last ten years. I believe that in the next two decades we’re going to re-engineer the solar system so the third planet doesn’t get hit by large asteroids anymore. I also believe that some time this century, we’re going to have to deflect an asteroid for real.