When Art Leonard ’74 and Mark Schwartz ’74 set out to start an organization for gay and lesbian alumni in 1979, they faced a hurdle: since many Cornellians hadn’t been out during their time on the Hill, finding potential members to invite was difficult. A letter published in the Alumni News—seeking “gay alumni all over the country who would be interested in getting to know other gay Cornellians”—received just a handful of responses. A few months later, in late June 1980, some of those new members gathered to walk down Fifth Avenue in New York’s annual Pride march. Carrying a red cloth banner with “Cornell Alumni” in white letters, they were met with boisterous cheers from onlookers. “Alumni started joining us; they just stepped in from the sidelines when they saw our sign,” Leonard recalls. “It wasn’t very many, but every additional person knew someone else who was interested in our group and could spread the word. After that, our social gatherings got bigger.” 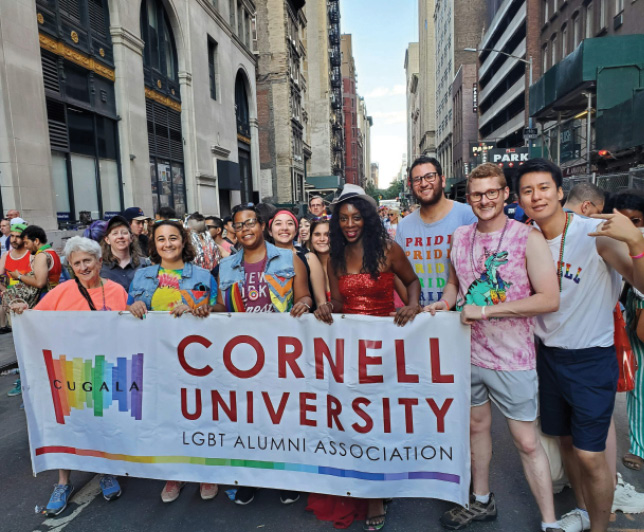 Over the past four decades, that small cadre has grown into the Cornell University Gay and Lesbian Alumni Association (CUGALA), a thriving network of some 4,000 Big Red grads—as well as faculty, staff, parents, and friends—around the world. Their mission is to make the University a more inclusive place for LGBTQ Cornellians through community service, mentorship programs, advocating for resources on campus, and more. “This group is about supporting each other as people and as Cornellians,” says current CUGALA president Olivia Tai ’08, BA ’10. “For me, it’s about maintaining a community and contributing to the world. For many of our alumni, it’s about supporting LGBTQ students in ways that they themselves didn’t feel supported while they were at Cornell.”

One of the first alumni associations of its kind in the U.S., CUGALA was founded about a decade after Cornell’s Student Homophile League, the second gay rights group ever organized on an American campus. In the late Nineties, CUGALA established a fund for the library to purchase gay- and lesbian-related content, which eventually became part of Cornell’s renowned Human Sexuality Collection. More recently, the organization has fundraised and advocated for on-campus facilities such as the LGBT Resource Center and the Loving House, an LGBTQ program house located in Mews Hall on North Campus. And in 2014, CUGALA held its first LGBT Reunion on the Hill; the next is planned for summer 2021. “That was a huge step for us,” says Tai, who explains that many of the group’s older members attended the University at a time when discrimination against LGBTQ people was rampant in the U.S. “It was a chance for alumni to reconcile bitter experiences and see that there is an opportunity for them to reclaim what it means for them to be a Cornellian.”

With chapters in New York City, San Francisco, Los Angeles, Philadelphia, and Washington, D.C.—and more in the works—CUGALA members organize dozens of get-togethers every year. This summer, due to the coronavirus pandemic, they’re taking their programming online, with such events as Zoom discussions (on topics like the struggles of dating in the era of social distancing) and a virtual Pride party complete with a DJ and a raffle for rainbow-themed Cornell merchandise. “When it comes to LGBTQ people, the term ‘chosen family’ came out of the social isolation one would face if they didn’t have a lot of family support—or even outright rejection,” says Tai. “A lot of us found our chosen family at Cornell, and that has extended into our life as alumni.”