Regarding the March/April 2017 article “More than Meets the Eye”: We loved it.

We did more research and came up from New Jersey to track down the locations (left the tunnel out!). What fun. We have spent much time on this great campus over the years, but these were all surprises.

We could not find the driftwood version of Barbara McClintock ’23, PhD ’27, on the shed. We spent time asking and exploring, but could not find it. Any ideas?

From the editors: There were concerns that the sculpture of Barbara McClintock was too delicate to be left outside, so it has been moved to the main hallway in the Plant Science Building (below).

I seem increasingly to be looking forward to reading Cornell Alumni Magazine pretty much cover to cover. And I have been wondering why. My undergrad years were marked more by external events than making full use of the opportunities on campus. The war in Vietnam, dealing with the draft, the Kent State shootings, marching in Washington, and the Willard Straight occupation all seemed to dominate my undergraduate life more than what was being offered academically. Sometimes I regret that a bit, but overall I wouldn’t change anything. I love that Cornell provided me with the opportunity to form my lifelong values and goals while being in such a wonderful academic, athletic, and artistic surrounding.

So, what about my bi-monthly encounter with CAM? I appreciate and embrace its portrayal of life on campus, the academic achievements, and the unwavering dedication to equal educational opportunity. It’s not just nostalgia, although I have plenty of that. Rather, I think that CAM reinforces the central role that Cornell University has played in shaping my life. I am proud and thankful to be a Cornellian, and I dearly appreciate the reminder of this when CAM arrives.

In the May/June issue, President Martha Pollack expressed a strong commitment to Cornell’s tradition of diversity. She noted that “better solutions to challenging problems are achieved when multiple perspectives are brought to bear,” and she pledged that, “On my watch we will continue to honor and support the rights of people of all backgrounds and perspectives to be a part of Cornell.” In the same issue, Olivia Corn ’19 made clear that in her experience some perspectives are conspicuously lacking at Cornell.

Ms. Corn, who was then president of Cornell Republicans, put it this way: “As a conservative, having faculty members who are liberal has given me the ability to engage in debate and possibly challenge my own assumptions. There are thousands of people on this campus who aren’t exposed to that kind of opposite opinion.” For those who missed the interview with Ms. Corn [“Politics as Unusual”], it should be noted that, while seeking conservative enrichment of the faculty, she is a liberal on social issues and her views are hardly those of an “orthodox” Republican in 2017.

A lack of intellectual diversity among faculty members is clearly not unique to Cornell, having been observed and documented throughout academia. If President Pollack can stimulate efforts to bring some balance to Cornell in that area, she will have made a major contribution to the school.

I read with great enjoyment your article on the Dead’s Barton Hall 5/8/77 show (March/April 2017). I was the stage manager and, just before showtime, was asked to be in the center of the security pit between the audience and the stage. Between sets, with the audience being “horribly smashed,” we handed out cups of water. For those needing more relief, we hoisted them over the security wall, under the stage, and out the rear door of Barton to be revived by the snow that was falling by then. 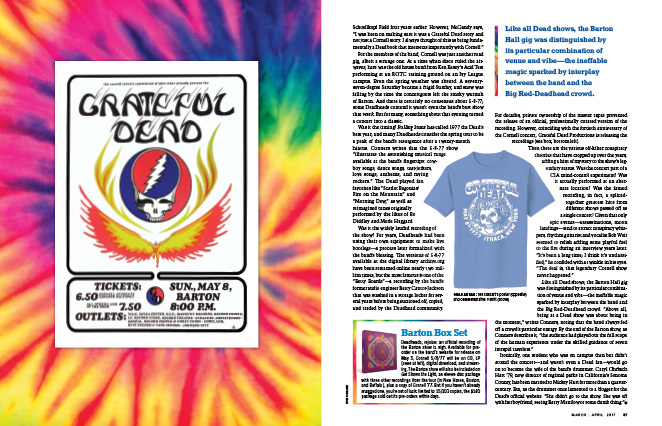 At the 40th anniversary replay of the show at Phil Lesh’s Terrapin Crossroads club in Marin County, CA, the question most often asked of me (I was wearing my Cornell Concert Commission shirt) was, “Did it really snow after the show?” For those of us actually there, we know the answer is yes.

Looking forward to the 50th anniversary. 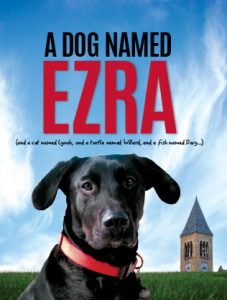 In the May/June 2017 issue we asked readers to add their Cornellian-named pets to the list of dogs, cats, turtles, fish, children—and more—we published in “A Dog Named Ezra.” David Harding ’72 responded: “When my wife brought home a betta fish in a small tank I certainly couldn’t resist naming it Hans” [in honor of Nobel Laureate and CU professor Hans Bethe].

SPEAK UP! CAM encourages letters and comments from readers on the magazine’s content. They may be edited for length, clarity, and civility. We are not able to publish and respond to all correspondence received. Send to: Editor, Cornell Alumni Magazine, 401 East State Street, Suite 301, Ithaca, NY 14850; jeb375@cornell.edu; cornellalumnimagazine.com.