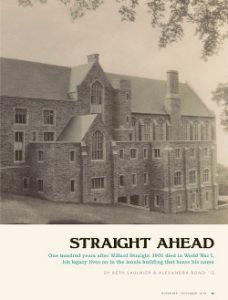 “Straight Ahead” (November/December 2018) prompted many alumni to share their memories of Cornell’s student union.

My memory was jogged by the description in the print article about the gender segregation in parts of the Straight. When I was told junior year that no women were allowed in the pool room, I convinced my now-husband, Marshall Frank ’61, BChemE ’62, and our best friends to defy the ban. We went up and played part of a game together. We received a few glares from the men in the room, but nothing was said to us, and after a while we got bored and left. We thought that was the end of the escapade, but the next day a Daily Sun article called out the blasphemy of the co-eds who had invaded the male sanctity of the pool room. We have been anonymous to this day; my cover is blown!

My first experience at the Straight was the fall day in 1948 when my father dropped me off to begin my freshman year; I was on a wait-list for a dorm room so had nowhere to take my stuff. I joined the Straight’s Men’s and Women’s Activities Committee my freshman fall and served on the board of directors senior year. The Straight had wonderful staff to guide us, and my participation probably prepared me for my business career better than any class. One of our biggest events was the building’s twenty-fifth anniversary, when Willard’s widow came for a celebration.

The Help Desk was Cornell’s own early-gen Google; 2-3456 was the number to call from your dorm room phone. I was one of three student night managers at the Straight from 1979 to 1981, and it was a highlight of my years at Cornell.

One of my fondest Straight memories is the ritual of spending all study week in the Memorial Room, often sleeping there in a chair or on the floor, to “review” course work before finals.

I used to study in the music room, eat in Okenshields, and watch movies at Cornell Cinema. I belonged to clubs that had offices in the Straight and took part in many demonstrations in front of it. I was back recently, and I still love that building. I hope the renovations don’t destroy its historical character and coziness.

The browsing library was, and I hope still is, a place to escape from the “Ithacation” that falls from the skies above Cornell. Then there were the Dramatic Club productions, WVBR, Cornell Cinema, the pool room, the Straight Desk—and of course the Ivy Room, which served wonderful, high-cholesterol omelets.

Folk singer Pete Seeger [performed in the Memorial Room] in the late Fifties. During a lumberjack song, he whacked a tree stump with an axe after each phrase or verse. What resonance!

My roommate introduced me to my husband on the steps of the Straight my second day on campus. I remember people gathered to watch the “Luke & Laura” drama on “General Hospital” in the afternoons and I still have items I purchased at craft fairs there. My first taste of Thousand Island dressing was on a Straight Burger!

As a fourth-year in engineering physics, I secured a summer job as a lab assistant. I was assigned to acquire a thin-walled aluminum container to ship a single crystal of sodium, and a friend suggested I use a lathe in the Straight craft shop to “spin” the container from a flat aluminum disk. The technique worked, and I proudly received my fifteen minutes of fame from my associates in physics.

Who can forget “Straight Breaks” and “Face Time at the Straight”?

I remember watching the first Vietnam War draft lottery on TV in the Straight in 1969. When the first (low) numbers were drawn, it was hard to watch a student hearing his birthday called. The memory of these scared men crying in front of their friends and classmates still haunts me.

The idea that Straight requested his widow do something “to make [Cornell] a more human place” is more than quaint, but that’s exactly what she did. Very rarely do I find myself wallowing in Big Red nostalgia, but this piece left me helpless.

My experiences at WSH included: discovering the Sunday evening buffet as a freshman; being stunned in the Music Room the first time I heard Carmina Burana; being moved by a production of The Fantastiks; enjoying the ribald and raucous Lysistrata; and the time I stayed over Thanksgiving, enjoying some popcorn the kitchen staff made in a fireplace.

In the early Fifties, architect Frank Lloyd Wright was on campus; one appearance was a luncheon in the Straight with architecture students, including myself. He had previously described the University of Pittsburgh’s Cathedral of Learning, a Gothic skyscraper, as “the biggest keep-off-the-grass sign in the world.” As we walked into the Straight, he was applying similar comments to its architecture; this continued through the building and into the dining room. I ended up sitting across from him and noted that, in spite of his dislike of the architecture, he really enjoyed his lunch.

I was saved my freshman year by the browsing library, a peaceful refuge from University Hall. I was particularly impressed by a person who tactfully enforced the no working rule (if it involved writing). When I wanted a break from reading, I could turn to the excellent collection of cartoon books.

It was the center of my life at Cornell. From playing pool to eating in the Ivy Room to napping in the library, it was a respite from my busy college life. Thank you, Willard!

As part of my scholarship, I was given employment busing tables in the Ivy Room; part of our training was learning to snap a towel at dogs to keep them off the tables. We were told to ignore the disappearance of trays used for sliding down Libe Slope. During an eight-hour shift, the repeats on the jukebox were endless. Biggest hits: “Scotch and Soda” and “The Man who Never Returned” by the Kingston Trio and “Big Girls Don’t Cry” by Frankie Valli.

The Straight was an important place for me, arriving as a transfer and working summers as a lifeguard. I often took meals at the Straight, and I appreciated the use and comforts of the library and also the Cornell Cinema summer offerings.

By some quirk of fate, I was assigned waitressing duties in the faculty dining room. On the stairs leading down to it, my husband-to-be, Gordon Clement ’44, BChemE ’47, first kissed me as he left for Navy duty in the Pacific. We were married in Sage Chapel when I graduated. Whenever we were back for Reunion, we went to those stairs for a kiss!

Willard Straight is honored on a plaque with other Delta Tau Delta brothers who gave the “supreme sacrifice” for our country. He is interred at the American Battle Monuments Commission Cemetery outside Paris, as are at least two other Cornellians, Jesse Morse Robinson 1916 and Frederic Drake 1919.