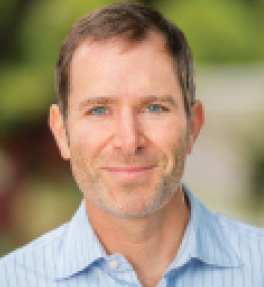 Matthew Sade, MBA ’97 (above), is CEO of Kite Hill, maker of almond-based yogurt (left) and aged cheese, among other vegan products.

“We bring nuts in at one end,” says Matthew Sade, MBA ’97, “and cheese goes out the other.” That modern-day alchemy happens in an industrial park in the Bay Area city of Hayward, California, in space that once housed a Shutterfly photo-printing facility. Now it’s home to Kite Hill, a maker of almond-based “dairy” products that—evinced by plaintive post­ings on the company’s Facebook page, at any rate—have vegan food lovers clamoring for more. After Kite Hill introduced its new line of yogurts late last summer, cartons were known to vanish from store shelves within hours, prompting the company to double production in an attempt to meet demand. “Why is this soooo very dif­ficult to find?” one frus­trated yogurt fan wondered on Facebook, going on to lament: “So annoying that Kite Hill products are not consistently shelved in Whole Foods as your products are seriously superior.”

As business headaches go, it’s an enviable one. The four-year-old company, with Sade as its CEO, has garnered numerous raves from food bloggers and the mainstream media; Food & Wine ran a piece about its French-style cheeses under the headline “Genius and Delicious.” Until now sold only at Whole Foods stores, the company’s products will soon be available at other retailers and online from its own Web store. “We’re seeing a wholesale shift in consumer behavior,” says Sade, noting that the market for almond milk has been growing annually while demand for the bovine version has been on the decline. “This is not a trend or a fad. This is a shift that has to occur, because the number-one contributor to greenhouse gas emissions is the animal livestock industry. Globally, we can’t sustain the amount of dairy that’s been consumed on a per capita basis.”

But taste matters; whether con­sumers seek out vegan alternatives to traditional dairy-based foods for environmental reasons or for their own health, they’re unlikely to stick with them if they don’t please the palate. And plant-based takes on cheese, yogurt, and cream cheese have historically been—to put it charitably—unconvincing. “Let’s be honest; non-dairy cheese has been the butt of food industry jokes since the health-food days of the Seventies,” says Sade, an omnivore whose résumé includes a stint at Starbucks and the founding (and sale) of one of the nation’s leading sustainable meat companies. “Today, if you go to any good natural food store, you’ll find lots of non-dairy cream cheeses, and 100 percent of them are made from oil and starch. They’re trying to make something that approximates the taste of cheese—as opposed to what we do, which is make cheese.”

‘Making plant-based dairy products that taste good seems like such a simple premise, but in practice it’s incredibly difficult.’

What sets Kite Hill apart from its competitors, Sade stresses, is its confluence of classic technique and modern technology. One of its founders is a Stanford biochemist, who—for the first time ever—devised a way to make cultured dairy-style products from nut milks. Rather than being processed to resemble cheese, Kite Hill’s wares are produced via the same methods that have been used for centuries, except with milk from almonds rather than from a cow, sheep, or goat. “Cheese at its essence is a biochemical reaction that occurs when you add cultures and enzymes to milk, it forms a curd, and you drain the whey,” he says. “No one had ever been able to form a curd from a milk that didn’t come from an animal, because the protein in animal milk is very specific. Making plant-based dairy products that taste good seems like such a simple premise, but in practice it’s incredibly difficult. If it’d been easy, someone would have done it before now.”

The company’s French-born cheese­maker designed its custom-built production facility, which takes almonds from California’s Central Valley and processes them into milk, which is then pasteurized and transformed into Kite Hill’s various product lines: five flavors of yogurt; two kinds of cream cheese (plain and chive); ricotta; two types of chèvre-style soft cheese (original and truffle-herb); and an aged, rinded cheese resembling a young Camembert, albeit with a more tofu-like consistency. Kite Hill also sells fresh ravioli and cheesecake made with its ricotta, which are produced at an outside facility. (Additional products are in the works; Sade let CAM into Kite Hill’s test kitchen to sample some of them in September, but swore us to secrecy.) Prices range from just under $2 for a carton of yogurt to around $10 for a four-ounce cheese round, roughly the size of a hockey puck. 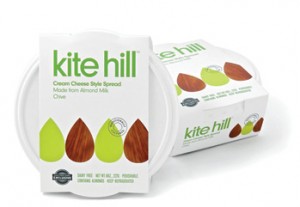 For Sade and his colleagues, one abi­ding source of frustration is that—thanks to the federal Milk and Milk Products Act of 1947—Kite Hill can’t actually label its products as “cheese.” Although it can use the terms “ricotta” and “cream cheese style spread,” it has to call its hand-made cheese rounds an “artisan almond milk product”—which doesn’t exactly trip off the tongue. “It’s linguistic gamesmanship that we play, lest we run afoul of gov­ernment regulations,” says Sade, noting that some other purveyors resort to labeling their wares as “cheez.” “It’s terrible. There’s no taste appeal in the word ‘product.’ ”

And what of the alleged ills of the almond industry, which has been slammed for its water-guzzling ways—particularly the startling statistic that it takes a gallon to produce a single nut—as California endures an ongoing drought? Sade offers a number of counterarguments, including the fact that the state’s number-one agricultural water user is alfalfa, which is grown to feed dairy cows. “Anytime you replace traditional dairy with a plant-based product, it’s a net positive for the environment,” he insists. “We don’t pollute the water or air; in fact, the trees sequester carbon, which is the anti­thesis of what cows do. I don’t think anyone would argue that almonds aren’t a thirsty crop—but they’re exponentially less thirsty than cows.”