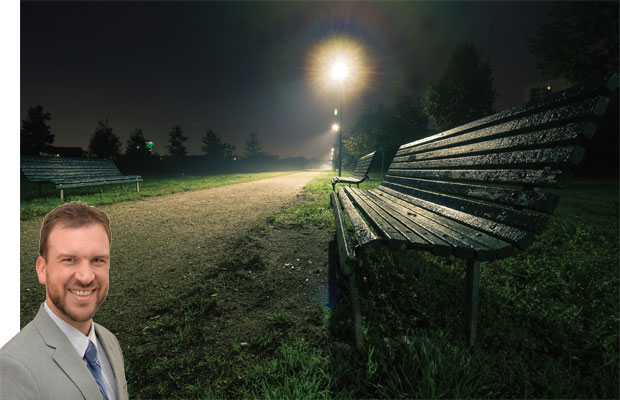 To the negatives of standard time—not the least of which is getting out of work in the pitch dark—add one more: a higher risk of getting mugged on your way home. Last fall, the Review of Economics and Statistics published a paper in which Nicholas Sanders, an assistant professor of policy analysis and management in Human Ecology, and a colleague at the University of Virginia analyzed national crime figures. They tallied a sharp drop in robberies when the U.S. shifts to daylight saving time, which this year begins on March 13.

Why study the relationship between daylight saving time and crime?

During the Great Recession, a lot of poorer areas considered decreasing public lighting to save money. But it’s difficult to determine what happens to crime rates in those areas when the light goes down, because a bunch of other things were changing at the same time. So we needed a way to randomize the amount of light present at any given time and see if there were changes in crime associated with that. Daylight saving time allowed us to get at this larger question of, “How are criminals adjusting behavior in the face of a higher or lower probability of being spotted, or being recognized after capture?”

What did you find?

During the transition into daylight saving time, we see a decrease in criminal activity—specifically robberies, which is somebody coming face to face with someone else and demanding they give them something, like a mugging. Those decrease by about 7 percent after daylight saving time kicks in, which is driven almost entirely by a 27 percent drop during the evening—those big commuting hours of 5 to 7 p.m., when the number of available people upon whom one could commit a crime is greatest. So when there’s more daylight during high-crime times, we see an overall decrease.

One potential economic theory says that criminals would reallocate their behavior across time. But if you look at the general crime trends, very little robbery happens early in the morning. We can’t really speak to why without getting more into criminal sociology, about which we’re not experts.

Could it be because criminals don’t tend to be early birds?

This is a common joke that pops up because of this paper. I don’t like to do anything in the early morning either, so I can completely understand how that might be the case.

So is one argument in favor of making daylight saving time year-round that it would lead to a decrease in crime?

There are some caveats. One is that there would be other costs; for example, driving when it’s darker in the morning is more dangerous, so it would probably increase traffic accidents. Another caveat is that the result we found could well be due to the transition itself—which is to say that if daylight saving time were made permanent, in the long run individuals who engage in criminal behavior could change their patterns, so the effect gets negated.

In short: are muggers the only people who like to see daylight saving time end in the fall?

[He laughs.] I wouldn’t go that far. But your point is well made.