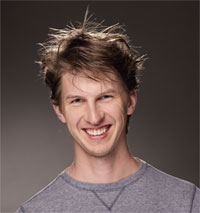 If you’re on Facebook—and given that it has a billion users worldwide, you probably are—you’ve sampled Lars Backstrom’s handiwork. Backstrom ’04, PhD ’09, is in charge of the social networking site’s most visible product: the News Feed. It’s his job to ensure that the items that appear in the feed are as compelling as possible—be they snapshots of your foodie cousin’s kale salad; the latest political screed from your brother-in-law; or that viral video of a baby panda that your college roommate just shared. “Our core mission is trying to figure out, of all the things that we could show you in your News Feed, which ones are most relevant to you,” says Backstrom, an Engineering alum who oversees a team of about sixty. “A lot of personalization goes into that. You have lots of friends; they post lots of different things. We want to figure out who are the people you really care about. So of all of the things that your friends have done, of everything that thepages you’re connected to have posted, which of those would be the most interesting?” 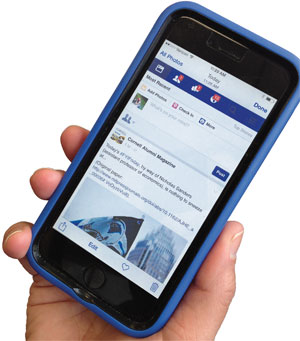 To answer that question, Backstrom’s team is constantly refining the algorithms that assess a post’s relevance to a particular user. It’s an exquisitely complex—and, of course, proprietary—system, but Backstrom notes that one of the basic ways that it judges success is simply whether a user demonstrates interest by sharing, commenting, or hitting “like.” “If we showed you a story and you didn’t interact with it at all, just kept scrolling down, that was a miss on our part,” says Backstrom, chatting last fall at Facebook’s cavernous Menlo Park headquarters (in a conference room, labeled The Wicker Man, that’s one of several named after Nicolas Cage movies). “So we’re using these statistical techniques, this large-scale machine learning, to try to do better.” While the typical user likely can’t tell if the system isn’t operating optimally, Backstrom says, he often just has to glance through his own feed to know that something’s amiss. “If you’re the average person, you come to Facebook and some of the stories just seem a little bit better than others,” says Backstrom. “Whereas I can tell, ‘Oh, something’s broken here. This is not the order that they should have been in. Here’s a story I saw before; that shouldn’t have happened.’ ”

Backstrom’s work at the interface of computer science and social networks goes back to his graduate days on the Hill—which, as his collaborator and former thesis adviser Jon Kleinberg ’93 notes, coincided with the emergence of sites like Facebook, Twitter, and YouTube. “Lars, with his combination of talents—the problem-solving ability, the ability to think deeply and conceptually about things—was just what the field needed to help set its direction,” says Kleinberg, who holds an endowed professorship in computer science. “My collaborations with him have had a huge impact on my own research.”

A paper that Backstrom co-authored as a grad student remains a seminal work that’s regularly cited, Kleinberg says. “It was the first to ask a bunch of basic sociological questions from a computational perspective,” he says. “For example, if I look at someone’s online presence, can I predict which groups they’re going to join? Can I predict whether an online group is going to continue growing, or plateau? Can I predict how information will move from one group to another?” In another project from Backstrom’s grad days, he and Kleinberg proved that even anonymized social network data could be analyzed to reveal real-world identities. A more recent collaboration showed that by assessing the strength of links between Facebook friends, it was possible to identify someone’s sibling, romantic partner, or other close relation—which, Kleinberg notes, is important for the kind of News Feed optimization that Backstrom’s team aims for. “Some people, you want to know what they had for dinner and what walk they took,” Kleinberg observes. “Other people, you want to hear from them every couple of years, when they get a new job or have a baby.”

Backstrom grew up in a small town in Iowa, majored in computer science as an undergrad, and did an internship at Yahoo Research while a doctoral candidate. He joined Facebook in fall 2009—and, Kleinberg says, “quite quickly had a huge impact,” by developing its friend-recommendation system. In addition to curating the News Feed, Backstrom’s team is responsible for maintaining a robust technical infrastructure, so Facebook works seamlessly worldwide. “A big part of my job is just keeping the site running—so when you post something here in California, it’s available to all your friends in Europe in well under a second, which means we have to propagate it from here to all our other data centers,” he says. “You’re dealing with the scaling problems that come with having a billion people loading this website every day.”

Kleinberg, for his part, says he is “incredibly proud” of Backstrom and the influence his former advisee has had on their field. “Creating the engineering infrastructure for the News Feed has had a huge impact on how people experience the Internet,” he says. “From a computer science point of view, he’s created a system at Facebook that has amazing scale and power. And from the prospective of everyday life, there aren’t many people whose work is being experienced by a billion people a day.”

Why do some people swear off Facebook—and then go back?

When a Dutch advertising agency launched a project in mid-2014 to encourage people to go cold turkey from Facebook, Eric Baumer saw an opportunity. A research associate in communication and information science, Baumer studies topics relating to the non-use of technology, and one of his interests is the phenomenon of “social media reversion”: when people foreswear a networking platform but fall off the wagon. The Dutch effort, dubbed “99 Days of Freedom,” offered a plum chance for Baumer and his collaborators to ask participants why they joined the project, how avoiding Facebook made them feel—and, if they logged back on, why they couldn’t stay away.

Of the more than 40,000 Facebook users who signed up, about 5,000 consented to answer a research questionnaire at set intervals: one-third, two-thirds, and all the way through the project. In the end, Baumer and his colleagues found that roughly 20 percent of those in the study sample returned to Facebook. In analyzing why users did or did not go back, they identified a few general motives. Some people perceived themselves as addicted; Baumer cites one respondent who stated, “Every time I open my Internet browser, my finger just goes to the ‘F’ key, and I start typing ‘Facebook’ without thinking about it.” Those who used the site largely to manage other people’s opinions of them were more likely to revert; those who believed that their activity was being monitored were more likely to stay away. Another group that was more able to resist Facebook’s lure: those who reported themselves as being in a good mood.

While it may seem counterintuitive, the researchers found that the fear of missing out on posts from friends and family wasn’t a major motivator for returning; people who reported that concern were actually less likely to go back. “We think if the worst thing that happens is that you miss a couple of photos, then you think, Eh, no biggie,” says Baumer, whose findings were published in the journal Social Media + Society last December. “On the other hand, people who talked about a habitual draw—feeling like they have this compulsive urge—were far more likely to return. So we think what makes Facebook and similar technologies really attractive isn’t necessarily the social interaction and the connections with people. That’s an important piece, but what makes them so alluring, and so difficult to stop, is the habitual use: the idea that, ‘Every time I’m at the bus stop I pull out my phone and check Facebook.’ ”