Vanity Fair called it “a serene beauty oasis,” and that just about sums it up. Bluemercury is nirvana for the well-heeled cosmetics junkie: a chain of shops where you can get beauty advice and copious samples, have your eyebrows waxed, and buy anything from a $14 lip gloss to a $2,000 jar of moisturizer. You can even bring your dog along; there’s often a water bowl in the entryway. “We are a mom-and-pop business—super high service,” says cofounder Barry Beck ’90. “That’s how we’re changing the cosmetics world. People trust us. We’d rather have you leave with a free sample than ever get the wrong product.” 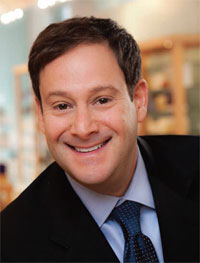 Beck is giving a tour of the company’s original location, on M Street in Washington, D.C.’s Georgetown neighborhood. Since buying a floundering cosmetics shop in 1999 and rebranding it, Beck and his wife and business partner, Marla, have expanded to nearly four dozen locations including three in Manhattan, seven in the greater D.C. area, and eleven in New Jersey. (The firm’s investors include Artal, the parent company of Weight Watchers.) His long-term plan: expand to 300 stores, take the company public, and go international. “We’re a neighborhood-friendly family business—that’s the feel,” says Beck. “Our model is hard to replicate, and I worry about that as the business grows. I think about it every day. I’m a worrier.”

Bluemercury has garnered glowing write-ups in a slew of beauty magazines, not to mention lifestyle publications like Real Simple and O. (The latter, which called it “a trendy spa-cum-boutique,” praised the $130 purifying facial, among its most popular treatments.) Its D.C. shops have attracted their share of boldface names, including the Bush daughters and Chelsea Clinton. Among his celebrity customers, Beck counts Nicole Kidman, John Travolta, Madonna, and members of Aerosmith. He once shut down a store for Rod Stewart. When Anna Nicole Smith was in town—back when her inheritance case was before the U.S. Supreme Court—she’d come in for facials, taking her limo a block from the Four Seasons. “Opening new stores, introducing new customers to Bluemercury, and just being in the fashion industry in general is a lot of fun,” says Beck. “Talking to customers is the best—showing them products, giving them samples. It’s so much fun, I don’t feel like I’m working.” 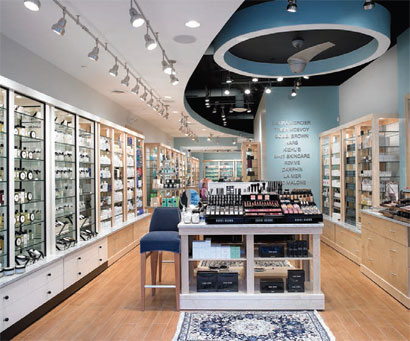 And to think: he got his professional start in janitorial management.

An ILR major, Beck was still an undergrad when he and his brother founded a business providing maintenance services to chain stores. Eventually, he says, they built it into a multi-million-dollar enterprise, but he was miserable. “We were solving people’s problems every day,” he says. “Starbucks; Bed, Bath, and Beyond—these companies were calling saying, ‘Our roof is leaking and our toilets are overflowing and we’re locked out of our store in Alaska.’ But I hated the business.” With an eye toward selling the firm, he met with a group of investment bankers in D.C. “In this meeting there was a girl, and her name was Marla,” he recalls. “And I was smitten.” Then a McKinsey consultant, the woman in question had an economics degree from Berkeley and a Harvard MBA. They married, became business partners—she serving as the management guru, he the self-described “crazy entrepreneur”—and set their sights on launching an online cosmetics company. But it was a bust, partly because it didn’t fit into the traditional supply chain; back then, high-end make-up lines were carried almost exclusively in department stores. Scrambling to fill orders, they wound up buying stock from a little shop on M Street, which carried the Kiehl’s brand of luxury skin-care products—and eventually decided to purchase the store, becoming an early entrant in the “bricks and clicks” model of retailing.

Three months after they christened Bluemercury, though, a Sephora opened two doors down. “They were building tombstones outside this store,” Beck jokes of the threat posed by the popular international chain, known for its casual, “grab and go” outlets where shoppers can test cosmetics from dozens of brands. But the Becks gambled that there was room in the market for their model. “People said, ‘Barry, the problem with you is that you’re not from the industry. You don’t know how things are done,’ ” he recalls. “But in the end, that was a good thing for us.” To illustrate their market niche, he cites the time his mother went shopping for Bobbi Brown cosmetics in a department store, only to be told that the line’s saleswoman was at lunch and no one else could help her. Bluemercury would offer one-stop access to numerous brands, as Sephora does, but with the personalized service and expertise of the traditional make-up counter. “We only hire beauty junkies—people that love the products,” he notes, “and all our employees are full time.”

In 2012, the company became a cosmetics producer as well as a vendor, launching its own skin-care line. The brand, whose ethos is using natural ingredients that have scientifically proven benefits, like Vitamin C, is dubbed M-61. Asked to explain the name—and not for the first time, or maybe the thousandth—he says that it’s after the galaxy. “You could spend your life doing focus groups,” Beck says with a sigh. ” ‘I like it,’ ‘I don’t like it,’ ‘It sounds like a gun.'” The couple faced similar doubters when they dubbed the business Bluemercury, intended to pair Marla Beck’s favorite color with a sense of speed and dynamism. “Early investors hated the name,” Beck recalls. “They asked, ‘What does it mean?’ And I said, ‘Well—what does Starbucks mean?’ “