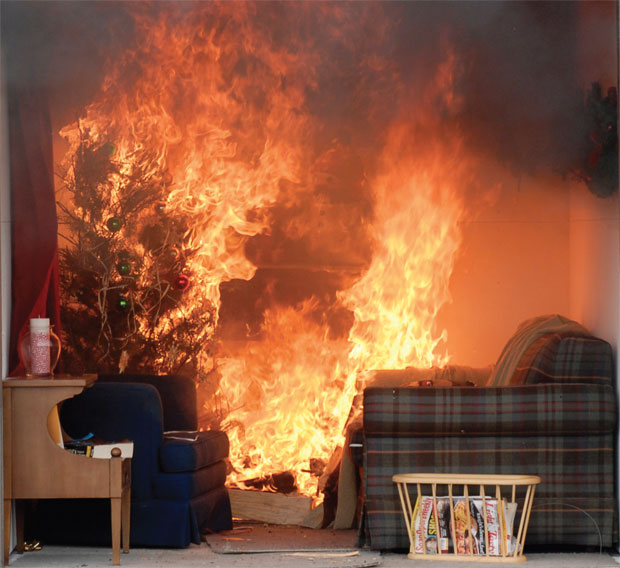 HOLIDAY HAZARDs: Each year, Exponent staffers team up with local firefighters to demonstrate the dangers of a dried-out Christmas tree. (They also educate the public on the explosive potential of a deep-fried turkey.) Photos provided.

When a construction accident near San Francisco International airport jammed the 101 freeway late last summer, it caused a massive backup on one of the Bay Area’s main thoroughfares. An excavator had struck an electrical tower, which collapsed and sent live power lines onto the road, snarling traffic in both directions. The incident frustrated many motorists—but for a select few, it sparked a certain professional curiosity. “When something like that happens, the first thing you think is, Uh-oh, my commute is going to be a nightmare,” says engineering consultant Meredith Kratzer Sellers ’05, chatting over lunch a couple of weeks later. “And then it’s like, Hmm . . . I wonder if that tower is going to show up in back of our building on Monday, with the company asking us to figure out why it crumpled.”

A chemical engineer by training, Sellers is among some two dozen Cornellians—the majority of them PhDs in engineering fields—who work for a California-based firm devoted to failure analysis. Co-founded in 1967 by Bernard Ross ’56, BME ’57 (now retired with the title of chairman emeritus), the company originally went by the name Failure Analysis Associates. Indeed, for its fortieth anniversary, it put out a commemorative book that makes the world seem fraught with peril; the handsome hardcover offers a survey of some of the firm’s projects, from a Turkish Airlines flight that crashed with no survivors to a fuel pipeline breach that sparked a massive fire to a structurally faulty hotel walkway whose collapse cost 114 lives. 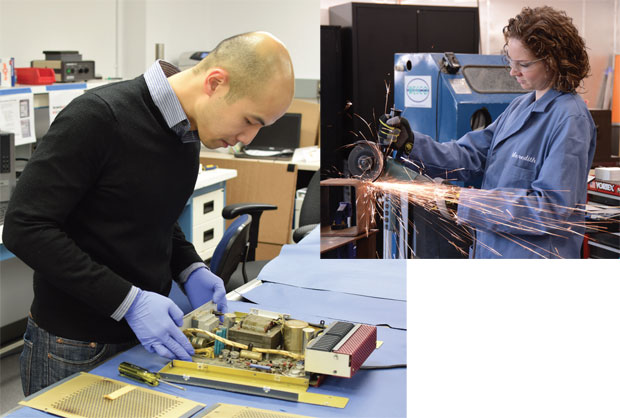 “You can get your hands dirty”: Engineering consultants Ray Huang ’05 (left) and Meredith Sellers ’05 (below) at work in the Exponent testing labs. (Photo provided)

While failure analysis—studying why a mishap occurred in the hope of preventing future ones—still comprises much of the company’s work, in the late Nineties it changed its name (to “Exponent”), in part to reflect a growing segment of its business: conducting analyses that are forward-looking rather than retrospective, with the aim of forestalling failures in the first place. “In recent years, we’ve put a lot of effort into proactive work,” says Ray Huang ’05, an electronics specialist with a PhD from Caltech. “We use our expertise to say, ‘Consider these things when you’re designing your products, so they can be more robust.’ ”

Based in Menlo Park, Exponent has more than 700 consultants—Huang notes it has “one of the highest densities of PhDs of any organization that we know of”—and offices around the globe. Outside its sleek headquarters, visitors are greeted by what appears to be an abstract sculpture made of blue metal—but in fact, it’s the remains of a construction crane that was dramatically twisted and bent in an accident. On the ground floor, a series of labs and workshops house equipment devoted to such fields as fluid mechanics, combustion, electronics, chemical analysis, and microscopy. 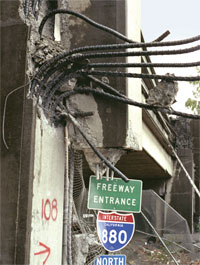 There are gizmos that can pull things apart—or crush them—under tons of pressure, used to test anything from concrete blocks to watch straps. An X-ray machine can show the internal workings of a device—say, a cardiac stent threaded into a porcine heart to study how it might get stuck in a human’s. On one Friday morning in mid-September, Huang and Sellers greet a colleague who’s carving up a car seat; the padding and upholstery will be tested for combustibility as part of his investigation into an automotive fire. “To my knowledge, there isn’t another company that allows people to be exposed to this variety of things,” Huang observes. “We work on projects that are large or small, that are proactive or reactive, that involve litigation or don’t. There’s even some cool ‘C.S.I.’ or ‘Mythbusters’-type stuff. That’s what makes the job so enjoyable: there are a lot of things to get your hands on, and you can get your hands dirty.”

In these halls, a casual tour can involve the phrase, “Speaking of blowing stuff up, this room was made exactly for that purpose.” (This from Huang, as he and Sellers escort a visitor into a lab that includes a chamber built to withstand explosions; among its other noticeable features is a cart laden with a dizzying array of fire extinguishers.) Exponent has been known to install an entire kitchen—replicating the original down to its cabinets, countertop, and appliances—to study how a particular fire spread. To analyze a certain model of clothes washer, testers needed to run the machines day and night for weeks—so the company invited the staff to bring in their dirty laundry and have it cleaned for free.

Exponent employees routinely get e-mails asking if they have a particular item—say, a coffee pot that was on the market five years ago—that a team needs. Sometimes it’s the staffers themselves who are pressed into service, as when Sellers test-drove a pair of four-inch heels for a personal injury case. “They’ll ask for someone of a certain weight, height, and shoe size, so they can study the biomechanics and understand whether a person could have slipped, fallen, or tripped in the way they described,” explains Sellers, who has a PhD in chemical engineering from the University of Illinois, Urbana-Champaign. “So I was videotaped while walking in these specific shoes, and they used that information to model what the individual in question would have experienced.”

While the consultants aren’t at liberty to identify clients by name, they note that when doing proactive projects, they often get enviable sneak peeks at emerging technologies, as much as a year ahead of the general public. As civil engineer Brett Davis, PhD ’14, puts it: “We get to work at the forefront of some of the big companies that are changing the world as we know it.” Edgar Peralta ’07, a recent hire who works under Huang in electrical engineering, says he’s gotten hands-on lessons in such issues as why certain brands cost more: they actually do have better-quality, longer-lasting components. “Before I worked here I thought, I’ll just buy the cheapest cable or adapter,” says Peralta, who has an applied physics PhD from Stanford. “Now I know there’s a reason why one is more expensive than the other.”

We walk a fine line, because what we do is different than what attorneys do. sometimes we have to tell clients news they don’t want to hear.

For work involving litigation, the consultants sometimes conduct their experiments under the watchful eye of lawyers, who supervise the proceedings—say, dictating precisely how a rice cooker should be tipped over to simulate the conditions that allegedly caused a fire. “We walk a fine line, because what we do is different than what attorneys do,” Sellers says. “Sometimes we have to tell clients news they don’t want to hear. We have to be certain that the technical opinions we’re providing are robust, that they’ve been verified and we can defend them.” She and her colleagues also give expert testimony on the witness stand—and occasionally, like something out of “Law & Order,” they get grilled by opposing counsel. Once, Huang recalls, he was queried on his understanding of a particular computer chip—and, to show that he ought to be familiar with it, the lawyer even called up a website proving that Huang had used that model during a project his senior year at Cornell. “You never know what issue from your past experience is going to be brought up,” Huang observes. “In this line of work, even some obsolete technology could come up in a different context.”

The consultants sometimes have to travel on short notice, so they keep their go-bags packed and their passports current. (Each year, Exponent hosts a staff photo contest; categories include “bleakest inspection locale.”) For a job that involved the petroleum industry, Sellers went to Hawaii, Canada, and Africa; one of Huang’s most memorable projects required visiting Alaska—happily, during the summer season of midnight sun—to inspect a power plant whose machinery had shorted out.

Other work puts the consultants face to face with grim realities, such as an assignment for which Sellers researched how many people are crushed by falling furniture each year—and learned, among other things, that most victims of those accidents are children. In a sense, failure analysts are like cops and firemen, whose livelihoods depend on the fact that unfortunate events inevitably occur. “We don’t hope for bad things to happen,” Sellers says. “But if they do, we want to be involved.”