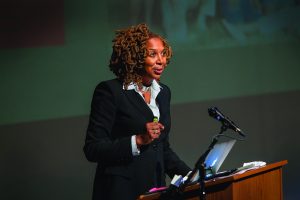 At first glance, it looks like a nonsensical jumble—a word search puzzle emblazoned on a T-shirt. But on closer inspection, those letters form names: Tanisha Anderson, Miriam Carey, Kendra James, and many others. All of them, the shirt declares, are black women who were killed by police.

The design is meant to underscore the fact that—even in the midst of the national conversation around the Black Lives Matter movement—the deaths of African American women at the hands of law enforcement often go unheralded. That inequity is at the heart of an awareness campaign, #SayHerName, spearheaded by legal scholar, university professor, and civil rights activist Kimberlé Williams Crenshaw ’81. “Time and time again, we were noticing these deaths were getting very little attention; few people were lifting up their names,” says Crenshaw, a Harvard Law graduate and co-founder of the nonprofit African American Policy Forum (AAPF) who holds a joint appointment at Columbia and UCLA. “So as we participated in marches and public advocacy, we would always say the names of women along with the men. People were often shocked to fi nd out that, yes, women too are killed by the police.”

For more than three decades, Crenshaw has been exploring the ways in which racism and sexism collide to derail the lives of black women, even coining a term—“intersectionality”—to describe the phenomenon. Last year, she was the lead author on a report, released by the AAPF and Columbia Law School’s Center for Intersectionality and Social Policy Studies (of which she is director), chronicling the many challenges that young women of color face. Entitled “Black Girls Matter: Pushed Out, Overpoliced, and Underprotected,” the document notes, among other unsettling facts, that African American girls are far more likely than whites to face harsh punishment for relatively minor school infractions, in numbers even more disproportionate than their male counterparts.

Crenshaw has worked with civil rights activists in Brazil and India, authored a background paper on racism for the U.N., and helped shape part of the South African Constitution.

Crenshaw and her colleagues published the report—and launched the related #BlackGirlsMatter movement, which is ongoing—partly in response to the Obama Administration’s My Brother’s Keeper initiative, aimed at improving the lives of young men and boys of color. “We applauded the president’s attention to racial inequality among youth, but we were deeply concerned that girls were being left out,” says Crenshaw, who also holds a master of law degree from the University of Wisconsin. “From our research, it was clear that socially marginalized populations, particularly of black and Latino girls, were growing up in some of the same conditions, facing some of the same obstacles, and being disregarded in some of the same ways.” 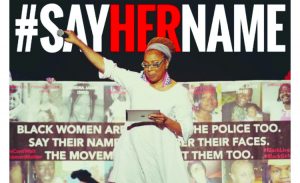 Crenshaw is speaking via Skype from the U.K., where the former double major in government and Africana studies has a three-year appointment as a visiting professor at the London School of Economics. Her work has long been international in scope: she has worked with civil rights activists in Brazil and India, authored a background paper for the U.N.’s World Conference on Racism, and helped shape the equality clause in the South African Constitution. Domestically, her highprofile work has included aiding the legal team representing Anita Hill, the law professor and former clerk who accused Supreme Court Justice Clarence Thomas of sexual harassment at his 1991 confirmation hearings.

In addition to publishing numerous articles in academic journals, Crenshaw has weighed in on racial disparity issues through the mainstream media, including NPR, the New York Times, and Ms. Magazine, which named her its “most inspiring feminist” of 2015. In November, New Press is publishing On Intersectionality, a collection of her writings over the past thirtyplus years. “You’d be surprised how much courage it took for Kimberlé to step out into the breach and help create the architecture of a new narrative and a more complex analysis,” says James Turner, a Cornell professor emeritus of Africana studies and one of Crenshaw’s longtime mentors, who ranks her among his top students during his more than four decades on the Hill. “You would think it wouldn’t require much debate when you say, ‘Girls, too, matter,’ but it certainly has. Many people have said, ‘We understand, but first you have to deal with the condition of boys and men, because it is severe—and only by improving it will you have a trickle-down effect improving the lives of women.’ Kimberlé has been absolutely forceful in criticizing the logic of that argument.”

‘You would think it wouldn’t require much debate when you say, “Girls, too, matter,” ’ says James Turner, Crenshaw’s Cornell mentor. ‘But it certainly has.’ 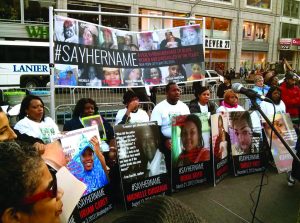 In her current talks for the #SayHerName movement, Crenshaw often starts by asking audience members to stand, then sit when they hear an unfamiliar name. Nearly everyone remains standing through Michael Brown, Eric Garner, Tamir Rice, et al.—but most sit at Michelle Cusseaux, who was shot after allegedly threatening Phoenix police with a hammer, or Natasha McKenna, who died in a Virginia jail after being tased four times while shackled. Crenshaw notes that both died during mental health crises—a fairly common situation among females who perish at the hands of law enforcement. Others have died during domestic violence calls, drug arrests, evictions, or simply because they were in the wrong place at the wrong time. “There isn’t a frame for understanding police killings of women; they seem to be outside the traditional ways in which police killings of black people have either been contested or defended,” Crenshaw observes. “A fixture in the understanding of racism is the idea that black men have long been vulnerable to white men. Many times that was built around a notion of hypermasculinity or hypersexuality; that’s where lynching came from. But where do women fit in? Part of what we’ve been trying to do is broaden the frame of what makes people vulnerable—and what needs to be done to make them safe.”