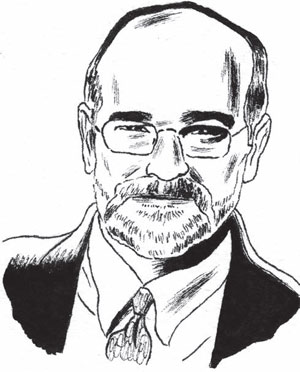 As an undergrad at the University of Texas, Austin, Michael Lynn majored in psychology and economics and worked his way through school as a tuxedoed waiter at an upscale French restaurant. It was apt preparation for what would become his avocation—as one of the world’s foremost experts on tipping. Now a professor of consumer behavior and marketing in the Hotel school, Lynn has published dozens of studies on tipping and regularly appears in the national media, including a June interview on NPR’s Freakonomics Radio. As one of the hosts noted: “Tipping is an idea that economists, traditionally, have a hard time with. Why should I give more of my money to someone else on top of what I’ve already paid for a meal or a ride to the airport?”

Cornell Alumni Magazine: Where did the custom of tipping come from?

Michael Lynn: There’s a retired anthropologist who theorizes that tipping originated as a way to forestall the server’s envy. He thought, if you’re a customer at a tavern, and you’re eating and having fun, the servers are likely to be envious. They could spit in your food; who knows what they might do? So tipping evolved as a way of saying, “Here’s some money; have a drink on me after you get off.” His argument for this is that the word for tip in many countries translates to “drink money” or, in Asian countries, often “tea money.”

CAM: If that’s the anthropologists’ explanation, what do economists say?

ML: They tend to think that tipping exists because it’s an efficient way to monitor and reward employees. If you’re ignoring my table, management doesn’t know if you’re doing a bad job or if I expressed a desire to be left alone. It’s hard for them to evaluate your performance as a server, but it’s easy for me as a customer. So we tip those professions where the customer has an advantage in evaluating performance. Why don’t we tip our doctor? In part, because we can’t tell if he did a good job.

CAM: That may be why the system exists—but why are individuals motivated to tip when they don’t strictly have to?

ML: For a lot of reasons—but the dominant one is to avoid the server’s disapproval. Part of human nature is that we care what people think about us.

CAM: Where does America stand in the tipping hierarchy?

ML: We tip more service providers, and larger amounts, than anywhere else in the world.

CAM: Why is that?

CAM: In addition to working in a fancy French restaurant, you’ve bartended and waited tables at casual joints like Pizza Hut. Did you get good tips?

ML: I didn’t get bad tips, but I didn’t get great tips either. Especially in casual dining, there were other servers who always made more money than me. And now I understand why: because they were more outgoing and sociable. In casual dining, it’s all about the rapport you establish with the table, because then they’ll care more about your opinion of them.

CAM: And how can a server do that?

ML: There are a lot of specific behaviors that we know, through experimental research, increase tips. Introducing yourself by name. Touching the customer lightly on the arm or shoulder. Simply writing “thank you” or drawing something on the back of the check. You’re personalizing yourself, so you’re not this bland food-delivery mechanism.

CAM: Demographically, which servers get the best tips?

ML: Of all the research I’ve done, I got the most flak over that. There were a lot of letters and e-mails to our dean. People even called Cornell, checking if I had IRB [Institutional Review Board] approval. I’ve studied race differences and not gotten those kinds of reactions.

CAM: Speaking of which: can you talk about racial stereotypes in tipping?

ML: Blacks are widely perceived in this country as poor tippers. There was a famous case in 1999—a restaurant in Florida charged a black couple an automatic gratuity and didn’t charge it to a white couple at the next table. They called the manager over, and his response was, “You black people don’t tip.” They called the police, and it became a media sensation. I thought, This is an interesting empirical question. So I studied it—and sure enough, blacks tip less than whites on average.

CAM: And why is that?

ML: It has a little to do with income and education differences. It may, on some occasions, have to do with service differentials—that is, blacks get poorer service and as a result tip less. But the fact is, tips aren’t that strongly related to service in the first place. And after controlling for a customer’s own rating of service, you still get a black-white difference. The strongest explanation I’ve found so far—but it’s only partial—is that there are differences in awareness of the tipping norm. About two-thirds of whites, if asked what is the customary tip in U.S. restaurants, will give you a response in the 15 to 20 percent range, but only about a third of blacks will. So blacks are less familiar with the norm and therefore don’t comply with it as readily.

CAM: Given how fraught the issue is, why study it?

CAM: In your Freakonomics interview, you mention that due to race-based differences in earning power, our tipping system might actually be illegal.

ML: The Civil Rights Act made it unlawful to discriminate in employment on the basis of race. The Supreme Court has ruled that even neutral practices that are not intended to discriminate—like relying on tips as a major source of employees’ income—are unlawful if they adversely impact one of these protected classes.

CAM: Earlier, you mentioned that tipping is not particularly dependent on service. Can that really be true?

ML: I interview customers leaving restaurants, asking them to rate the service and tell me how much their bill was and how much they tipped. I find that only about 4 percent of the tipping differences among dining parties is explained by service quality.

CAM: But how is that possible?

ML: People say, “OK, you didn’t give me the service I wanted; I still don’t want you to think I’m a cheapskate. So I’ll tip you less—just not a whole lot less.”

CAM: What if the service is just dreadful?

ML: I have no doubt that if the service is abysmal people will leave without tipping—but that’s so rare it doesn’t really count.