Ask an avid gardener why she digs in the dirt, and the resulting answer comes in a torrent: fresh air, exercise, the wonder of transforming a lowly seed into food, the pride of having battled pests and the weather, access to the freshest veggies in town. 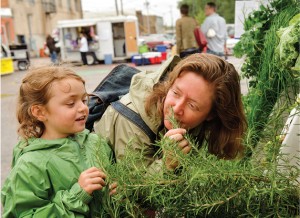 In the activists’ view, then, gardening is far more than a hobby–it’s a critical resource for the 14 percent of Americans who don’t know where their next meal is coming from and the many millions more who can’t afford to put fresh produce on their dinner tables. “Food systems are an excellent path for developing more equitable communities, because everyone eats,” says Christine Porter, PhD ’10, an assistant professor of public health at the University of Wyoming. “There’s still additional value, in every sense of that word, to producing locally.”

And yet, Porter notes, there’s relatively little data in the academic literature about nascent local food systems and the value they produce–financially, nutritionally, or in pursuit of racial and social justice. Using a five-year, $5 million grant from the USDA, Porter and her collaborators are forging a partnership among higher ed researchers and food justice organizations. Dubbed the Food Dignity Project, the effort comprises case studies of its five community partners, each of which aims to promote access to healthy food for socially disenfranchised people. There’s an urban farm in East Brooklyn; a children’s wellbeing nonprofit in Ithaca; a network of integrated food businesses in the San Francisco Bay Area; a health and human services consultancy that serves Wyoming’s Wind River Reservation; and Feeding Laramie Valley, a Wyoming nonprofit that champions an equitable, just, and sustainable food system. The project is documenting how each organization is doing its work and, where possible, quantifying it and/or mounting randomized, controlled trials to test aspects of the groups’ impact. With academics at Cornell, Ithaca College, the University of Wyoming, and the University of California, Davis, the project is documenting how each organization does its work and collecting data to quantify the results.

Already, Food Dignity partners are leveraging the project’s findings to change public policy. Activists in Laramie convinced local officials to set aside space in all city parks to expand access to community gardens using preliminary data from a study Porter designed and conducted with Feeding Laramie Valley. Over the course of three years, thirty-three amateur gardeners weighed every morsel they harvested from their 253-square-foot community plots. Despite Wyoming’s harsh climate, participants grew enough to furnish two adults with their recommended daily allowance of fruits and vegetables for four and a half months–a financially and nutritionally relevant harvest. “Gardeners had a hunch that they were growing a lot of food, and Christine knew we needed data in the academic literature,” says Feeding Laramie Valley founder Gayle Woodsum. With the resulting American Journal of Public Health paper, says Woodsum, the team has demonstrated that “community members have the interest in and ability to take leading roles in designing and utilizing research to address pressing local needs.”

Porter got her start in the local food movement as a grad student in nutrition and adult education, volunteering with an Ithaca group working to combat childhood obesity. At the time, the Peace Corps alumna imagined herself in the nonprofit world after grad school. Then, in 2009, she and a coalition of activists on campus and off won a $1,500 humanitarian award from Cornell. The grant funded Gardens for Humanity, a hub to connect locals with resources in the community and on the Hill to promote enhanced nutrition, environmental conservation, neighborhood safety, and intergenerational relationships through community gardens. Seven years later, the group is still going strong, offering a neighborhood gardening service, programming for youngsters, and low-cost food plants distributed at community events.

The grant also shifted Porter’s career trajectory, as she came to realize she could leverage the strengths of academia to effect social change. “Now as an academic, I listen for what people want to do and I look for ways to support them,” she says. “The Gardens for Humanity grant was the first time I had that idea in theory work in practice.” Her attitude makes Porter an exemplar among researchers, says Food Dignity co-investigator Scott Peters, a professor of development sociology who was on her dissertation committee. He notes that historically, research universities have tended toward a model of public engagement in which communities have problems and scholars heroically introduce the solutions. “The Food Dignity Project was purposely designed to not duplicate that approach,” he says. “What’s important about the project and Christine’s leadership is that they’re more collaborative. She has been bold about taking these issues on, but with a sense of humility that’s crucial for scholars who want to work more respectfully with people who are not academics.”

In Porter’s latest effort–dubbed the Growing Resilience study–she has extended her Food Dignity work with residents of the Wind River Reservation, a community plagued by high rates of obesity and diabetes that has very limited access to fresh produce. Theirs will be the first randomized, controlled trial to evaluate how gardening might combat health disparities. The five-year, $3 million, NIH-funded project will enroll one hundred households, each including members of either the Eastern Shoshone or Northern Arapaho nations. Half of the families, all newcomers to gardening, will receive free vegetable plots this spring; the other fifty–the control group–will receive their gardens once data collection ends. In the meantime, Porter and her team will document the diets and health status of the two groups to explore how gardening influences consumption of fresh fruits and vegetables, exercise, and other variables. “With more community involvement in determining what local food systems look like and who they serve,” she says, “we can generate knowledge that contributes to making the world a better place.”