On a recent Saturday in the trendy and historic Highland Park neigh­borhood of Los Angeles, an un­­assuming pizza-slice-shaped building on a corner lot is home to an eclectic mix of foodie events. At 10 a.m., there’s a cooking class on how to get the most out of a seasonal produce box filled with citrus, kale, avocado, and other ingredients; at 2 p.m., a second class on making veggie-rich desserts; and in the evening, a pop-up dinner party for twenty-eight featuring dishes made with locally sourced seafood. As all this teaching and baking and set-up goes on in the multi-functional space, a baby sleeps soundly in her stroller while her dad, Andrei Pogany ’02, BArch ’03, pitches in here and there.

The architecture alum designed this hybrid work and event space, dubbed Food + Shelter. The rear part of the “pizza slice”–where the crust would be–houses Pogany’s architecture practice, where he designs custom additions and renovations, primarily for residential clients. Adjacent to his office is a commercial-grade kitchen, where his wife tests potential flavors for her vegan sorbet company. The couple also rents out kitchen space to other small business owners and artisans, including a small-batch popsicle maker, a breakfast bun baker, and a cocktail designer.

In the evening and on weekends, the building is used for events focused on food and community”some hosted by Pogany and his wife, others by outside groups. The events, costing between $50 and $95 per person, take place in the common area”located at the building’s pointy front end”and in the flower-filled garden, which boasts an outdoor couch, twinkling lights, and a fire pit. “This space is a very personal take on what we wanted for our businesses and our lives,” says Pogany, whose unconventional design projects include a current assignment to transform a 500-square-foot house into a dream home for a client who’s six-foot-two. “I like to create spaces that house unique people and experiences, and that’s exactly what Food + Shelter does. These are basic needs”but within them, there’s a way to be creative and to bring people together.”

On this Saturday afternoon, the ten attendees in the dessert class make zucchini pineapple bread with a chocolate ganache topping, plus a sweet-tart tomato jam that’s spread on thick slices of rustic bread. Meanwhile, chefs from a catering company prep the evening’s sold-out $75-per-person feast of prawns served with grains, sprouts, and fennel; wild black cod served with chickpeas, shishito peppers, and a Middle Eastern spiced marinade; and, for dessert, a Moroccan honey almond cake served with a date shake. Says Pogany: “This is restaurant-quality food without the stuffiness of the high-end restaurant scene.” 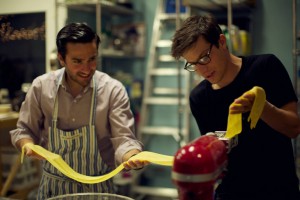 Although Food + Shelter only made its Los Angeles debut in 2014–and is still ramping up and introducing more regular events–it’s a concept that Pogany first became interested in almost a decade ago. Back then, he was living with roommates in a loft in Williamsburg, Brooklyn, where they regularly hosted impromptu dinner parties for dozens of people, with a four-by-twelve-foot piece of plywood laid atop the regular table. “These were special experiences with great food that only happened once–which made them even more special,” Pogany says.

When he and his wife relocated to L.A. in 2012, they sought a commercial space that could house their separate businesses but also serve as a meeting spot for parties and local events. They soon found a building in a great location, but it was abandoned and covered in graffiti; Pogany recalls that the walls were so decayed, he could stick an arm through them. After they bought it in 2013, he redesigned it and managed the demolition and construction, which took just under a year to complete. Today, the space is functional, but also airy and bright–a comfortable setting for client meetings, cooking classes, art openings, dance parties, and more. Among Pogany’s favorite events: the regular pasta-making classes in which attendees, who pay $85 each, are invited to get messy and try new shapes and fillings–wild mushroom, say, or spring onion, spinach, and ricotta. After making the pasta, guests can have a glass of wine and float among the sitting area, patio, and kitchen while the hosts put together a communal dinner. “In a restaurant,” Pogany says, “there’s not that kind of access and flexibility.”

In continuing to build their concept, the couple is working to launch a Sunday supper series, featuring a rotating roster of chefs–what Pogany calls “a comfortable food environment, where everyone brings their own style and cuisine to the mix.” And while Pogany would love to get an authentic Italian wood-fired pizza oven into the kitchen, they currently aren’t allowed in L.A.–so for now, the double-decker convection oven will have to suffice. “The dream is that one day you’ll be able to come in here and get an espresso, a slice of pizza, some sorbet, and maybe a beer or a cocktail,” he says with a laugh. “We’re slowly cultivating all of my favorite things in one spot.”