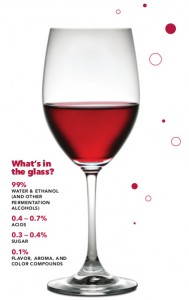 Every year, about 100,000 different wines, representing hundreds of grape varietals from growing regions around the world, are approved for sale in the United States. This dizzying array can provoke populist skepticism in the average drinker: is so-called “Two-Buck Chuck,” they secretly wonder, all that different from a prize-winning Bordeaux?

That’s one of the first questions people ask Gavin Sacks, PhD ’05, an associate professor in CALS’ food science department who specializes in the flavor chemistry of wine. Sacks is quick to offer comfort to the skeptics–noting that even connoisseurs can be fooled by, say, white wine that has been dyed red. But although psychology may be just as important as what’s in the bottle, the notes of vanilla and buttered toast in that glass of chardonnay are not the product of your sommelier’s imagination. The buttery scent, for example, comes from a fermentation byproduct called diacetyl–also found in butter itself–while vanillin, a natural compound derived from the oak barrels in which the wine is aged, also gives vanilla beans their signature aroma. Similarly, floral notes derive from chemicals called monoterpenes, while the peppery flavors found in Syrah grapes come from rotundone, also found in herbs like oregano and basil. “The flavor compounds that make up wine are the same ones that can be found in coffee, leather, cherry juice, even flatulence,” Sacks says, explaining that only a few hundred chemicals make up the building blocks of flavor and aroma. “That may sound surprising–but we also have an alphabet with just twenty-six letters, and yet we still create books.” 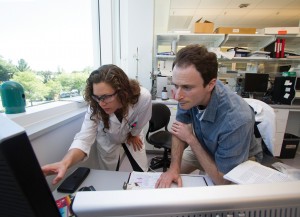 As Sacks notes in a 2013 interview with the public media show “Science Friday”–an appearance that has racked up more than 50,000 hits on YouTube–“99.9 percent of wine is rather boring,” comprising mostly water and ethanol. “Even though we’re only talking about the last .1 percent or so that distinguishes wines,” he says, “that’s a very important .1 percent from the sensory perspective.” He goes on to note that humans can taste compounds down to the level of parts per million–and that much of what we call “taste” really refers to aroma, with the nose detecting compounds at the parts-per-trillion level, equal to a few drops in a swimming pool. “As you swallow, a little puff of air comes back up and it helps direct volatile compounds into your nose,” Sacks explains. “And this is what we call taste: ‘This wine has the taste of apples’ or ‘This apple has the taste of apples.’ “ 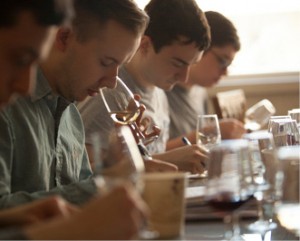 Sacks started thinking of wine scientifically in 2005, when his career took a detour just after he earned his doctorate in chemistry on the Hill. He had arranged a postdoc in Philadelphia, but his wife got a job at the USDA in Geneva, and the couple decided to stay in the Finger Lakes instead. With no other plans, Sacks took a summer job helping out with the harvest at a winery. Although the experience started out as a way “to kill some time,” Sacks says, he came away with a new appreciation for what chemistry meant for the wine industry. “The winemaker I was working for clearly had strong intuition for how to grow grapes and make wine, but in his study he had stacks of technical journals and scientific publications, almost to the ceiling,” Sacks says. “He kept up with the academic literature, because he had a lot of questions.”

Sacks joined the Cornell faculty in 2007. Now, in addition to teaching courses on wine and grape chemistry as part of the interdisciplinary enology and viticulture major, Sacks heads a lab that collaborates with grape breeders and winemakers to develop new varieties and fine-tune cultivation and production methods. One major focus is hybrids based on native varieties. “They’re the kinds of grapes you would see climbing up trees and telephone poles, crossed with classic European varieties,” explains Sacks, who co-authored a textbook on wine chemistry that’s coming out from Wiley in August. “The idea is to bring together the best of both worlds. We want the flavor properties of the European grapes and the disease resistance and cold hardiness of the wild grapes.”

Such hybrids can have their own problems, though, including high acidity–imagine grapes that taste like cranberries–and unacceptable aromas. So Sacks and his students have developed tests that let breeders quickly detect the chemical culprits. “What we try to do is expedite this process of grape breeding, so we can deliver higher quality and more sustainable varieties to growers,” says Sacks. “A lot of it has to do with the practical questions of, how can we create bottles of wine for, say, $8 or $10 that deliver different types of experiences to consumers?” Of course, even the bargain-hunting wine drinker is hoping for a palate-pleasing bottle. So while there’s a place in the vast world of wine for the zippiest Zinfandel and the most serious Merlot, the wine chemist often finds himself working along viticulture’s ragged margins. “Consumers are very tolerant of the types of flavors that they can have in wine,” Sacks says. “But they will not tolerate grapes that smell like moldy peas.”