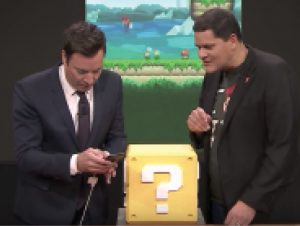 It was December 2016, and the “Tonight Show” host was getting a sneak peek at the newest Nintendo system, the Switch, months before its release—and the video game superfan went gaga over its new “Legend of Zelda.” He was still breathless from having tried his hand at an iOS app version of “Super Mario”: not only had he played it on national television while being coached by the president of Nintendo America, but one of the world’s most beloved game designers—Shigeru Miyamoto, of “Zelda” and “Mario” fame—was scrutinizing his technique from the studio audience.

It was a gaming aficionado’s fondest dream—and it had all been arranged for Fallon by Reggie Fils-Aimé ’83. For the past thirteen years, Fils-Aimé has been the public face of Nintendo America, famous for his whimsical, unabashedly boosterish appearances at tech events and in the media. Dubbed “The Regginator” by fans, Fils-Aimé burst into the public eye in 2004, when he came onstage at the Electronic Entertainment Expo (E3) and declared, “My name is Reggie. I’m about kickin’ ass, I’m about takin’ names, and we’re about makin’ games!” In another E3 appearance that flowered into an Internet meme, Fils-Aimé unveiled the Wii Balance Board by announcing, “My body . . . My body is ready!”

It’s a world away from the career Fils-Aimé thought he’d have when he was studying business in CALS and assuming he’d earn an MBA and work in finance. But a job offer from Procter & Gamble got him into marketing and business management, and he went on to a series of executive positions in some enviably fun industries, from pizza (at Pizza Hut) to beer (Guinness) to Chinese food (the parent company of Panda Express) to TV and music (VH1), and now video games. “Whenever I go back on campus and talk with students,” he notes with a smile, “I say that this is a Cornellian’s best series of experiences.”

His own love of gaming stretches back to high school, when he’d play on a friend’s early Atari. He bought his first system—a Super Nintendo—around 1990 to play with his kids. “After my children would go to bed I’d play a ‘Zelda’ game until two, three, four o’clock in the morning,” he recalls, chatting with CAM during a visit to New York City last spring. “It was pure entertainment. If you had told me then that essentially what I was doing was preparing myself for a role that I’ve now enjoyed for almost fifteen years, I wouldn’t have believed it. But I do think those experiences were foundational. They gave me exposure to our intellectual property and gave me credibility with our fans. If I hadn’t played back then, I’m not sure I would have this job—and I know I wouldn’t be nearly as good at it.”

Fils-Aimé—who was born in New York City to parents who’d immigrated from Haiti, and grew up on Long Island—joined Nintendo America in 2003 as an executive vice president in charge of sales and marketing, becoming president and COO in May 2006. Based outside Seattle, Fils-Aimé is on the road every other week or so, and travels to Nintendo’s headquarters in Kyoto, Japan, four to six times a year. “Being part of a company that has such a passionate fan base is both exhilarating and scary, all at the same time,” he says. “When we do something that our fans love, they let us know—and if they’re disappointed in something, they let us know. As executives, it continually reminds us why we do what we do.”

While Fils-Aimé confesses that he was “scared to death” of public speaking early in his career, he has come to embrace his role as a cult figure in the gaming world. He has been featured in several tongue-in-cheek promotional videos—appearing as an animated game character, as a Muppet (designed by the Jim Henson workshop), and as a cyborg dubbed “Fils-A-Mech.” “It has been absolute fun, and completely unplanned,” he says. “I enjoy it; how can you not? Our business is fun. Our company is fun. We’re all about making people smile.”