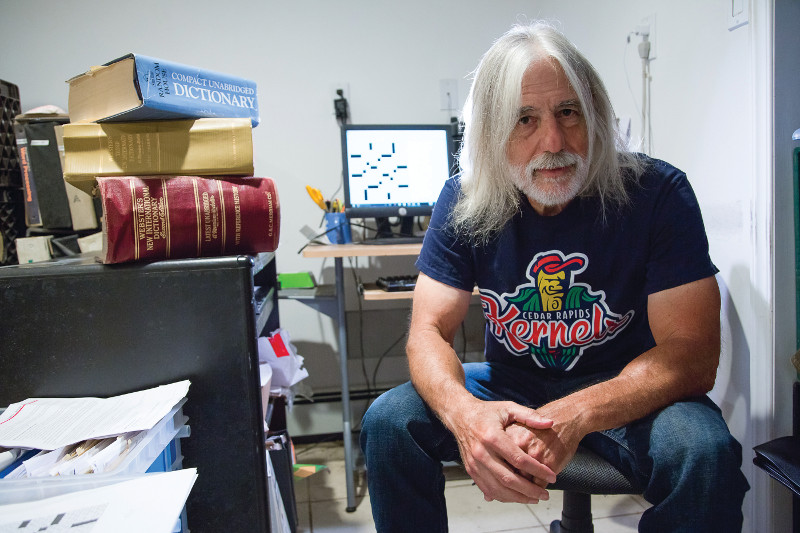 Gym rats have their morning workout; crossword maven Fred Piscop ’70 has his “daily solve.” Every day, the venerable cruciverbalist tackles the daunting puzzle in the Guardian—a notoriously tough, British-style cryptic that even he doesn’t always finish. “I’m stuck on the upper left—8 down,” Piscop says, proffering the mostly completed puzzle in a café on his native Long Island one afternoon last spring. The clue, nonsensical to those untutored in the genre’s peculiar idiom: “Labour’s beast trashed May: ‘An abhorrent leader of idiots’ (11,4).” “I don’t know this term,” says Piscop. “But I know it’s an anagram of ‘May’ and ‘an abhorrent’ and the first letter of ‘idiots.’ ” (The intimidatingly erudite answer: “ERYMANTHIAN BOAR.”)

Yes, Piscop is an éminence grise of American crosswords—literally, given the long white hair and beard that give him the air of an aging rock star. (And indeed, he was once a professional keyboardist and still attends local jam sessions twice a week.) But as a solver, Piscop cheerfully admits, his heart belongs in the U.K. “British crosswords are more interesting and challenging,” he says. “You really have to tear a clue apart to figure out what’s going on. That’s the fun of it for me.”

An industrial engineering major on the Hill, Piscop has been a full-time crossword constructor since 1995, when he was laid off and decided he was done with corporate America. (Of his time working in engineering, he says, “I hated every second of it.”) He has published numerous crossword books as well as a guide to solving cryptics. In addition to creating custom puzzles for private clients, he has long crafted crosswords for Long Island’s Newsday, which ran a profile of him in August 2016 to mark his 1,000th contribution; he also creates a weekly, celebrity-themed puzzle for In Touch magazine. Piscop is currently the crossword editor at USA Today; he has held similar roles at the Washington Post Magazine and Universal Uclick (previously Universal Press Syndicate). He recently inked a deal to contribute puzzles to Crosswords With Friends, an app from the creators of the popular Scrabble-style game Words With Friends.

Piscop is a regular at the New York Times, where he pens “bonus” crosswords—relatively easy ones, pegged to a theme. His July entry, for instance, was a nod to International Tiger Day. (19 Across: “Home of baseball’s Hanshin Tigers”; 32 Down: “ ‘Put a tiger in your tank’ gas brand.”) Since 2013, Piscop has also made the Times’s Split Decisions puzzles, in which the answers are words that differ only in two adjacent letters (like, say, “pinball” and “pitfall”). A longtime friend of Times puzzle editor Will Shortz, Piscop appeared in Wordplay, the 2006 documentary about Shortz and crossword fandom, and helps officiate at the national tournament Shortz runs each year. Shortz also got Piscop a legendary commission: in the late Nineties, Shortz recommended him to comedian and crossword lover Jon Stewart, who aimed to propose to his girlfriend via a custom puzzle. (She solved it—and said yes.)

As both a creator and a solver, Piscop is a bit of a purist. He favors colorful vocabulary and pop culture references, but eschews “crosswordese”—words that appear far more often in puzzles than in real life. And while Piscop constructs puzzles on a computer using special software, his preferred solving format remains old school. “Always paper, always pencil,” he says. “Because there’s an eraser, and I make a lot of mistakes.”

Piscop created the following puzzle especially for CAM readers. (Click here to download and print.)  For another Cornell-themed crossword — one Piscop made for his 45th Reunion — click here.


CAM print readers already found the answers to this puzzle in our Class Notes section. You, too, could be an early bird reader — check out our subscription options!