Abelson at a book signing.Provided

As an investigative reporter on the Boston Globe’s legendary Spotlight team, Jenn Abelson ’00 has covered such topics as how the FAA’s lax regulation of private planes leaves the nation’s skies vulnerable to terrorists and drug dealers. A 2014 series on dangerously shoddy housing for college students was a Pulitzer finalist for public service reporting, and a 2015 piece on surgical double-booking—conducting two operations simultaneously, without the patients’ knowledge—was a finalist for a Scripps Howard Award. “Our job,” she says, “is to hold powerful people and institutions accountable, to expose wrongdoing, to give the disenfranchised a voice.”

For the past couple of years, Abelson has focused on issues relating to sexual misconduct, including an exposé of harassment at ESPN and an investigation into the fashion industry headlined “Beauty and the Ugly Truth.” In May 2016, she collaborated on a yearlong series dubbed “Private Schools, Painful Secrets,” about decades of sexual abuse by faculty and staff at elite New England prep schools. That led to investigations of student-on-student assault—and eventually to her new book, I Have the Right To, which explores one survivor’s experience. Published in March by an imprint of Simon & Schuster and geared for readers aged fourteen and up, the book was co-written with Chessy Prout, who was a fifteen-year-old freshman in 2014 when she was sexually assaulted by a senior at St. Paul’s, a boarding school in Concord, New Hampshire. “There has been so much attention paid to sexual assault on college campuses, but so little to what happens at the K–12 level,” Abelson says. “So many individuals are impacted by sexual misconduct before they even get to college. Trying to address it at college is far too late.” 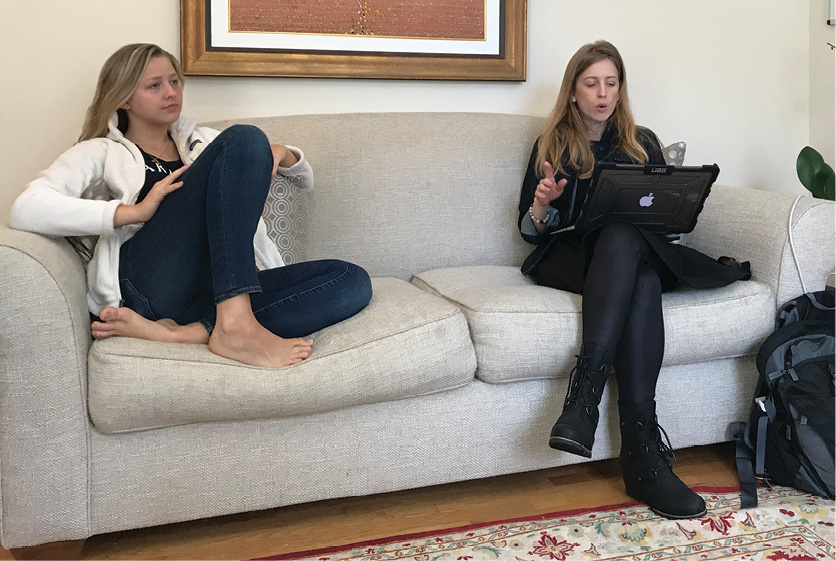 Reporter Jenn Abelson ’00 (right) and co-author Chessy Prout working on their book during Abelson’s leave from the Boston Globe. Provided

Narrated in Prout’s first-person voice, it follows her from an idyllic expatriate childhood in Japan—which was disrupted by the deadly 2011 earthquake that forced the family to return to the U.S.—to matriculation at St. Paul’s, where her father was an alumnus and her sister a senior. Just before graduation her freshman spring, Prout was asked out by an eighteen-year-old named Owen Labrie as part of the so-called “Senior Salute”—an illicit tradition in which senior males pursued underclass girls and kept score according to how far they got with them. As Prout would later tell authorities, although she willingly participated in some intimate activity, Labrie forced intercourse and other sexual acts on her—without her consent and despite her repeatedly saying no. The case ultimately went to trial in summer 2015; although Labrie was acquitted of felony sexual assault, he was convicted of misdemeanor charges including statutory rape and child endangerment, as well as a felony count for using a computer to solicit sex with a minor. He was sentenced to a year in jail, but has been in and out of custody on appeal.

As Prout and Abelson recount in their book—subtitled A High School Survivor’s Story of Sexual Assault, Justice, and Hope—the assault and trial were hardly the only traumas Prout endured. Returning to St. Paul’s her sophomore year, she was ostracized and bullied, and she ultimately transferred to a private high school in Florida. (Her family later filed a lawsuit against St. Paul’s for failing to protect her from the assault; it was settled this winter for an undisclosed sum.) As the legal case proceeded, Prout and her family were horrified to learn that St. Paul’s alumni were actively fundraising for Labrie’s defense—garnering $100,000 to hire the attorney who’d represented notorious Boston mobster James “Whitey” Bulger. “Mom, Dad, and I went ballistic behind the glass doors of our family office, curses flying out of our mouths like sharp knives,” the book recounts. “This was so outrageous, an unfathomable betrayal, the ultimate symbol of rape culture.”

In August 2016, Prout—whose identity had been shielded by the media as the case unfolded—went public, appearing on the “Today” show to advocate for survivors of sexual assault. Abelson took a three-month unpaid leave from the Globe to co-write Prout’s memoir, temporarily relocating to Florida, where Prout (who’ll matriculate at Barnard this fall) was living at the time. “Chessy has such a strong and powerful voice—she pulls no punches,” says Abelson. “As difficult a subject as it was, she made this an incredibly easy project. And as a reporter, I was deeply impressed by her attention to detail and all the documents she’d kept. We’d go through her photos, text messages, e-mails, Facebook, letters people had written her. I was able to read her journals and take excerpts from her own writing. We would talk for hours, and in some cases I’d take transcripts of our conversations and transplant that onto the page. We would write drafts together, and she would weigh in and change things. It was a very collaborative process.”

In a review, Publisher’s Weekly praised I Have the Right To as an “honest and raw memoir” that will give readers “a deep appreciation and admiration for Prout’s resilience as she transitions into a resolute crusader for the empowerment of victims of sexual violence.” In writing it, Abelson says, the co-authors had a dual mission in mind. “One was to help other survivors, to make them feel less alone—but in addition, it was to spread the message of how important consent is, and consent education. Chessy talks a lot about how, as early as kids can communicate, they need to be taught that ‘People should ask whether they can hug you, or you should ask whether you can hug them.’ Things that happen on playgrounds—boys poking girls with pencils or pulling bra straps—it’s not appropriate to write that off as, ‘A boy has a crush on a girl.’ Everyone needs to learn respect for each other and their bodies, and be empowered to say, ‘I have the right to say no.’ ”

A communication major in CALS, Abelson honed her journalism skills on the Hill, covering several beats for the Daily Sun as well as freelancing for the Ithaca Journal. After writing for weeklies on her native Long Island, she moved to Boston and started freelancing for the Globe. She covered suburban town politics and spent eight years as a business reporter before landing the Spotlight gig in 2013. Already highly respected in the industry, the reporting team became a household name in 2015 with the release of the movie Spotlight, which chronicled its coverage of the pedophilia scandal in the Catholic Church. The film was nominated for six Oscars and won two, for best picture and best original screenplay. “There were a number of ways in which we saw the halo effect of the movie,” Abelson observes. “We received an influx of e-mails from people around the world who were seeking help. They’d say, ‘I saw the movie; I believe you’re the only one who can help me,’ and they’d share their story. It was heartening, but also overwhelming. It was clear that many people don’t feel they have trusted news sources—and for us, it underscored the need for more investigative journalism around the world.”