In a college town, the surest mark of a compelling poster is how often it vanishes and has to be re-hung. The ad for the January Science Cabaret —a monthly event intended to make science accessible, fun, and relevant—scored particularly well on that front. Against a neutral background, a tumescent golden baguette thrusts upward; at its base nestles a plump pair of dinner rolls. And then there was the event’s title: Nice Buns: A Dissertation on the Erotics of Bread. “Some people do seem to collect our posters,” says cabaret coordinator Karen Edelstein ’83, BS ’84, MPS ’01, “but this one was exception-ally popular.”

Sex sells. But on the subject of bread, there’s more than a vapid come-on at play, says Stefan Senders, PhD ’99, who founded Wide Awake Bakery a few miles west of Ithaca in 2011. With a following of hundreds who prize his wares—which include a German-style 100 percent rye, a mixed-grain levain, and a French-style country bread featuring all locally grown and milled grains—Senders drew a standing-room-only crowd of home bakers, customers, and science aficionados to a downtown cocktail lounge. “Historically,” says Senders, whose graduate studies in anthropology investigated post-Cold War identity politics in West Germany, “bread has been a manifestation of a very grounded love relationship.” 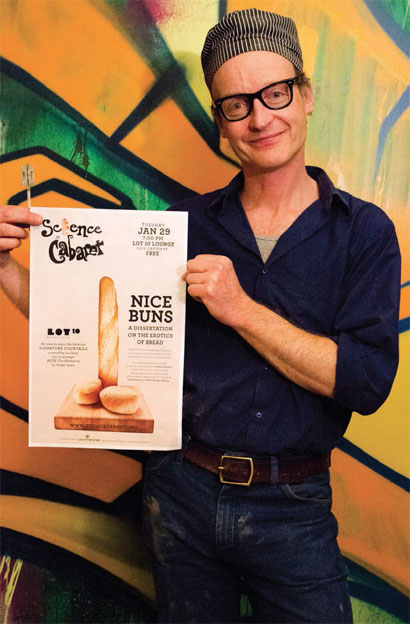 Anthropologist and baker Stefan Senders, PhD ’99, with the much-pilfered event poster from his Science Cabaret.Jay Worley

And so the talk carried listeners on a romp through Senders’s self-described “cheap history” of pre- and post-industrial bread, from the Romans who dubbed the divine personification of the communal oven Fornax (think: fornication) to the modern-day conflation of bread and fertility in the phrase “a bun in the oven.” A collection of sexy bread advertisements—from old-school campaigns featuring the Pillsbury Doughboy to racier contemporary images—projected on a screen served as a backdrop. “We’ve been infantilized through industrial production,” says Senders, who underlined his point with a series of illustrations and photographs of infants and young children, slumbering on snowy mattresses and pillows of machine-sliced loaves.

Questions from the audience delved into the baker’s slow fermentation technique; Wide Awake’s custom-designed, wood-fired oven; and strategies for protecting each grain’s flavor profile in the finished loaf. “I appreciated his history of white bread and the infantalization angle—that’s where the scholar in Stefan came out,” says customer, home baker, and Department of Anthropology chair Nerissa Russell. “But if people were expecting something really lascivious, they might have been disappointed. He was talking about the desire for bread and the sensuous nature of making and eating artisan bread.”

Senders credits the germ of the talk’s substance to a disgruntled customer, exceedingly rare in Wide Awake’s brief history. When the baker asked him whether he’d be renewing his subscription—now marketed as a “crust fund”—for a weekly loaf, the man answered emphatically in the negative. “It’s too good,” he said. “I eat the whole thing on the way home, then my wife gets really mad and I have a stomach ache.” As an anthropologist, Senders learned long ago to listen both to the stories people tell and the emotions simmering beneath the surface. In the wake of that first complaint, Senders started hearing from others similarly afflicted; inhaling a Wide Awake loaf seems to prompt a certain chagrin. “People worried they were being gluttons,” he muses, “and it frightened them.”

Ultimately, he hopes, the passionate lust such customers experience in the presence of a perfect loaf will mellow into a lasting relationship full of love and complexity, imbued with a baker’s care. A vision for rich personal connections among producers and consumers underpins the bakery’s business model, with distribution primarily through partnerships with area farms, where customers can purchase the vegetables, cheese, meat, and cider that turn a loaf of bread into a meal. “It’s a pitch for encountering food more deeply and intensely,” says Senders. “What we do is incredibly intimate—we bake with our hands, our whole bodies. It’s very physical. You take this thing we create, put it in your mouth, and it becomes your cells.”