Since 2000, WVBR has rented space in a building near East Hill Plaza owned by the New York Holstein Association. But later this year, the station will be moving from the so-called “Cow Palace” to a new home in Collegetown. Thanks to a $935,000 capital campaign—a nod to WVBR’s frequency, 93.5 FM—the nonprofit Cornell Media Guild, which owns and operates the station, has purchased a building at 604 East Buffalo Street that will offer more space and closer proximity to campus.

Within a few months of its launch, the campaign had already raised more than $550,000—a good chunk of it from VBR alum Keith Olbermann ’79. Olbermann’s gift—he declines to name the specific amount—secured naming rights to the new facility, which will be called Olbermann-Corneliess Studios in memory of his father, Theodore Olbermann, and longtime friend and VBR colleague Glenn Corneliess ’78, who passed away in 1996. “I’m sure Glenn would’ve objected to the ordering of our names,” says the former MSNBC political commentator and host of “Countdown,” “until I told him that this precludes any chance anybody will ever think there was a guy named ‘Corneliess Olbermann.'” 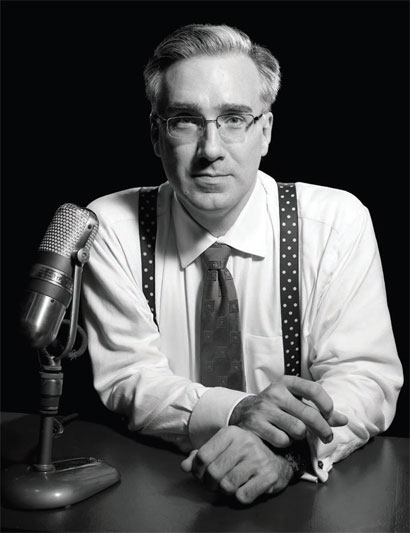 Keith Olbermann ’79 helped rescue WVBR from its decade-long isolation on the hinterlands of East Hill.John Abbott

Returning to Collegetown has been a goal of the Cornell Media Guild ever since the station had to vacate its longtime home on Linden Avenue nearly a decade and a half ago. “We’re far enough away from campus that you have to either drive or take a cab or bus,” laments Drew Endick ’14, the station’s current general manager. As far as Olbermann’s concerned, the current location might as well be in Siberia. “When I was at VBR we once took a very annoying fellow staffer out to dinner at a place in, or just near, East Hill Plaza, and we managed to leave him there,” he recalls. “Not a very gallant thing to do, but it got the point across, because I think it took him an hour to walk back to the studios.”

A couple of years ago, during his first visit to campus since giving the Convocation speech in 1998, Olbermann got a firsthand look at the Cow Palace. “I hadn’t really considered the implications of the new site,” he says. “I went out for a visit and was mortified to realize we were within a hundred yards of where we had ditched the guy at dinner thirty-plus years before.” That day, Olbermann e-mailed his friend Peter Schacknow ’78, a member of the Media Guild board of directors and chair of its alumni relations committee. “I told him we had to get together and get the station back into Collegetown,” says Olbermann, who had given the station $50,000 in memory of Corneliess in 1997.

So far the campaign has drawn some 200 donors, including WBVR alum Jon Rubinstein ’78, MEng ’79, known as “the Podfather” for his role in inventing the iPod. “The idea is to have long-term sustaining financial support from alumni as well as the income the station generates,” Schacknow says. “That’s the model a lot of Cornell student organizations have followed over the years. It’s one we should’ve probably followed sooner, but I’m glad we’re adopting it now.”

Located at the corner of Stewart Avenue and East Buffalo Street—a block from the Chapter House—the 2,500-square-foot facility will have two modern studios for WVBR and its online sibling CornellRadio.com, including upgraded audio and video production suites, more office and work space for staff, a music library, a lounge, and a meeting room. A large multifunction room with a vaulted ceiling and proper acoustics will be used for broadcasting or recording live bands—a far cry from the current setup at the Cow Palace, where musicians cram into the broadcast studio across from the sound board and play through a couple of mics. “I particularly like the idea that the place is being designed for media VBR has yet to get into,” Olbermann notes, “or doesn’t even know it will want to.”

Technological advances aside, Olbermann notes that the station can offer invaluable experience for students no matter their aspirations. “WVBR was just as much a training ground for people who didn’t go into broadcasting,” he says. “It was a professional work environment, without the pressures of making a living. All the dynamics and politics of any office anywhere were present. It’s thirty-four years since I left—and I still have yet to encounter anything in my career that I didn’t experience first at VBR.”