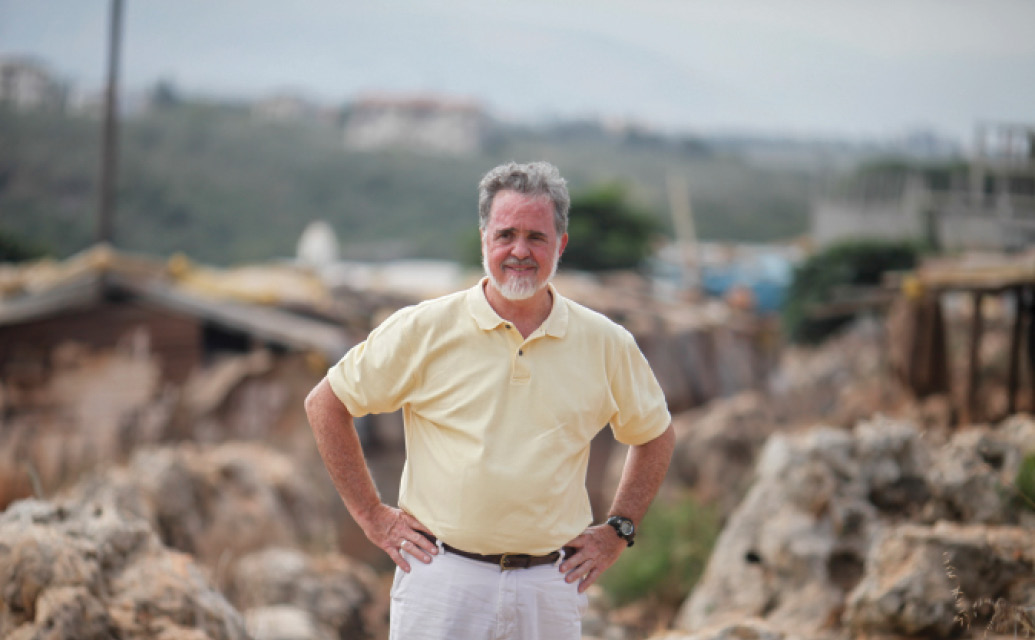 Ray Offenheiser, MS ’76, at a refugee camp in Lebanon 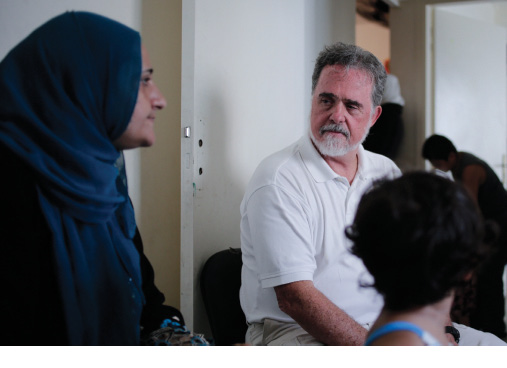 Veteran international development officer Ray Offenheiser, MS ’76, has spent the past two decades as president of Oxfam America, one of seventeen confederated Oxfam organizations worldwide. CAM caught up with Offenheiser in October during his trip to campus to mark the fiftieth anniversary of Cornell’s Committee on U.S./Latin American Relations (CUSLAR) and to visit the Atkinson Center for Sustainable Development, on whose advisory board he sits. Offenheiser also serves as board member or adviser to such heavy-hitters as the World Economic Forum, the Clinton Global Initiative, the Council on Foreign Relations, the Aspen Institute, the World Agricultural Forum, and the Gates Foundation.

In the world of international development, what makes Oxfam distinctive?

We decided to move away from being a service-delivery organization to addressing root causes—to right the wrongs that drive social injustice around the world. We realized that a lot of what had been executed as international development was defin­ing poverty as the absence of public goods, and therefore the project would be providing them. But the problem is

that in most organizations, you never have enough money to realize that at scale in a durable way, so you’re on a treadmill that you can never get off. What was needed was an appreciation for the fact that in many of these countries resources were scarce, institutions were weak, and corruption was rampant. Until you could create a policy environment that was supported by capable, effective institutions within the state and broader civil society, a lot of these good ideas were not going to take.

How does this focus jibe with Oxfam’s original mission?

Oxfam was founded by Quakers and Oxford academics to aid refugees in Greece during the Second World War. It has always been interested in ideas and policy because of its origins in the university world—but speaking truth to power is a Quaker concept, as are internationalist values and humanitarianism. In the case of Oxfam in the U.S., we were founded at Harvard and MIT, and by Unitarians and other church people in Boston, so it’s a lot of the same culture.

How do you challenge power structures while still working within the system?

We decided we wanted to play a somewhat complicated game where we were trying to be insiders and outsiders at the same time. For example, in our current Behind the Brands campaign, we address the fact that a lot of corporations have adopted the rhetoric of sustainable development, but we’re not sure they’ve adopted the practices. We constructed the cam­paign around a report card that challenges corporations on seven issues ranging from labor practices to policies on land and water investments, carbon emissions, treatment of women, and transparency about financing and investments. We said, “We could score you based on your public profile and reports, or we could collaborate with you and score you more fairly.” We approached ten of the world’s largest food and beverage companies, and to our surprise they all said yes. So we’ve pushed them to achieve greater performance, and they’ve been open to that. They realize that in the future these sustainability principles are going to be important to their stock valuation, to the public perception of their brands, and to the success of their businesses.

In 2014, Oxfam’s report on income inequality—particularly the statistic that the world’s richest eighty-five people have as much wealth as the poorest three billion—shook up the World Eco­nomic Forum meeting in Davos. What was the strategy behind that?

We released our report to the international press in Davos the day before the meeting started with the objective of driving the conversation, so the media was asking everybody about their views on the inequality question. It surprised even us the extent to which it became a dominant narrative out of Davos, and then carried over into major media for weeks afterward.

You spend about 60 percent of your work life on the road. Can you give an example of how that firsthand experience informs your understanding of global issues?

I was just in the Masai areas of Tanzania where they’re having more challenges finding water for their cattle. In Sub-Saharan Africa, there are areas where the drought would come every seven years, and now the cycles are closer to three. So climate change is not something that may happen; it’s actually under way in many parts of the world. You can decide this is cyclical or you can decide it’s real—but even if it’s cyclical, it can be a long cycle. It’s an existential crisis.

How is Oxfam America working to influence official U.S. policy?

Offenheiser at a camp in Jordan (Photo provided)

We’ve invested heavily in trying to ensure that we can deliver the U.S. government on important issues, so we have an office in Washington with seventy-five people that just do public policy work. We’ve built research capability and a strong presence on Capital Hill and with the administrative agencies, and we’ve created a lobbying body. We also needed the ability to deliver a segment of the American public to the conversation; the envir­onmental movement had done that thirty years ago, but the development community hadn’t done it at all. So we built a nat­ional constituency of supporters of our work all over the U.S. at the congressional district level, because you need to convince Congresspeople that people in their districts are interested in the issues you’re working on. We had to become much more political, much more policy based, and very sophisticated about the Washington scene.

The Crisis in Syria

What has been Oxfam’s role in humanitarian response to the Syrian conflict?

We’ve been on the ground there since the early days, and we are in Lebanon in the large refugee camps, where we largely manage the water and sanitation infrastructure. We’ve been involved with a large number of refugees in Jordan and Lebanon, most of whom are not living in camps; they’re in makeshift housing, in tents in olive groves, in chicken coops, on the roofs of apartment buildings in plywood shelters. And then in Syria itself, we’re one of only three international not-for-profits in Damascus. We made a decision to be there in part because we saw the national capacity to deliver water and sanitation services to the population collapsing, and we were worried about massive cholera outbreaks.

What’s your take on the forces driving the refugee crisis?

Syria is largely a middle-class country. The people I’ve met with there owned shops, were doctors, engineers, teachers—by and large, well-educated, middle class professionals. Imagine you go from being well off economically to living in a plywood crate in a refugee camp in northern Jordan, and trying to figure out when and if you can go home. And meanwhile you’re using whatever cash you have to keep yourself alive. Families with fourteen people have been living in a single room in southern Beirut, spending down their cash, selling their jewelry; their children are working in the streets as shoeshine boys or on a construction site. And at some point they’re going to have to make a decision about their future: are they waiting around to go back to Syria or give up on it? And what we’re seeing now is this mass population that is down to their last bit of cash deciding the only future they may have is to bet on getting themselves to Europe and hoping for the best.

What about the longer-term picture in the region?

The situation has gotten extraordinarily complicated. The northern part of Syria is being contested by three or four different Islamic groups, and U.S. efforts to support a reasonable opposition have deteriorated. International relief organizations have evacuated because it’s not safe for their staff. And then there’s a larger challenge of ISIS’s growing popularity among Islamic youth around the world, its aggressive recruiting, and its barbaric practices on the ground—and it doesn’t seem to be going away.

So could the refugee crisis only get worse?

I worry that we’re going to see a sustained instability for a decade or two—in which case the migration problem that Europe is seeing now is only the tip of the iceberg. In Washington, there are discussions about intervention versus containment; the foreign policy establishment doesn’t have a clear view on how it’s going to find its way through this. So as a humanitarian organization, we’re seeing a complicated picture where only a fraction of what the U.N. agencies need is being delivered by the donor countries. And if we’re looking at a longer trajectory—combined with expanded conflicts in Yemen and Sudan—the whole global humanitarian system is being stretched almost to the breaking point.