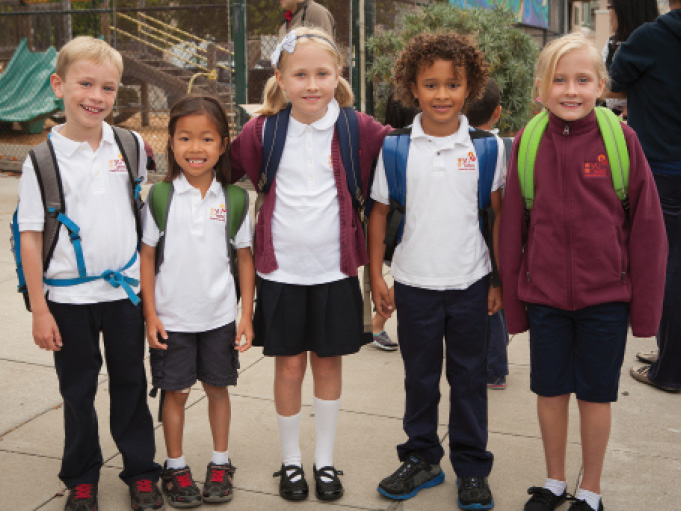 Students at Oakland’s Yu Ming Charter School. Half who enroll already know Mandarin and half weren’t previously exposed to the language (photo provided)

In a bustling public school on a quiet street in the Bay Area city of Oakland, California, the entrance hall is decor­ated with paper-plate pandas and colorful dragons on popsicle sticks. From each classroom come the sounds of eager young learners: one group of kids is giving book reports, another is doing dictation, and a third is identifying words their teacher writes on the blackboard.

The remarkable thing is that all of it—every syllable—is in Mandarin Chinese.

It’s an early fall morning at the Yu Ming Charter School, a public elementary school co-founded by five Cornellians. Opened in 2011, Yu Ming—the name roughly translates as “Together for the future”—serves some 300 students in kin­der­garten through fifth grade. It’s mainly housed in a former parochial school that Yu Ming has already outgrown: two of its grades are located in another facility across the street, and a further expansion is in the works as it continues to add grade levels. “They say it takes a village to raise a child—but it also takes a village to raise a charter school, and we had that,” says Gloria Lee ’92, one of a core group of founders who worked with dozens of volunteers to navigate the myriad logistical and regulatory hurdles to get the school off the ground. “There are times when it hits me and I think, Wow, there are 300 kids who are getting a unique, high-quality education that they wouldn’t have, if we hadn’t done what we did. It’s incredibly rewarding.”

In most parts of the world it’s normal for kids to grow up speaking multiple languages, and it’s a shame that’s not the case in the United States.

Yu Ming was the first of its kind in California: a Mandarin school based on what’s known as the “dual immersion” model. By design, half of each incoming kindergarten class is made up of native speakers—while the other half, as co-founder Wynee Yang Sade ’94 puts it, “don’t speak a lick of Chinese.” Teachers hail from China, Taiwan, and Singapore; in the youngest grades 90 percent of coursework is conducted in Mandarin and 10 percent in English, with the split shifting to 70 percent Chinese by the fifth grade. “In most parts of the world it’s normal for kids to grow up speaking multiple languages, and it’s a shame that’s not the case in the United States,” Lee observes. “In the long run, I think it puts us at a disadvantage as a country.”

The classes are taught by native speakers

While a significant number of Yu Ming’s students are of Chinese extraction, the student body is racially and ethnically diverse. In part to level the playing field in terms of socioeconomic background, students wear uniforms: a white polo shirt, maroon sweater, and navy blue bottoms. The academic year comprises 190 days of instruction—ten more than a typical California public school—to reduce language falloff over the summer. Each year the school gets more than 200 applications for about fifty seats, with students chosen by lottery. “Some families just want to give their kids a leg up,” says Sade, whose husband, Matthew Sade, MBA ’97, is also a co-founder. “So many studies show the benefits for math, science, and other subjects when you have a second language under your belt. Others want their kid to have a connection with their cultural roots, maybe with grandparents who may not be in this country.”

The Sades have a fifth grader and a third grader enrolled, with a third child set to start kindergarten next year. Yu Ming will add a sixth grade class in fall 2016, incorporating an additional grade annually until the school goes up to eighth. “My husband and I are not really fluent in anything, but we’ve traveled and wished we were,” says Christine Schwinn ’89, who is married to fellow co-founder David Cherry ’89, MD ’93. “So one reason we did this was because of our commitment to bilingualism in general, but also because of the economic power of China in the future. We’d love to have our kids fluent in multiple languages, but starting early with Mandarin seemed to provide the most benefits, because it’s harder to pick up later.”

According to the State Department’s Foreign Service Institute, Mandarin is among the most difficult languages for native English speakers to master, requir­ing some 2,200 hours of class time—on par with Arabic, Japanese, and Korean. (Romance languages like French or Spanish are ranked as easy, with tongues like Russian, Hindi, and Polish rated as medium.) “It’s difficult coming from a Roman-letter-based language, and you’ve got to master the tones,” says Lee. “So immersion truly is the best way. You’ve got to start early. Children just naturally pick it up in their spongelike way.” Both Sade and Lee are the American-born daughters of Taiwanese parents; both were forced to take Chinese language classes on the weekends as kids—and hated it. “I will just say for the record that my mom was right,” says Lee. “I should have studied more in Chinese school. I do feel like it’s a disadvantage that I don’t speak it. I think about the opportunities I could have had if I were fluent.” Lee says that her kids, a third and a fifth grader, can already talk circles around her and her husband, who doesn’t speak Mandarin either. “They can totally talk about us behind our backs—and do regularly,” she says with a laugh. “And it’s just going to get worse as they get older.”

Lee recalls that the ultimate bene­diction for Yu Ming came during a recent reunion of her mother’s large extended family, when her mom’s eldest sister—the matriarch of the clan—put her kids’ language skills to the test. “She basically interrogated them in Chinese,” Lee says. “And they must have done great, because afterward she pulled me aside and said, ‘You did a really good thing by starting that school.’ Coming from my auntie, that was a really big deal.”