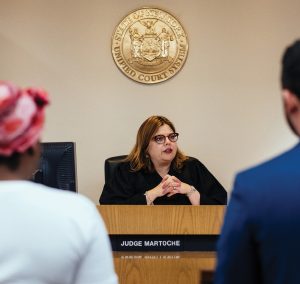 The courtroom is packed—with defendants, family members, attorneys, uniformed officers, journalists, and others. It’s a Wednesday morning in late July, and Buffalo City Court Judge Amy Martoche ’92 is presiding, berobed and seated before the flags of the U.S. and New York State. Case after case, hour after hour, defendants come before her. Some, escorted by officers and entering through a side door, are shackled at the wrists and ankles and clad in the bright orange garb of jail inmates, shuffling in laceless shoes. Others hurry from their seats in the gallery to stand before her bench, as Martoche renders decisions or rules on procedural issues in a wide variety of cases.

There’s a man who was cited for failing to have an air horn on his boat; he proffers a receipt from Walmart showing he’s since purchased one, and Martoche dismisses the charge. Another man has allegedly violated an order of protection, while another is facing multiple vehicular infractions. “Do not drive,” the judge tells him. “If I catch you driving, I will put bail on you. Do you understand?” Yet another is being held on $50,000 bail for the criminal possession of a weapon found during a traffic stop; Martoche finds reasonable cause to send his case to the grand jury.

One large group of defendants—which includes a former Cornell professor now at Ithaca College—clusters in front of the bench: the eight (plus a ninth who’s not in court) were arrested during a headline-making protest in which they blocked traffic in downtown Buffalo to decry Immigration and Customs Enforcement’s holding of refugees in detention camps. Martoche agrees with the defense that the charge of unlawful assembly should be dismissed, as the protestors’ actions didn’t constitute the “tumultuous and violent conduct” that the statute requires; the other charge, of disorderly conduct, will be dismissed in thirty days if the defendants stay out of trouble.

That case is the most high profile of the morning by far, and once it’s concluded the reporters all depart. But it’s a half-dozen other cases—interspersed with the rest throughout the morning, and all involving young female defendants—that distinguish Martoche’s work from that of most judges around the country.

In addition to her other many duties as an elected city judge, Martoche presides over the Buffalo area’s Human Trafficking Intervention Court (HTIC). The first of its kind outside Metro New York City, the court deals with the cases of people facing criminal charges in Buffalo and surrounding counties who have been victims of sex trafficking. It puts those defendants, many of whom struggle with drug addiction, in touch with needed services including substance abuse and mental health treatment, trauma counseling, and help accessing housing, employment, and education. The defendants come before Martoche for frequent check-ins, sometimes even weekly; those who avoid further criminal activity and take positive steps such as getting a job or earning a GED can have their charges—which may range from prostitution to drug possession to theft—reduced or dismissed, or have past convictions vacated.

While the stereotypical view of human trafficking involves a foreign-born woman or girl smuggled into the U.S., held in captivity, and forced to do sex work or domestic labor, Martoche’s court generally deals with a much different situation: local women driven into prostitution, either by someone else or by their own addiction. “People have this idea that you have to be brought from a different country to be trafficked, but that’s a very narrow definition,” says Martoche, talking with CAM over lunch after her morning on the bench. “Whenever someone is being exploited—either through force, fraud, or coercion—to engage in commercial sex work, that’s trafficking. We’ve seen some awful things, like a mother prostituting her daughter to pay off a drug debt; or a boyfriend prostituting his girlfriend to support his drug habit; or someone pretending to be interested in someone romantically, and it’s all a ruse to get that person under their control.”

Since its founding in 2013, Buffalo’s HTIC has worked with some 300 defendants; the vast majority are cisgender women, with a small number of men and transwomen. Martoche and her staff have developed a screening tool to identify potential participants, who are often picked up on charges unrelated to prostitution, such as larceny or drug possession, and don’t see themselves as being exploited. “Nobody says, ‘I’m being trafficked,’ ” Martoche points out. “But they might say, ‘I live with five other women.’ ‘What are their names?’ ‘I don’t know.’ ‘Do you work?’ ‘Yes, I work.’ ‘How much money do you make?’ ‘I don’t know—I don’t keep my money.’ There are all these questions, the answers to which would shock you.” The program’s recidivism rate, about 50 percent, is significantly lower than that typically seen in prostitution cases, Martoche says. “We’ve had some great success stories,” she says. “It’s wonderful that we get to connect them with resources, but the credit really goes to the people who show the strength and resiliency to do what they need to do to overcome their circumstances.”

Among those successes is Stacy, a woman in her mid-twenties who first came before Martoche’s court several years ago; her current and previous charges (in Buffalo and other jurisdictions) included petty larceny, prostitution, and possession of a controlled substance. “I was in my oranges from jail,” Stacy (who asked that her real name be withheld to protect her privacy) recalls of first meeting the judge. “I looked like a complete train wreck.” Stacy was a young teen when her mother died after a long battle with cancer; while she managed to graduate from high school, her family life unraveled, and she started using heroin after a boyfriend introduced her to it. She wound up addicted and living with a drug dealer who, she says, forced her into prostitution. “He kept saying I owed him money, when in reality I didn’t,” she says. “He would make up these insane amounts, which I guess is a thing of human trafficking.” Another woman in the house showed Stacy how to book clients through Backpage.com, the notorious online marketplace for sex work that has since been shut down by the Department of Justice. “As soon as the date would leave,” she says, “[the dealer] would expect me to give him all the money.”

After Stacy’s most recent arrest, her case was referred to HTIC, and the court’s resource coordinator—Alicia Tabliago, who works closely with Martoche—visited her in jail and helped her get into residential drug treatment, where she stayed for a month and a half. “I didn’t think I was a victim of human trafficking at all,” Stacy says. “Alicia explained to me, ‘You definitely were.’ ” She went on to testify against the dealer who’d trafficked her; he’s currently serving a nineteen-year sentence in state prison. Now sober for more than two years, she holds down jobs at two restaurants and is aiming to apply to college. “The court helped me a lot,” she says. “In the end, Alicia and Judge Martoche became like friends to me—very close friends who wanted to see me succeed. They gave me a lot of resources to help me along my journey.” 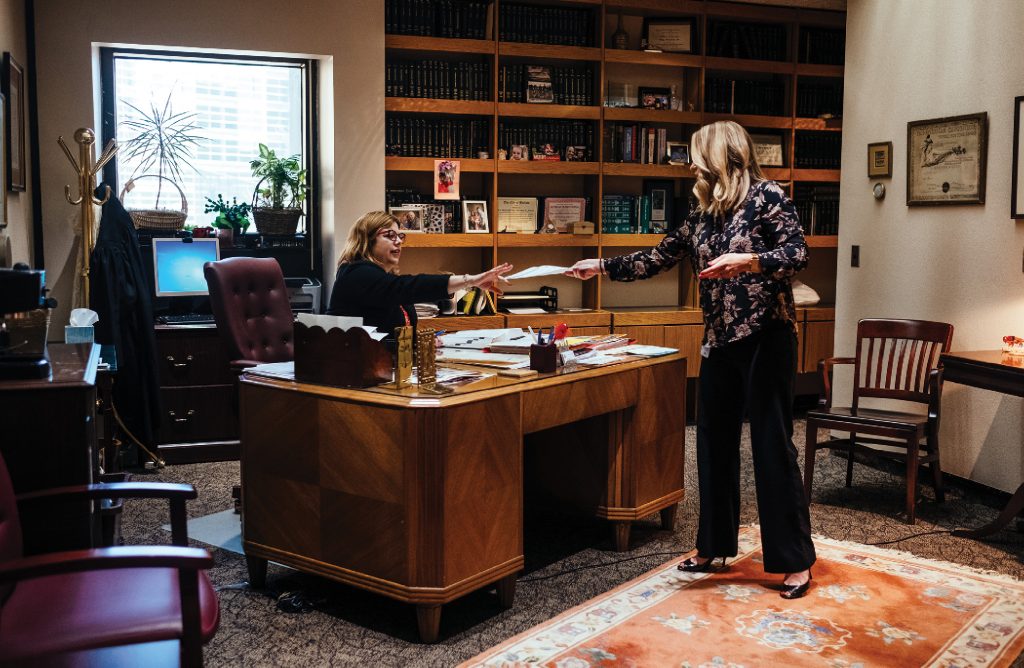 Martoche, a Buffalo native and the daughter of two attorneys, was an ILR student on the Hill, where she helped put herself through school by working more than thirty hours per week waiting tables at the Statler Hotel. After graduation, she joined Teach For America and taught third and fourth graders in an under-resourced region of South Louisiana, an experience that left a strong impression and instilled a passion for social justice. “The lack of equal access to quality education was alarming,” says Martoche. “The difference between the education that was being offered to the children I saw versus my own education—there was a fundamental unfairness that has shaped how I think about things. Every defendant who I see in my courtroom, I ask myself, What kind of educational opportunities were provided to that person? And 95 percent of the time, the people before me did not have access to quality education.”

After earning her JD from the University at Buffalo, Martoche clerked for a federal judge and worked at a boutique trial firm, handling both civil and criminal cases. She was appointed to the bench in 2012 to fill the vacancy of a judge who’d moved to a higher court, then won election to a ten-year term. “To me, it’s important that no matter what someone is charged with, my courtroom is a place where everyone is respected—defendants, lawyers, witnesses who come to testify,” says Martoche, whose chambers are decorated with her framed Cornell diploma and a figurine of Supreme Court Justice Ruth Bader Ginsburg ’54. “Doing the specialty [HTIC] court has been an incredible opportunity. It’s terrific to see when people are clean and sober and doing what they’re supposed to be doing; it’s a thrill, really. Some of those same people have struggled, and what I try to let them know is, ‘Come back to court; we’ll get you back on the path.’ I never want people to be fearful. Certainly, there are times in court when I have to be the tough guy. But in the specialty court, I usually don’t have to—I just kind of push.”

On that busy morning in July, of the half-dozen HTIC participants that come before Martoche to update her on their progress, some are demonstrably faring better than others. One—a young woman with stringy blonde hair who’s clad in denim shorts, a baggy hoodie, and flip-flops—flouts the prominent signage against cell phones in the courtroom, and an officer politely instructs her to put it in her pocket. It soon emerges that she has missed an appointment with a counseling agency. “As much as I give people indulgences,” Martoche laments, “she always has an excuse.”

But then a woman in a floral dress comes before the judge, who notes that Tabliago has reported she’s doing well; Martoche congratulates her, and the defendant wishes the judge a great day. The next HTIC case—a woman sporting dark blue medical scrubs and a lanyard with her employee ID—tells the judge that she’s working hard. “How’s your job going?” Martoche asks. “Beautiful,” the woman responds, and the judge tells her to come back in two weeks. Another young woman, wearing denim capris with an aqua hoodie and cheery pink sneakers, comes before Martoche a while later, and is lauded for joining a therapy group at a behavioral health center.

“Working on staying there,” the woman answers.

Replies the judge: “Keep it up.”