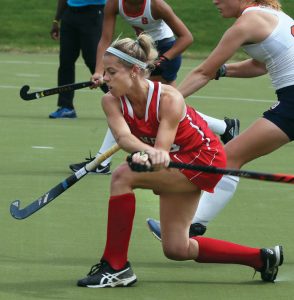 FIELD HOCKEY The Big Red got the 2019 season off to a quick start, scoring just five minutes into its opener against 18th-ranked Syracuse en route to a 2-1 victory—and its first win over the Orange since 2007. Claire Jones ’22 (right) was named the Ivy League Offensive Player of the Week for scoring Cornell’s first goal and collecting two the next day in a 3-2 win over Lock Haven, including the overtime game-winner. She’s the first Big Red field hockey player since Kelly Johnson ’18 in 2017 to be so honored.

MEN’S GOLF Led by top-ten finishes from Charlie Dubiel ’21 and Jack Casler ’20, the Big Red won the Alex Lagowitz Memorial Invitational at Colgate in September, topping the 16-team field with a total score of 800. It’s the first time Cornell has won a full-field tournament outside Ithaca since 2008.

WOMEN’S SOCCER The Big Red opened the season with four wins, including three shutouts—its best start since 2005, when the team won its first six. Ashley Durik ’23 scored twice in a 3-1 win over Iona to start the season before Cornell reeled off 1-0 wins over Siena, Bucknell, and St. Bonaventure on goals from Naomi Jaffe ’21, Jadyn Matthews ’22, and Kaili Gregory ’20. Three goalkeepers shared time in the three shutouts, with Nicole Shulman ’23 stopping six of the seven shots she faced. 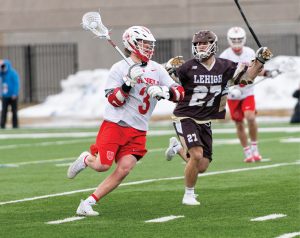 MEN’S LACROSSE Jonathan Donville ’21 (right) was named MVP of Canada’s Junior A Lacrosse National Championship after leading the Orangeville Northmen to their seventh Minto Cup title in August. Donville collected 19 goals and 20 assists while Orangeville went 6-0 in the series. Donville joins Dan Lintner ’14, BS ’15, in 2013 and Joe Nieuwendyk ’88 in 1984 as the only Cornellians to win the cup’s MVP award.

MEN’S SOCCER Will Citron ’23 made his first collegiate goal a memorable one, scoring an overtime game-winner to give the Big Red a 2-1 victory over 16th-ranked Michigan State. Harry Fuller ’21 gave Cornell a 1-0 lead with a goal early in the second half before the Spartans tied the score with 30 minutes to play. Ryan Shellow ’20 recorded three saves.

MEN’S LACROSSE Paul Schimoler ’89 has been inducted into the National Lacrosse Hall of Fame. Schimoler, who died of cancer in 2013, was one of just four Big Red players to earn All-American honors in four seasons. He was the Ivy League Rookie of the Year in 1986 and Player of the Year in 1989, leaving with school records for saves in a game (34), season (241), and career (787). In other news, the newly formed Premier Lacrosse League has named two of its top awards after Big Red alumni. The Attackman of the Year Award honors Eamon McEneaney ’77, a three-time All-American who helped Cornell to national titles in 1976 and 1977; he perished in the World Trade Center on September 11, 2001. The league’s best short-stick defensive midfielder will receive the George Boiardi ’04 Hard Hat Award, named for a four-year starter for the Big Red who died after being struck in the chest with a ball during a 2004 game.

FOOTBALL Two former Big Red players are competing professionally this season. JC Tretter ’13 is in his seventh NFL season and third with the Cleveland Browns. He was the team’s starting center in the season opener after taking every snap there in 2018. He previously spent four seasons with the Green Bay Packers. Luke Tasker ’13 is in his seventh season as wide receiver for the Hamilton Tiger-Cats in the Canadian Football League. A four-time Eastern Division All-Star, he moved into the third spot on the Tiger-Cats’ all-time receptions list early in the 2019 season.

WRESTLING After finishing his Cornell career as an All-American, Ben Honis ’19 is trying his hand at another sport as a member of the Syracuse University football team. A grad student in public affairs, Honis last played football as a linebacker for Fayetteville-Manlius (NY) High School in 2014.

ROWING Three former Cornell rowers competed for the US at the 2019 World Rowing Championships in Austria and helped their boats earn spots in the 2020 Olympics. Tracy Eisser ’12 was part of the women’s pair that finished fourth; Alex Karwoski ’12 rowed with the men’s eight that finished fifth; and Kate Roach ’15 was part of the quadruple sculls crew that won the “B” final to finish seventh. The top eight boats in each event earned spots for the Tokyo Olympics, although the rowers selected to compete will be announced closer to the Games. Eisser and Karwoski both rowed at the 2016 Games in Rio de Janeiro while Roach is looking for her first Olympics appearance.