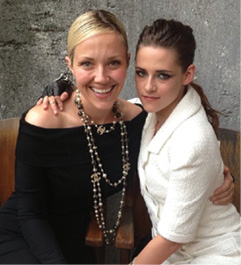 On a Tuesday in mid-August, movie star Kristen Stewart was in New York City promoting her latest project, an action-comedy called American Ultra. She was a guest on “LIVE with Kelly and Michael” in the morning, appeared on “The Tonight Show Starring Jimmy Fallon” at night, and flew back to Los Angeles at the end of the day. Her near-constant companion throughout that media whirlwind: Tara Swennen ’01, her stylist for more than a decade.

Thirty-six-year-old Swennen has made a name for herself dressing an A-list roster of clients in her signature style, creating looks that are classic and elegant, but with a creative twist. In addition to Stewart—best known as Bella Swan from the Twilight movies—they include “Modern Family” star Julie Bowen, Kaley Cuoco of “The Big Bang Theory,” and Emily Ratajkowski of Gone Girl and the “Blurred Lines” music video. “It’s been lovely working with Kristen through her younger, teenage years and watching her blossom into a woman,” says Swennen, who notes that Stewart is now the face of high-profile fashion brands Balenciaga and Chanel. “I’ve been able to have a lot of influence on her look, and we’ve done a lot of fun things together. It’s a true collaboration.”

The Los Angeles-based stylist has wanted to work in fashion for as long as she can remember; her Cornell application materials even included sketches she’d done when she was just seven years old. (As she recalls: “I wanted them to know that I meant business.”) As a textiles and apparel major in the College of Human Ecology, she designed everything from kids’ clothes to hockey jerseys. But after graduation, she says, “I realized that I could create a look much faster without having to manufacture it,” so she went to work for two high-profile stylists: first Andrea Lieberman, notable for outfitting Jennifer Lopez for the 2000 Grammy Awards in a now-iconic green Versace gown with a dramatically plunging neckline; and then Rachel Zoe, the Bravo reality show star whom Swennen describes as “the queen of the red carpet scene.” Swennen struck off on her own in 2006—and she notes that although the job has its share of glamour, it also requires hard work and hustle. “Styling involves everything from perfecting your taste level to keeping up with trends, building and maintaining relationships with clients and designers, networking like crazy, and all sorts of organizational stuff that comes with owning your own business,” she says. “Essentially, I’m always working or on call.”

For the New York outing, Swennen outfitted Stewart in a simple Thierry Mugler sheath on “LIVE” and a black Diane von Furstenberg romper on “Fallon.” But she added her trademark visual appeal with unexpected color combinations—like the dress’s mint and coral fabric—and edgy accessories such as the choker and strappy heels she paired with the romper. Thanks in part to this unique aesthetic, Swennen has garnered more than 17,000 followers on Instagram and was named one of the Hollywood Reporter’s top twenty-five stylists of 2015. “Every woman has certain things that she wants to project and certain insecurities that she wants to cover up—and clothes are a great way to do that,” says Swennen. “I really believe that your personality shows through your wardrobe. My job is to help everyone present their own voice through what they wear.”

Tailoring is key “So many women don’t understand their body and what looks best on them,” Swennen says, so they just buy what’s cute on the hanger. Her biggest piece of advice is to have clothes altered to suit your figure.

Be comfy  Make sure that you wear things that you feel comfortable in—because it shows. “Whether you’re going to the grocery store or walking the red carpet, you don’t want your outfit to wear you,” Swennen says. “Always wear what you love and what you feel fabulous in.”

Classics endure “I would never tell anyone to fill up their closet with trendy pieces,” Swennen says. Instead, women should stick to the classics and incorporate inexpensive fast-fashion items as accents. “Have fun with them, but don’t spend the bulk of your clothing allowance on them.”

Easy on the accessories When it comes to accessories, Swennen says she’s a “less is more kind of gal.” As the saying goes: take a look at yourself in the mirror before heading out the door—and then remove one piece of jewelry.