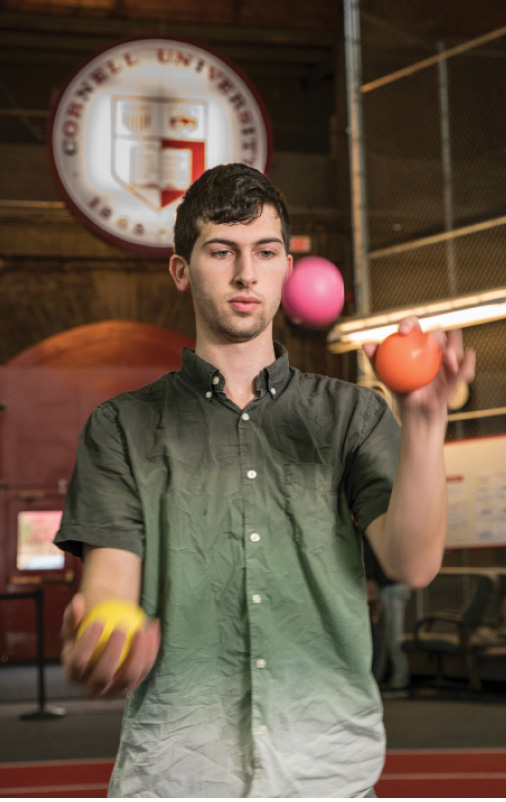 Matan Presberg’s T-shirt reads “Juggling is My Cardio”—and it’s no joke. It’s a fall afternoon in Barton Hall, and the senior computer science major is working up a sweat as he demonstrates one of his favorite combinations, a pattern of tosses and catches in which he starts off by sending four balls whipping around his neck. He then maneuvers them to the front of his body and makes them soar through the air in a figure eight, his movements controlled and fluid even as he moves at hyper speed. “Juggling is an art and a sport,” says Presberg, whose expertise has earned him fifteen world records and myriad other honors. “It’s about focus and thinking multiple steps ahead.”

The current president of the Cornell Juggling Club, Presberg aims to practice two hours each day as he trains for competitions in the U.S. and Canada. During the warmer months, he’s a familiar sight on the Arts and Engineering quads; in the winter he relocates to Barton Hall, whose high ceilings can accommodate his thirty-foot throws. “When I’m focused and practicing, I get into a zone,” says Presberg, whose juggling playlists range from rock to metal to punk. “I have an internal running dialogue where I’ll try something and then analyze it.”

Presberg has been juggling for most of his life: he got hooked as a kindergartener after seeing a performance by a club in his native Rochester, New York. He began attending its weekly practices and soon set a world record by “juggling his age”—six balls. He has since amassed fourteen more, including the record for completing the most four-ball catches (a total of 108) with his eyes closed and for completing the most nine-ball catches (39) thrown from varying heights. In addition, Presberg is a three-time winner at the International Juggling Association Numbers Championship, where he earned gold medals for making the most consecutive catches with the greatest number of balls: using nine balls, he made twenty-five catches in 2015, twenty-eight in 2016, and thirty-three in 2017.

Presberg practices not only technical juggling—which focuses on factors like the number of objects and consecutive catches—but also the “artistic” style, which uses fewer balls and incorporates props, dance, and music. He has performed his routines—such as balancing a hatchet on his nose while juggling three balls—at juggling events on the Hill and at other schools including MIT and Case Western Reserve. Last fall, he took a dance composition class on campus with the aim of expanding his talents. “What I love most about juggling,” Presberg says, “is that there are infinite possibilities.”