By the time you read this, Eli Shanks ’18, BS ’17, will have decamped to roomier accommodations. But for the last year and a half, the CALS student made his home in a decommissioned school bus, parked roughly ten miles from campus in the countryside of Trumansburg. 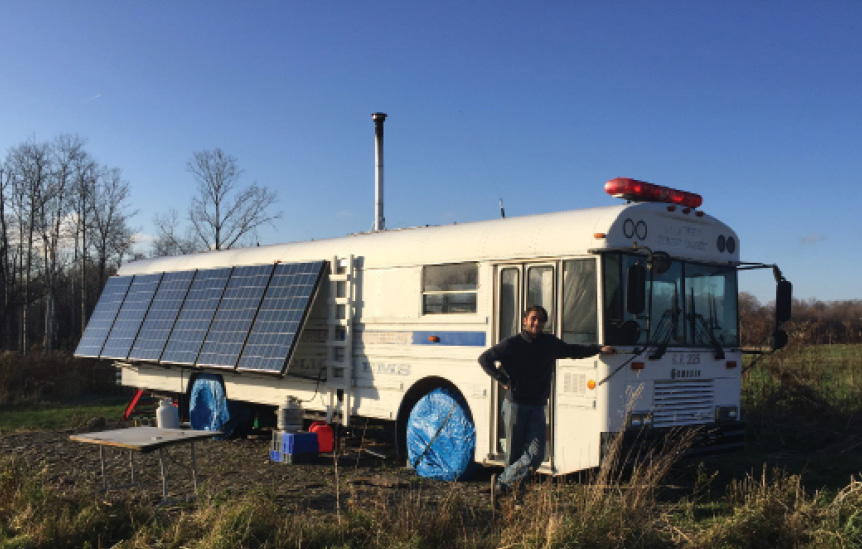 Wheel estate: Eli Shanks ’18, BS ’17, outside the converted bus in rural Trumansburg that he called home for the latter part of his Cornell careerCameron Pollack

Complete with bathroom, pellet stove, oven, fold-up bed, shower, and wireless internet, the cozy abode has all—or at least most—of the comforts of home. It even has its own power source: six solar panels affixed to the outside provide energy for most of the appliances, from refrigerator to vacuum cleaner. “I way overestimated with the solar power,” he says with a laugh, chatting with CAM last fall, weeks before completing his degree in December and graduating a semester early. “I could probably get away with a fifth of the energy. If somebody wanted to put in a projector and entertainment system, they’d probably still have three times what they need.”

Shanks spent the summer after sophomore year laboring to transform the bus, a 1993 AmTran Genesis that he affectionately dubbed the “Command Post” in a nod to its role at the police department that was its second owner. It’s a significant upgrade from his former domicile, a gusty old apartment on the outskirts of Collegetown where rent and utilities were steep. “Last winter here, I spent $400 total on heating—which is what I spent in a month heating that other house,” notes Shanks, a double major in agricultural science and applied economics and management whose unconventional lodgings prompted coverage in the Ithaca Voice and Daily Sun last fall.

According to Shanks—who parks his bus on land donated by an aquaintance—this type of home isn’t as uncommon as you might think. School districts replace their buses well before their lifespan is up, and a full-sized vehicle can be had for $1,000 to $1,500; shorter ones, which tend to be in higher demand, run $3,000 to $5,000. “It’s a lot cheaper than an RV,” says Shanks, who notes that he bought his nearly full-size bus (which was laden with extra equipment from its police days) from a municipal auction in Pennsylvania for $4,100—then sold the generator that came with it for $4,300 and the air conditioner for a few hundred more.

Because school buses are built on a semi truck frame, Shanks notes, “they’re designed to go one or two million miles.” So with 145,000 miles on the odometer, the Command Post is practically brand new. At 232 square feet, it can comfortably host a party of fourteen people, particularly if the bed has been folded up into a couch. Shanks sometimes had smaller, less-welcome guests, too. “The mice here are way too smart,” he says. “They snap all the traps and eat the peanut butter without getting caught. How do they do it?”

After his December graduation, Shanks moved to Chile to be with his partner and their baby—and before he left, he sold the bus for nearly four times what he’d paid. The experience has left him itching to repeat the project. “In Chile,” Shanks says with an eager smile, “they have some cool double-decker buses.”