During the winter in Fairbanks, Alaska, there’s an average of four hours of sunlight per day. Temperatures hover around minus-fifteen degrees Fahrenheit, but can dip to negative sixty; toss a glass of water in the air, and the drops will freeze before hitting the ground. “It’s dark and cold—you have to do something,” says Kriya Dunlap ’98. To the thirty-six-year-old biology professor at the University of Alaska, Fairbanks, “something” involves stepping into cross-country skis, harnessing herself to a sled dog (or two), and racing across the frigid landscape at speeds exceeding twenty miles per hour.

The sport is called skijoring, and Dunlap ranks among the world’s best. A competitive sled dog racer since age four, she has won the Open North American Championship Sled Dog Race multiple times, both in one- and two-dog skijoring, and medaled twice in one-dog skijoring at the world championships. This year, she’ll again represent the U.S. at the worlds in North Pole, Alaska. 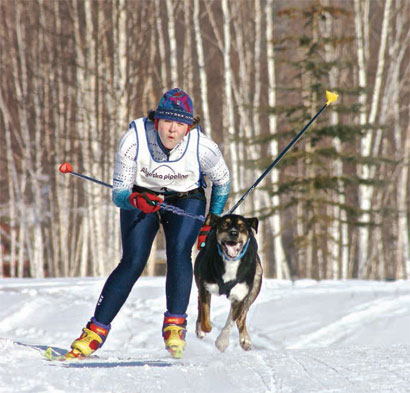 Most Americans know mushing via the 1,150-mile Iditarod or the 1,000-mile Yukon Quest. By contrast, competitive skijoring—as well as sprint dog sledding—involves short distances, typically between three and a half and twelve miles. And while the 2012 Iditarod winner mushed away with $50,400, a good skijoring purse is $500. “It’s usually a gift certificate or something,” Dunlap says. “Obviously, I’m not in it for the money.”

Dunlap grew up with dog sledding; her father was a world champion musher and breeder. “You’ve never heard of him, but he’s a big dog sledding celebrity,” she says. “When I first arrived in Fairbanks, I heard people whisper, ‘Ooh, that’s Harris Dunlap’s daughter.'” The youngest of five, Dunlap helped out with the family’s 150 to 200 dogs at their kennel in a small town in the Adirondacks. Every winter her parents took her along while her father hit the dog sled racing circuit. “My parents home-schooled us on the road,” she recalls. “But if we stayed somewhere awhile we’d go to school there, in Alaskan villages, for weeks at a time.”

In the mid-Seventies, seeking a solution to the problem of dogs suffering cramps during races, her father began conducting nutritional research at the kennel. His work eventually led to what Dunlap calls “the paradigm shift in canine nutrition from a high-carbohydrate to a mostly protein diet.” Later, Arleigh Reynolds ’83, DVM ’86, PhD ’92, replicated and expanded on Harris Dunlap’s original studies during his graduate research on the Hill. When Reynolds became an assistant professor at Cornell, Dunlap joined him as an undergrad, mushing her way through school; in addition to managing the University’s sled dog kennel—running dogs on treadmills, training puppies, “picking up poop”—she raced the Cornell dog sled team. “The B team,” she notes. “Arleigh raced the As.”

In 1998, Purina built Reynolds a sled dog facility in Salcha, Alaska, forty miles south of Fairbanks. Dunlap, newly graduated, headed north for a one-year stint as Reynolds’s veterinary technician. Like many Alaskans, she never left. She eventually designed her own interdisciplinary graduate program in the nutritional biochemistry of sled dogs at the University of Alaska, Fairbanks, alternating summer coursework with winter racing.

According to Dunlap, who earned her PhD in 2007, most sled dog research focuses on performance. But, she says, “I’m more interested in how culturally intertwined sled dogs are in the Alaska native subsistence lifestyle.” Specifically, she sees them as a model of the health benefits (and risks) inherent in a subsistence diet. “In rural Alaska, dogs eat what people eat: salmon, berries, caribou, seal, whale, whatever,” says Dunlap, whose current research involves the wild Alaska blueberry’s possible effect on Type-2 diabetes.

In addition to her academic work—and family responsibilities as the married mother of a three-year-old boy—Dunlap races every weekend from December through March and trains every day, year round. In the summer, for instance, she harnesses the dogs to a bicycle or even (in an exercise known as “counter-cross”) to herself. “It’s kind of stupid, because you can’t run as fast as a dog,” she says. “But it’s fun to try.”