Flocks of migrating birds are seen in the beams of the annual Tribute in Light.John De Guzman

Each year, on the anniversary of the 9/11 terrorist attacks, Lower Manhattan becomes a shining memorial to the nearly 3,000 lives lost. Called the Tribute in Light, it sends two giant beams—each comprising forty-four 7,000-watt xenon bulbs—into the night sky near where the Twin Towers once stood. While the installation is a moving reminder of the tragedy, it has an unintended consequence: the brilliant lights severely disrupt night-migrating birds. “Light can be a serious hazard for birds in terms of being attracted to it, flying around it, colliding with it,” says ornithologist Andrew Farnsworth ’95, PhD ’07. “Whether it’s a single, intense, bright light, or hundreds of buildings that are illuminated, the potential for attraction, disorientation, and major alterations to the way birds behave at night is almost guaranteed.”

A research associate at the Cornell Lab of Ornithology, Farnsworth is an expert in seasonal migration—the massive, twice-annual commute of birds from north to south and back again. For the past decade, he has been based in New York City, working from his home office on the Upper East Side. He conducts on-site research—including deploying microphones in city parks and atop buildings to monitor migration—and works remotely with colleagues in Ithaca, where he spends about two days each month. “There are birds to study everywhere in the world, and New York City is no exception,” he says, noting that about 230 species can be seen on the island of Manhattan. “It’s almost easier than in other places, because green spaces are at a premium, so they concentrate birds. And there’s a lot of artificial light at night, so you can actually see birds migrating. It’s not pristine—not wilderness—but it’s quite a good place to experience bird migration.” 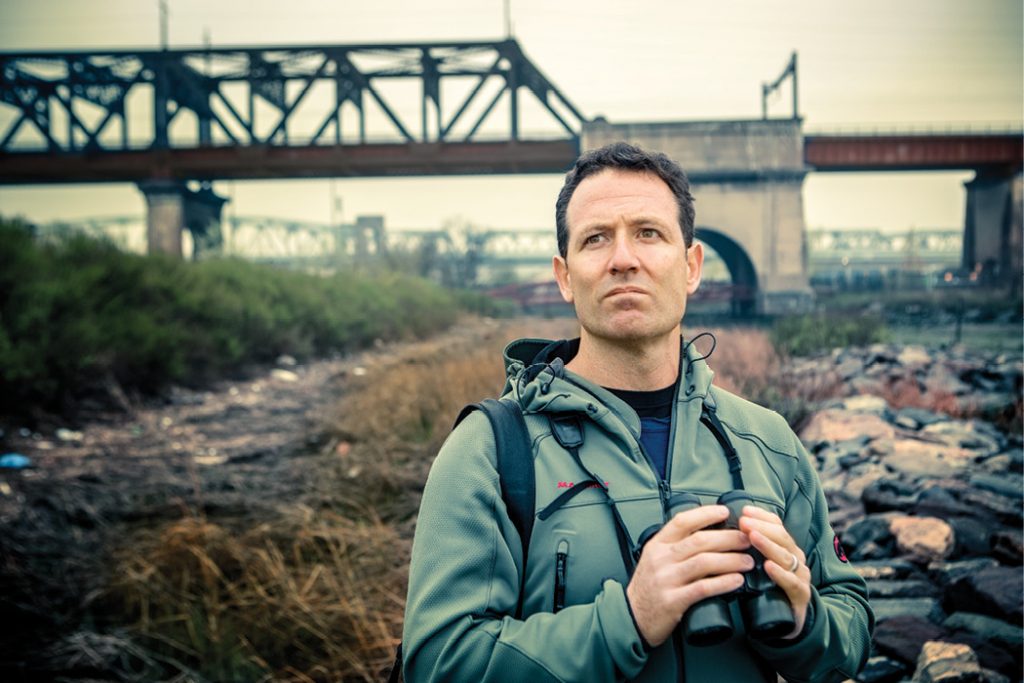 The fact that the Tribute, which began in 2002, would disrupt migration came as no surprise to ornithologists. Farnsworth and colleagues have been monitoring it since its outset; for the past decade, they’ve used radar and acoustic sensors. “On any given migration night, there might be between half a million and ten million birds that pass over the greater New York area,” he notes. “September 11 is not quite when the peak numbers typically occur; that’s about three weeks later. But a great diversity of species are passing then, and there are still huge numbers of birds.” And when bright lights waylay the birds on their journey, it can be deadly: they can become too exhausted to continue, collide with buildings, or fall prey to predators. As Farnsworth and colleagues reported in Proceedings of the National Academy of Sciences last fall, when the Tribute’s lights were on during their study, “birds aggregated in high densities, decreased flight speeds, followed circular flight paths, and vocalized frequently”—and there were twenty times as many birds in the vicinity than normal.

Given the vast numbers of birds potentially harmed by the lights, Farnsworth, New York City Audubon, and other colleagues have been working with the memorial’s organizers to balance the desire to honor the 9/11 victims with the need to protect wildlife; now, the lights are turned off for twenty-minute intervals if more than 1,000 birds are found to be affected, allowing them to resume their journey. Farnsworth and his colleagues have been studying the effects of these pauses, which have not only helped save birds, but could inform understanding of how to mitigate the damage of worldwide light pollution on migrating species. And while the suggestion to temporarily dim the memorial was potentially fraught—the ornithologists’ concern for the birds could have been misconstrued as a lack of compassion for those still grieving the people who perished in the attacks—he says that the project has proved to be a successful collaboration between conservationists, politicians, the tribute’s designers, and families affected by 9/11. “In every case when we’re down at the lights, we meet some of the first responders and the families and friends who lost loved ones, and they want to talk; their stories are heart-wrenching,” Farnsworth says. “And they ask what we’re doing, and they’ll look up, and some say, ‘Those are all birds? I had no idea.’ Some people say it reminds them of snowflakes or angels. No one has said, ‘You’re taking something away from me’—that hasn’t happened, ever.”

In addition to his work on the Tribute, Farnsworth’s major projects have included BirdVox, a collaboration with NYU that aims to automate analysis of audio data to monitor birds acoustically at night, and BirdCast, a system for reporting and forecasting migration nationwide that offers live maps viewable online. Those efforts are heavily technical and data-driven; Lab of O director John Fitzpatrick notes that the evolving nature of bird study makes Farnsworth’s proximity to the New York tech sector, as well as the Cornell Tech campus, that much more advantageous. “I joke that I used to hire people who study birds here at the Cornell Lab of Ornithology,” Fitzpatrick says. “Nowadays, I’m hiring machine-learning specialists, app developers, and parallel processing programmers—I’m hiring engineers.”

A Westchester County native, Farnsworth has been an avid birder since age five, when he picked up his grandfather’s binoculars and copy of a classic field guide. As Farnsworth recalls, he saw a downy woodpecker, a great blue heron, and a male wood duck all around the same time—and he was hooked. A natural resources major on the Hill—Fitzpatrick says he gained a reputation as a “superstar birdwatcher”—he was active in the Ithaca music scene, playing guitar and singing with a locally famous band called Mectapus. After graduation, Farnsworth worked as an ecotourism guide in South America and the Caribbean, played with bands in Austin, Texas, and earned a master’s in zoology from Clemson before returning to the Hill for his PhD. His dissertation, under Fitzpatrick, was on the flight calls of nocturnally migrating birds. “He’s absolutely passionate about birds and nature,” Fitzpatrick says. “He’s got spectacularly good ears and eyes. He’s so good at picking things out acoustically, he’s a marvel to walk through the woods with. A lot of us are pretty good at that, too—but Andrew leaves me in the dust.”

While much of Farnsworth’s work involves remote sensing, he still loves to experience birds the old-fashioned way; his favorite city spots include Central Park, Inwood Hill Park, and the salt marshes on Randall’s Island. His single most memorable sighting in the city came on a Friday evening last May: he was just about to relieve the babysitter and put his daughter to bed when he saw a Twitter alert that a Kirtland’s warbler had been spotted on the west side of Central Park. Farnsworth asked the sitter to stay, grabbed his binoculars, and raced to the subway. “I was going to take the E to the B, but it was an absolute fail—it was rush hour, and the subway was jammed,” he recalls. “So I hopped in a cab, and it got most of the way but got bogged down in traffic.” 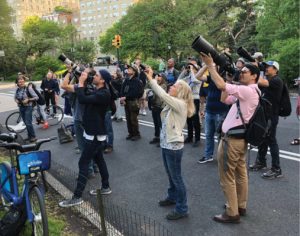 The scene in Central Park in May, when dozens of birders observed a rare visit by a migrating Kirtland’s warbler.Geoffrey Croft

Farnsworth jumped out and ran nearly a mile north to where the bird had been seen, just inside the park at 90th Street. By the time he got there, a hundred people were already viewing the warbler, perched in a tree. “It may be the most incredible sighting in recent New York history,” he says of the rarely observed creature, which breeds in Michigan and Wisconsin and winters in the Bahamas. “The Kirtland’s warbler was a bird I’d never seen anywhere, and I’ve been birding for over forty years.” When Farnsworth eventually left to resume his parental duties, he says, “there were people running into the park from all directions. There was somebody in a three-piece suit running down Central Park West with binoculars.”