Farhad Manjoo ’00 started writing about the tech industry for Wired News just as the first dot-com boom was ending. Today, with the industry on another upswing, he has made it to the major leagues: as of last September, he’s the twice-weekly tech columnist for the Wall Street Journal. In between those two gigs, Manjoo—a former CAM intern and Daily Sun editor-in-chief—wrote for Slate and Salon. Born in South Africa and reared in California’s Orange County, Manjoo majored in economics on the Hill. “But,” he admits, “I was mostly at the newspaper.” In 2008, Wiley published Manjoo’s book True Enough: Learning to Live in a Post-Fact Society.

Cornell Alumni Magazine: Like all Wall Street Journal columnists, your headshot is in the paper’s antique style. What did you think when you saw yourself as a woodcut?

Farhad Manjoo: I thought I looked like an old banker.

CAM: Reader comments are a big part of online journalism, especially at a site like Slate. Does knowing you might get eviscerated affect how you write? 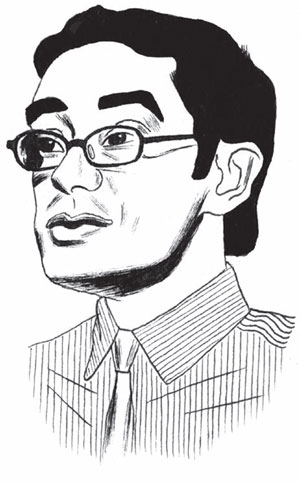 FM: I think it makes me a better writer because it makes me think about objections to a column, and then I can defend my position better. But having said that, it really, really makes me feel bad, though I’ve gotten used to it over the years. Nothing puts me in a worse mood than a negative comment, even if I know it’s totally wrong. I feel like I’ve failed by not having convinced this anonymous person who sounds kind of stupid. I do try to read all the comments because they’re a good way to spot a factual error. But it’s still not good for my mental well-being.

CAM: Which column of yours has caused the biggest firestorm?

FM: Three years ago I wrote something I had no idea would be objectionable, saying it was wrong to use two spaces after a period. It’s by far the most popular thing I wrote at Slate; it might be one of the most popular Slate articles of all time. It got a lot of comments telling me I was stupid and a lot telling me I was brave for taking a bold stance. It was totally surprising. The thing that I learned about writing on the Internet is that it’s completely unpredictable.

CAM: In November, Amazon un­veiled its plans for Prime Air—a delivery system using unmanned drones. Did you think it was a prank?

FM: No, but I probably would have if I hadn’t heard about other start-ups who had the same idea. The video that Amazon put out does look a little Onion-ish; there’s something comical about this machine flying into your backyard and dropping off toothpaste. But drones are one of the few technologies that I’m genuinely excited about. I’m not usually optimistic or pessimistic about technology, but I’m curious to see what will happen with this.

CAM: How has the tech industry changed since you started covering it?

FM: When I started, tech was kind of like the health-care industry or some other niche of the economy. People interacted with tech because it was part of their jobs, but it wasn’t part of the culture at large. Now what I write about isn’t just affecting people at work, but in their lives throughout the day. I feel like I’m writing about a central force of the economy.

CAM: What was it like to come in just as the first dot-com party was ending?

FM: It was scary. It was especially bad in the Bay Area. At Wired a lot of people were laid off, but I was luckily spared. For a while people seemed discouraged about the possibilities for the Internet. I remember the launch of the first iPod, right after 9/11. It turned out to be the device that saved Apple, but no one saw its potential at that point. I didn’t. It seemed like a small gadget released by a company that was a little washed up. One of the things I’ve learned is that we tech writers tend to over-hype the short-term potential of technology and underestimate the long-term.

CAM: What do you remember about those now-legendary Steve Jobs launches?

FM: He made you unbelievably excited about something, even though you didn’t know how it would fit into your life; I’d feel like I needed to run to the Apple Store and buy it. Often he focused on the use of a computer rather than the specs. The launches had this quality that you’d only experienced from infomercials—that this thing that you didn’t even know was annoying you could be so much easier. It was a multimedia experience. He would say things, and on the screen behind him there would be a sloganized version of it. I think if you read a transcript it would sound dull because of its simple language; it would seem like he was talking to small children. But that’s why it worked—it was powerful in its simplicity.

CAM: How does being a tech reporter affect how you use technology personally?

FM: Most of the gadgets that people are excited about, I don’t really get excited about because I see so much. I’ve had the new Xbox for a couple of weeks and I’ve used it a little, but very few things wow me anymore—which is kind of sad. Recently a radio interviewer asked me to describe the most old-fashioned way I do something, and I couldn’t think of a single thing. Almost everything in my house is as technologically advanced as I can make it. I have infrared soap dispensers and a trashcan with an automatic lid.

CAM: What do you think would happen if you got completely cut off—a long-term power failure, say, or a zombie apocalypse?

FM: I would probably do really badly. I have trouble taking a vacation or going to a place where I don’t have an Internet connection. How much I depend on technology, and whether it’s too much or if it’s bad for me, are constant preoccupations. I also sometimes wonder whether I’m worrying too much. A hundred years ago, did people worry that they were getting too dependent on electricity?

CAM: Now for the tech version of “boxers or briefs.” Are you an Apple or a PC man?

FM: I use both. The computer I use for work most of the time is a desktop PC. I have a Macbook Air that’s been my go-to computer for a while because it’s so light. My phones for the last several years have been iPhones, but I’m always getting Android phones to review. I use so many different technologies that I don’t feel tied to any one platform. The one I do feel tied to is Amazon. It’s the first place I think of to buy stuff, to rent or buy TV shows or movies; I spend more money at Amazon than at any other tech company. Being a Prime member kind of hijacks your mind—anytime you think of something you need, you can buy it.

CAM: Here at the alumni magazine we have fond memories of you as an intern. But your stock dropped with us last year when you wrote a Slate column against taking dogs to the office. Have you since seen the error of your ways?

FM: I did get a lot of reaction to that. I still think I’m right. Luckily, I work at home by myself, so I don’t have to impose my intolerant views on everyone else.