Twenty years ago this fall, the greatest prank in Cornell history captured imaginations on East Hill and beyond: one morning in early October, a pumpkin mysteriously appeared atop McGraw Tower. As CAM noted in November/December 1997: “How someone managed to put it up there without getting caught (or killed) is a mystery.”

Who had perpetrated the prank? How had they gotten away with it? Was it a real pumpkin? And if so—as the weeks passed, and Halloween came and went—how could the thing stay up there so long without rotting?

The clocktower pumpkin became a phenomenon on campus and beyond, prompting Halloween costumes, a chorus of hectoring jack o’lanterns, and stories in the New York Times.

As the gourd—a Cucurbita pepo, to be agriculturally precise—persisted atop McGraw, pumpkin mania spread. There were multiple stories in the New York Times; Matt Lauer interviewed the editor-in-chief of the Daily Sun on the “Today” show. Four physics majors sampled the vegetable using a remote-controlled balloon. A Pumpkin Watch website offered a live video stream. When ABC’s “World News Tonight” came calling, the Glee Club and Chorus sang the Alma Mater with a new lyric:

Far above Cayuga’s waters, with its waves of blue,
Stands our noble orange pumpkin, glorious to view. 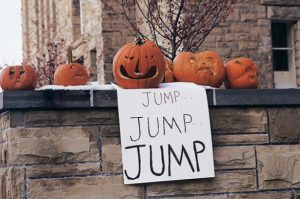 The University—which had fenced off the tower’s base, lest the gourd plummet at terminal velocity and bean someone on the head—decreed in mid-March that it was time for the pumpkin to come down. A gala ceremony was planned, complete with pumpkin T-shirts and pumpkin ice cream. Cornell’s provost was scheduled to pluck the vegetal celebrity off the spire in a crane-hoisted basket when fate intervened: due either to a gust of wind or human error, the pumpkin was knocked off during a test run and landed two stories below, on scaffolding erected for the McGraw Tower renovation. But thanks to the Ithaca winter, the pumpkin was frozen solid and—though a funky shade of yellow and resembling a melted candle—relatively unscathed. The verdict: it was indeed a pumpkin, carved to fit on the spire; it endured because it had been freeze-dried by the elements.

And what of the mystery of who had done it—and how? A couple of years later, Sun editor-in-chief Farhad Manjoo ’00 was contacted by an informant who claimed to know the answers—and had enough details to make a plausible case. 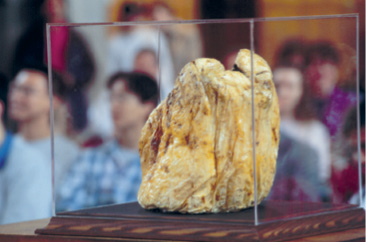 The dessicated gourd after retrieval; a portion of its remains are currently stored in the psychology department (where it once went on cheeky display as part of Cornell’s famed brain collection).
Photo: University Photography File Photo

As Manjoo reported in CAM in September/October 2000, this Deep Throat confirmed the long-held suspicion that the perpetrators were local climbing aficionados. The informant described how one of them—Manjoo code-named him “Kennedy”—went inside the tower and hid until the chimesmasters left, then disabled the door locks with duct tape. Kennedy and two confederates (“Reagan” and “Nixon”) snuck in at midnight, armed with wire cutters, rope, and the pre-cored pumpkin. After taking the stairs to the top, they free-climbed using the interior beams, then cut the padlock on the wire grating that blocked off the roof. Kennedy climbed up to the access hatch, went outside, and scaled the roof tiles; he hauled the pumpkin up on the rope, speared it atop the spire, and climbed down. “When he got back inside,” Manjoo wrote, “they laughed for fifteen minutes, then went for a beer.”

Manjoo’s informant never disclosed the identities of this wily, agile trio—and though their deed lives in legend, they’ve never publicly claimed credit. “After the pumpkin became a national sensation,” Manjoo explained, “they got scared of getting into deep trouble.”

One thought on “Out of Their Gourd”