The winter of 2012–13 was a miserable one for New England. Alan Nawoj ’01 might be the only person who was happy about it.

The snow, ice, and bitter cold helped the Boston-area software developer train for the Antarctica Marathon. And he didn’t just finish; he won. “I did some twenty-mile training runs in six inches of snow,” Nawoj recalls. “Looking back on it, it sounds kind of crazy.” But arguably not as nutty as the regimen followed by one fellow racer, who hailed from South Africa. “He did a lot of training on a treadmill inside a meat freezer,” Nawoj says, “with a fan blowing cold air on him.” 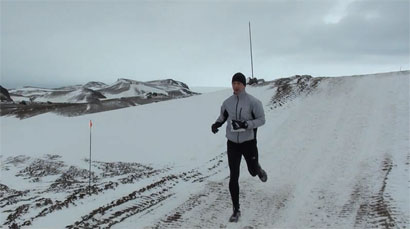 The race, held in late March, brought Nawoj one step closer to his decade-long goal of running marathons on all seven continents. He has checked off six so far. In addition to multiple outings at the New York, Boston, and Chicago races, the former electrical and computer engineering major has run in Rio, Singapore, Paris, Stockholm, Krakow, and Auckland; he aims to complete the Africa leg in the next couple of years, either at the Kilimanjaro or Marrakesh races. (His personal best time, marked in New York in 2008: 2:52:27.) Antarctica was Nawoj’s nineteenth marathon and his first win, with a time of 3:29:56. “The events I run in usually have world-class runners and Olympians,” Nawoj notes. The victory, he says, “is still sinking in.” 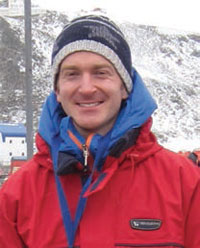 Just getting to the race was an event in itself. The night before Nawoj was scheduled to fly to Buenos Aires to meet the other runners, he got an urgent e-mail: the Russian research vessel chartered to take the group to Antarctica had hit an iceberg. The race was rescheduled for three weeks later, forcing some participants to drop out and others to scramble to rework travel and vacation plans. Onboard the replacement ship, Nawoj and his fellow athletes had little chance to exercise and suffered from seasickness on the rough ride through the Drake Passage. On the morning of the race, though, the ninety-two runners lucked out—at least by South Pole standards. Temperatures were in the relatively balmy low twenties, the wind died down to around twenty knots, and it wasn’t snowing. Despite a hard fall on ice three miles in, Nawoj took an early lead and held onto it, completing what he calls a “brutally hilly” course nearly eight minutes ahead of the second-place finisher. Then he keeled over from hypothermia. “I pushed so hard during the race,” he says, “that I didn’t have much left in my body when I finished.”

He was taken to a Russian research base, where he was revived with blankets, warm water, and tea. His prize for traveling some 9,000 miles to win a race at the bottom of the world: an engraved plaque.