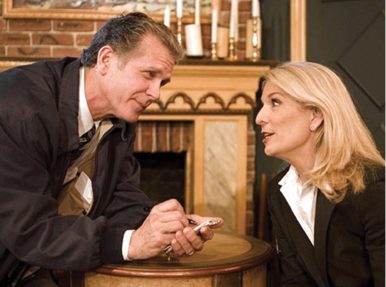 Catherine Russell ’77 in the current production with costar Richard Shoberg of “All My Children” fame.

“I’ve never been a big vacation person,” says Catherine Russell ’77—demonstrating that along with her talent for acting, she has a serious gift for understatement. The star of the long-running Off-Broadway whodunit Perfect Crime, Russell has appeared in all but four of the show’s more than 12,000 perform­ances since it opened thirty years ago. And to be clear: she only missed those to attend her siblings’ weddings.

In December 2008—more than 3,400 shows ago now—she broke the Guinness world record for the most theater performances by a woman in the same role. Perhaps inevitably, People has dubbed her the “Cal Ripken of Broadway.”

Since April 18, 1987, Russell has played eight shows a week as one Margaret Thorne Brent, a brilliant and intense psychiatrist who may or may not be a killer. Over the course of several fraught days in her well-appointed living room in a tony Connecticut town, the high-strung Margaret copes with—and this is just for starters—a dangerously unhinged patient; a distant and eccentric husband; a vanished cook; a mysterious connection to a murdered girl; and the attentions of a police inspector who’s as persistent as he is alluring. “The older we get the wiser we get, so in some ways I think the character has more layers now,” Russell observes. “Over the years, everything that has happened in my own life has given me a better sense of how to play her.” 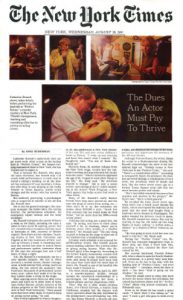 The play itself has also evolved. When it opened—to a New York Times review that, while mixed, said it had “the makings of a crackling thriller”—it was three hours long. Actor-playwright Warren Manzi spent years reworking it, Russell says, often making changes at the last possible second. “He would literally give me rewrites right before I went onstage—he’d grab me and I’d have to shove him away,” she recalls with a laugh. “He’d give me a speech and say, ‘Put it in the second act; it doesn’t have to be verbatim.’ But that was good. I got to live with the part.” While the script has stayed roughly the same for more than twenty years, it has been updated for changes in technology and pop culture: car phones became cell phones, and Phil Donahue gave way to Oprah. “I didn’t start out saying I was going to do it for years and years, but I like security,” Russell says. “On the Internet, people are like, ‘She must be a crazy, poor, tragic person. Can’t she do anything else?’ But I like doing the same thing over and over, and I’ve been lucky enough to find something where I could do that.”

Russell with castmate in 1987

Russell has worked with—and shot at, and kissed, and been slapped by—dozens of co-stars over the decades; her current foil as the dogged detective is Richard Shoberg, a 1978 Emmy nominee for the soap opera “All My Children.” Last fall, movie star Gary Busey did a two-week run as Margaret’s disturbed patient, with the understanding that he could adapt the part to his persona. “He was really good—what a lovely man,” Russell says. “He probably said 25 percent of the lines and the rest were paraphrased, but things like that make still doing the show fun. Having different people come in makes it interesting, so I’m not bored. If I ever felt like, ‘Oh my God, I don’t want to go onstage,’ that would be the time for me to stop. But I haven’t gotten there yet.”

As in all live theater, there have been surprises and malfunctions. There was the time that a kid in the second row projectile-vomited onto the stage. Or when the show went on as paramedics treated an audience member for a suspected heart attack. Once, the play had to be restarted because the stage manager forgot to set a gun backstage. “Now the gun’s in my dressing room,” Russell says. “And we have backup guns.” The set had a glass table, until an actor dropped a gun on it and it shattered mid-performance. Back when Russell used to bring her dogs to work, one of them ran onstage at intermission and ate a coffee cake that is key to the plot. “I’ve tripped down the stairs and I’ve fallen flat on my face,” she says. “I’ve had my dress fall off. I was younger then, and I wasn’t wearing a bra.” 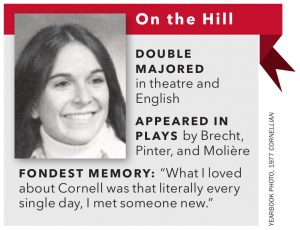 At sixty-one, Russell is still able to knock out the 180 consecutive push-ups with which she starts each day. She credits the fact that she has never called in sick to a strong work ethic, her faith as a Christian Scientist, and a “really good immune system.” In addition to her gig as Margaret, Russell—who earned a master’s in educational theater from NYU after graduating from Cornell—teaches acting at NYU, CUNY’s Baruch College, and the Theater Center, the multi-stage venue near Times Square where Perfect Crime is performed. She also manages that facility, home to another famously long-running show (The Fantasticks, which is set to close in June) as well as rehearsal spaces used by Broadway musicals like Hamilton and School of Rock. On the Wednesday afternoon in March when Russell chatted with CAM after the show, she not only starred in the two o’clock matinee, but sold tickets for The Fantasticks, made arrangements to have the building’s boiler fixed, and took out the trash.

In short: if there is a term that means the opposite of “diva,” it describes Russell to a T. “In the Guinness Book, I’m listed next to the world’s tallest horse—and the horse got a picture and I didn’t,” she says with a chuckle. “So I really know my place in the universe.”