The denizens of Wrigley Field’s grandstands know a few things about their regular beer vendor—that thirty-something fellow with the thick-framed glasses and the unruly mop of black hair. Like, if a game starts to drag, he’ll often add a goofy voice or Italian accent to his usual, “Hey, beer man! Cold beer!” And if a customer praises his dexterity in pouring two cups simultaneously without spilling a drop, regulars can expect him to reply, “Hey—this is the major leagues!”

But few realize that this longtime Wrigley character—a familiar sight for the past eighteen seasons, peddling his product just a few steps from the iconic, ivy-draped outfield wall—has a whole other life. Or, rather, he has several of them: as a double-Ivy grad, a journalist, an improv actor, a playwright, even a game-show contestant. “To the vast majority, I’m just the tall, weird-looking guy blocking their view,” says the suds-slinger in question, Justin Peters ’03. “I’m the friendly, anonymous beer vendor.”

A lifelong Cubs fan from the Chicago suburb of Lake Bluff who grew up attending games with his dad, Peters has been vending since the summer after freshman year, when he realized the job would get him into Wrigley for free. “It seemed like more fun than an internship,” recalls the former American history major, “and I always had better stories when I got back to school.” And though he no longer lives in Chicago, he continues to work about two dozen games each summer. Outside of baseball season, Peters divides his time between New York and Washington, D.C., where his wife, Alexa Mills ’03, is managing editor of the alternative weekly City Paper. When working at Wrigley, he often stays with his parents and commutes thirty miles to Chicago’s North Side. “I’ve never wanted to give it up,” says Peters, who averages 300-plus cups of brew sold on a good day. “It ties me to home, to something I’ve loved all my life.” Peters even got to witness baseball history last November, when he peddled libations during the Cubs’ first World Series appearance in seventy-one years. “It’s something no one ever thought they’d see,” he says. “And I got paid to be there.” And to top it all off: he served one of the team’s most famous superfans, comedy star Bill Murray. 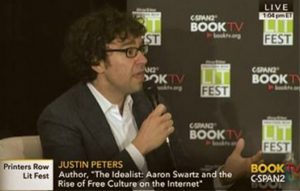 But to label Peters a beer vendor is akin to shrugging off Murray as a guy who used to be on “Saturday Night Live.” With a master’s from Columbia’s Graduate School of Journalism, Peters is a longtime correspondent for Slate; his notable recent work includes an essay (headlined “Journalists Should be Terrified”) about Donald Trump’s attempts to demonize the mainstream press and an obituary on conservative media mogul Roger Ailes, whom he dubbed “the banished goblin king of Fox News.” Peters penned the 2016 nonfiction book The Idealist: Aaron Swartz and the Rise of Free Culture on the Internet, about a computer prodigy and advocate for open information access who hanged himself after being indicted for illegally downloading millions of academic articles. On the lighter side, he has written for Slate about everything from indoor axe-throwing playgrounds to a tongue-in-cheek attempt to live out the New York Times’s “Style” section’s trends, like wearing his hair in a “man bun” and sprinkling his conversations with British slang. While covering the Olympics, he investigated which athletes are the best huggers and lamented that figure skaters keep performing to the theme from Schindler’s List. 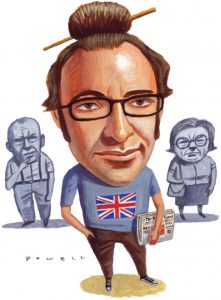 Peters in an illustration for his Slate essay about sporting a “man bun”.Illustration: Charlie Powell

Peters also has a career as an improv comedian. With his friend Kelly Buttermore, he regularly tours as the male half of an arty act called “From Justin to Kelly”—a nod to the cringeworthy 2003 “American Idol” film of the same name—known for performing long, minimalistic sketches emphasizing silence and eye contact. The duo has performed and led workshops nationwide; co-founded the Count­down Theater, a “roaming pop-up improv collaborative”; and launched an improv festival in Tampa, Florida. Separately, Peters has written and performed shows with quirky titles like Confessions of a Condiment Hustler and Kill Yourself! with Deke Davis, which he touts as a “country-western euthanasia musical.” “It’s reductive to think you have to do just one thing and be satisfied with it,” he says. “A lot of stuff makes me excited. There’s always something new. I’m never bored.”

And never boring. As a contestant three years ago on the syndicated quiz show “Who Wants to be a Millionaire,” Peters vowed (as he later explained in Slate) to “play until I reached damnation or glory.” Indeed, instead of pocketing $250,000, he opted to guess on a $500,000 question about alcohol consumption in the British House of Commons. He got it wrong and dazedly walked away with one-twentieth that amount—although he was later invited for a return appearance and took home an additional $50,000. “I had it within me to take that chance,” he says of the lesson learned from his massive monetary misstep. “I’m never going to fail more visibly than I did on that show.”