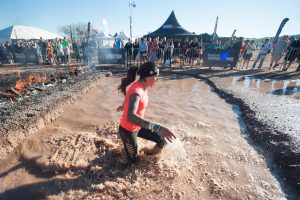 There’s the Atlas Carry, in which competitors have to tote a boulder the size of a beach ball. And the Tyrolean Traverse, in which they haul themselves across a horizontal rope before dropping into the water and swimming to shore. And the Fire Jump, the Tire Drag, the Spear Throw, and the Barbed Wire Crawl—all pretty much what they sound like. If a competitor fails to complete any of them, he or she has to do thirty of the pulse-pounding squat-thrusts known as “burpees.”

These challenges and more await participants in Spartan Races, extreme athletic events that combine distance running with a series of grueling obstacles. Founded in 2010 by Joe De Sena ’90, the races are meant to evoke the ordeals that humans faced in earlier times—with participants aiming to be as tough as the legendary warriors for which the events are named. “We looked at, What should a human being be proficient at?” says De Sena. “For a very long time, humans used to throw a spear, and we lost that skill. You should able to climb a wall, crawl, climb a rope.”

‘Sitting on the couch watching TV doesn’t feel good. You have to get people outside, get them reconnected with the earth.’ 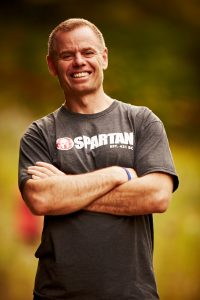 De Sena is speaking via Skype from Singapore, where he and his family live. He and his wife relocated from Vermont in part because they want their kids to speak fluent Mandarin and be proficient in martial arts—and also because he sees Asia as the biggest growth market for Spartan’s expanding business. This year, he says, some 150 Spartan Races will be held in thirty countries worldwide. They range from the entry-level Sprint (about three miles and twenty obstacles) to the Super (eight miles, twenty-four obstacles) to the Beast (twelve miles, thirty obstacles) and even the Ultra Beast (twenty-six miles, sixty obstacles). As the Spartan website notes about the latter: “There is no map or details for the course. Don’t bother asking because we will not tell you. As always, if you’re not sure if you’re ready, or you spend more than one hour per year at Bed Bath & Beyond, please only register for the Beast. The Ultra Beast will be too much for you.”

Spartan also offers races for kids aged four to fourteen, and for people with intellectual and developmental disabilities. Through a program called Spartan Edge, it trains educators and works with kids to promote what De Sena calls “resilience and grit” among youngsters. De Sena has authored two selfimprovement books, 2014’s Spartan Up!—which applies the races’ axioms to overcoming life’s obstacles—and Spartan Fit, a training guide coming out in August. “We are animals, and somehow along the way we forgot that,” De Sena observes. “When we were starving and emaciated and coming out of the Dark Ages, it made sense that it was cool for people to get fat, because it meant they were wealthy and doing well—but now it’s completely out of hand. Sitting on the couch watching TV doesn’t feel good. If you think of the things that feel really good in life, they’re all primal. You have to get people outside, get them reconnected with the earth.”

A diehard BMX biker as a kid, De Sena spent part of his childhood in Ithaca; he recalls talking some friends into cycling all the way to Greene—forty-plus miles east—to attend a race when they couldn’t cadge a ride there. His major in the College of Human Ecology—textiles and apparel—may raise some eyebrows given his current gig, but he notes that not only did it have a strong business component, but nowadays it comes in handy for Spartan’s thriving business in athletic gear, from T-shirts and hoodies to a line of branded Reebok sneakers. Plus, he says with a laugh: “I know all about women’s hemlines. I could watch a movie and tell you exactly the era when it takes place based on the clothes.”

De Sena had the entrepreneurial itch early on, supporting himself in college by running his own construction firm back home in Queens, where he returned most weekends. (As he notes, while pointing out that fitness doesn’t require fancy equipment: “I was in the best shape of my life laying bricks and mixing cement.”) Working on Wall Street for more than a decade starting in the Nineties, he sought stress relief in adventure races—multi-sport treks stretching hundreds of miles across all manner of terrain. Says De Sena: “My personal ethos is that if I can go the easy way or the hard way, I’m always going the hard way.” A sideline in organizing adventure races eventually morphed into Spartan—which, he says, he conceived with the ambition that obstacle racing would someday be an Olympic event, a goal he has been pursuing for years. After all, he says, the sport embodies the Games’ essential spirit of athleticism and perseverance. “We have to get out of our comfort zones—that’s when life is best,” he says. “Suffering is good. You want to feel alive, take a cold shower.”

And how does De Sena jibe Spartan’s growing popularity with the fact that humans in general are only becoming heavier and more sedentary? As he sees it, the former is a reaction to the latter. “Seven billion people in the world are going in the wrong direction, but a few are waking up saying, ‘I don’t want to feel like this,’ just like I did,” says De Sena. “I was on Wall Street, sitting at a desk typing every day, getting out of shape, and it didn’t feel good.” And though a Spartan Race may seem out of reach to the average person, De Sena holds that just about anyone can work up to it; on its website, the company posts training plans aimed at preparing participants for a Sprint in just three months. “If, God forbid, we were in a car accident and had to hike twenty-six miles through the woods, over walls, and under barbed wire to get to safety, we would do it, because we want to survive,” he says. “Seventy-five-year-olds do these races. It’s all a mindset of what you can and can’t do. And by the way: life’s a lot shorter if you’re not out doing this stuff. You need to move blood around, to eat healthy—otherwise, you’re not going to be here very long.”

Adam Slutsky ’85: In a Tough Mudder, It’s All About Teamwork 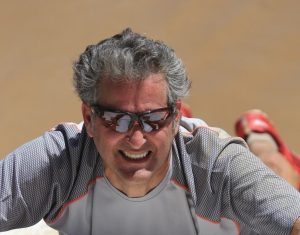 “If you’re a senior manager running a company,” says Adam Slutsky ’85, “I think you should experience its product.” For Slutsky, that hands-on ethos put him on the side of a mountain 7,000 feet above sea level, filthy dirty and drenched in sweat as he ran a Tough Mudder—a tento twelve-mile event involving more than twenty obstacles, some 500,000 gallons of mud, and forty tons of ice. A veteran entrepreneur who made his mark nearly three decades ago by co-founding Moviefone, Slutsky became president and COO of Tough Mudder in 2013. One of his first acts was to participate in a Mudder in Lake Tahoe alongside the company’s founder and CEO, a former British counterterrorism officer. “I definitely am a sports enthusiast, and very much an outdoors person,” says Slutsky. “I’ve always taken care of myself, eaten well, and paid attention to physical fitness.”

Mudders require strength and stamina, but mental toughness as well: in addition to climbing walls and slithering through tunnels, participants face such ordeals as Shock Therapy—they run through a tangle of wires delivering 10,000 painful volts of electricity— and Arctic Enema, a dunk in a dumpster filled with ice water. “It’s denoted as probably the toughest event on the planet,” says Slutsky. “That sounds like an extreme thing. But when you actually get into it, you learn that while it’s an extraordinarily difficult thing to accomplish, most people use it as a kind of rite of passage. It’s their motivation to get off the couch.” 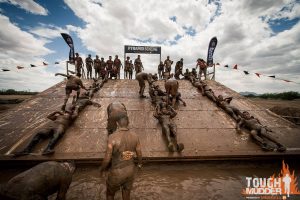 Slutsky stresses that Tough Mudder events aren’t races but “challenges”; they aren’t timed or ranked, and nearly all participants enter in teams of around six people. Mudders are designed to be social events; entrants not only get a T-shirt, a headband, and bragging rights, but a cold beer afterward. “It’s not about going against the clock, it’s about doing the best you can,” he says, noting that entrants who can’t handle an obstacle can simply bypass it. “The goal is to get through the course. Yes, there are military-style obstacles and a lot of mud. But the vast majority of obstacles—in addition to being big and badass—are ones that can’t be accomplished unless you work as a team. It fosters a spirit of camaraderie, where people at different levels help each other.”

An ILR grad who holds an MBA from Columbia, Slutsky cofounded Moviefone in 1989; it was sold to AOL a decade later for $550 million. He was CEO of the online printing and document delivery company Mimeo for eight years and also served on the advisory board of Canyon Ranch, a chain of high-end health resorts. At Tough Mudder, he’s in charge of day-to-day operations; recent accomplishments include the licensing of the brand to IMG, which is launching Mudder events in foreign cities like Dubai and Shanghai. During his tenure, the company struck a deal with Merrill to create a specially designed shoe that repels mud and is washable. It also debuted the Half Mudder, a more accessible event over a five- to six-mile course that omits the most intimidating obstacles like Shock Therapy and Arctic Enema. “Those things are iconic for the brand,” Slutsky says. “But a lot of people say, ‘Yeah, I’ll watch my stupid friend do that. I’m not doing it.’ ”

‘It’s not about going against the clock, it’s about doing the best you can.’

Speaking of which: Why does Slutsky think anyone would want to endure ice water and electric shocks, anyway? “It’s overcoming a fear,” he says. “It’s pushing yourself to a place that’s uncomfortable. And people think, I’ll be there with my friends, it’ll be over in a second—and damn it, I want to say I did it.”