WOMEN’S GYMNASTICS Cornell won its second ECAC title, posting a score of 193.925, just a tenth of a point shy of the school record it set earlier in the season. The Big Red dominated the league’s yearly awards as well. Lyanda Dudley ’19 shared the ECAC title on the beam and was named Rookie of the Year, while Kaitlin Green ’19, the ECAC Specialist of the Year, was a co-winner in the vault. Cornell’s Paul Beckwith was named ECAC Head Coach of the Year, and Melanie Dilliplane was named Assistant Coach of the Year.

WOMEN’S POLO Cornell won its second straight US Polo Association National Championship, and 15th overall, by beating Texas A&M 13-11 in the title match April 9, in Storrs, Connecticut. The Big Red trailed 10-8 going into the last chukker, but reeled off five straight goals to take a 13-10 lead with 90 seconds to play. Anna Winslow ’16 and Elena Wicker ’16 each scored six times for the Big Red, with Emma Eldredge ’17 scoring the other goal. Cornell finished the season 17-2 and both losses were by one goal.

EQUESTRIAN The Big Red finished seventh out of 16 teams in its first trip to the Intercollegiate Horse Show Association Nationals in May. Amanda Symons ’16 was third in the Individual Walk Trot and Claira Seely ’17 was fourth in the Novice Flat. Former Big Red rider Emily Kowalchik ’13 (below) was champion of the alumni fences event.

WRESTLING Cornell added two more national championships in 2016. Gabe Dean ’17 won his second straight title at 184 pounds, finishing the season at 37-1. Nahshon Garrett ’16 won the 133 pound title to finish 37-0. He leaves East Hill second on the Big Red’s career wins list with 149 and has the school record for NCAA tournament victories (20). Cornell now has 13 wrestlers who have won a total of 19 national championships.

MEN’S GOLF Luke Graboyes ’17 became the third Cornell golfer to earn medalist honors at the Ivy League Championship, carding a three-day score of 211, which was five shots over par at the Metedeconk National Golf Club in Jackson, New Jersey. He’s the first Big Red player to win the event since Jim Bird ’86 in 1986. Mike Graboyes ’18 finished eighth to earn All-Ivy honors and lift the Big Red to a fourth place team finish, its best since a second place run in 2005.

CHEERLEADING Cornell won the Ivy Classic title, edging Harvard by one-tenth of a point, 167.1 to 167.0. The event marked the first cheerleading championship for Ivy League squads.

WOMEN’S LACROSSE After opening the season with a team-record eight straight wins, Cornell finished as Ivy League champions for only the second time in program history and notched its first NCAA tournament win since 2002. The Big Red beat Penn 11-10 in the Ivy League tournament final after downing Princeton 10-9 in overtime in the semifinal. Cornell then beat Canisius 15-11 in the opening round of the NCAA tournament before losing to the University of Massachusetts 7-6 in the second round. Catie Smith ’17 and Joey Coffy ’18 (above right) were both named first-team regional All-Americans. Smith led the league in turnovers while Coffy collected 26 goals in 19 games. 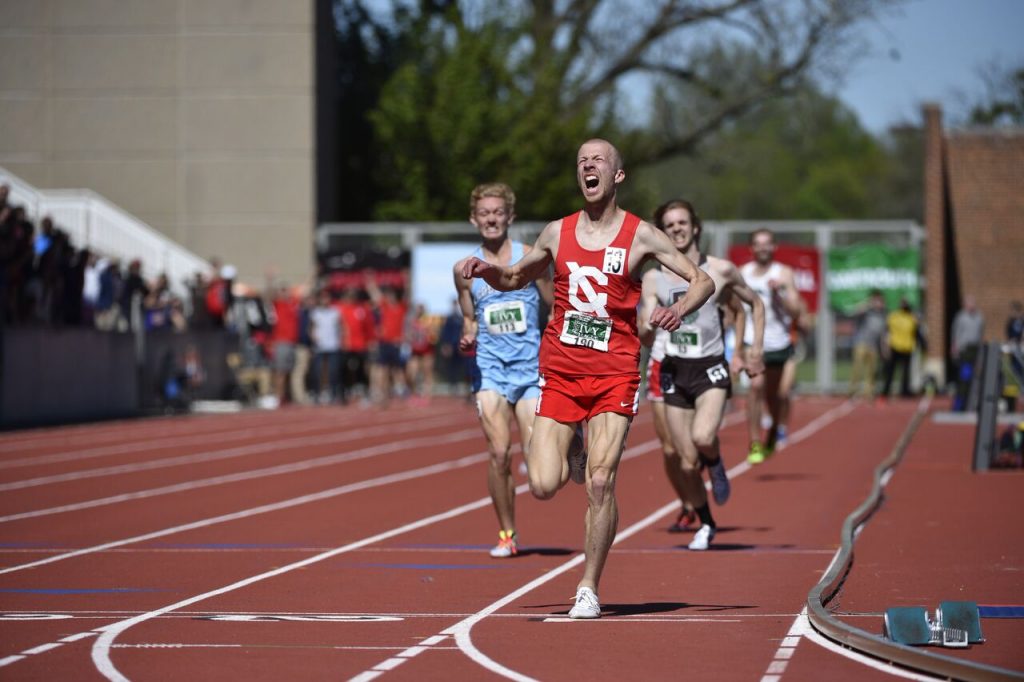 MEN’S TRACK AND FIELD The Big Red turned in a historic performance to take its 16th outdoor Heps title last spring, winning half of the 22 events to post a meet record 211 points. Rudy Winkler ’17 was named the meet’s field MVP after winning the hammer throw with a league-record toss of 75.10 meters (246 feet, 5 inches), which was the best in the NCAA to that point and good enough to earn National Athlete of the Week honors from the US Track and Field and Cross Country Coaches Association. Ben Rainero ’16 (left) was named the track MVP after winning both the 5,000 meters (14:17.26) and 10,000 meters (29:41.73).

MEN’S BASKETBALL Bryan Colangelo ’87 is back in charge of an NBA team. The former Cornell player was named president of basketball operations for the Philadelphia 76ers on April 10. He has previously served as general manager of the Phoenix Suns and the Toronto Raptors, earning NBA Executive of the Year honors after the Raptors won their first division title in 2007. Colangelo had served as a consultant to several NBA teams and player agents since leaving the Raptors in 2013.

MEN’S HOCKEY Joe Devin ’11 lived a dream of every professional hockey player, scoring an overtime goal in game seven of his league’s playoffs. Devin’s goal for the South Carolina Stingrays in the ECHL (formerly known as the East Coast Hockey League) came deep in the second overtime of the game, during the Eastern Conference semifinals against the Adirondack Thunder. It was his ninth goal of the playoff season and fourth gameseven goal of his pro career. During the regular season, Devin had 18 goals and 23 assists in 55 games with the Stingrays in addition to five goals and two assists for the Lake Erie Monsters in the American Hockey League.

WOMEN’S SOCCER Tori Christ ’14 is in her second professional season in Europe, playing for Rovaniemen Palloseura in the Finnish Premier League. She spent last season with Västerås BK30 in Sweden, where she was spotted by the coach of Rovaniemen Palloseura. Christ started 20 games in net for the Big Red and collected two shutouts.

MEN’S BASKETBALL Cornell looked to a league rival for its new head coach, tapping veteran Princeton assistant Brian Earl for the job. Earl, 39, played for the Tigers in the late Nineties and was the Ivy Player of the Year in 1999, playing professionally after graduation.