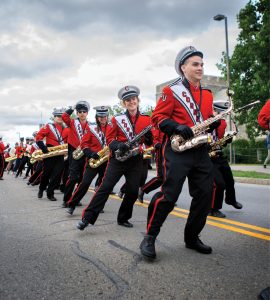 For more than a century, the Big Red Marching Band has brought tuneful joy to East Hill and beyond. Students and alumni delight in singing along to “My Old Cornell,” getting revved up by “Give My Regards to Davy,” and locking arms and swaying to the Alma Mater. At home football games, fans in the Crescent eagerly await the halftime show, when the band sweeps smartly across the field in synchronized patterns as it plays songs both time-honored and contemporary. “There is no more spirited group on campus than the members of the Marching Band,” says Scott Pesner ’87, who played clarinet all four years of undergrad. “They evoke pride and carry forward school traditions from one generation to the next.”

The only bona fide marching band in the Ivies—the others are technically “scatter bands,” which don’t march in formation—the group operates under the umbrella of the Big Red Bands, which also includes the smaller Pep Band (of Lynah Rink fame). It’s completely student-run—from the head manager who coordinates events and travel, to the drum major who runs rehearsals and leads the band (including its color guard, which performs routines with flags, mock rifles, and other equipment) during shows. The choreography, or “drill,” is designed by a small committee of members who also select the music. “The band is like a family,” says current head manager Jill Crosby ’21, a policy analysis and management major from Pennsylvania. “We have engineers, bio majors, Human Ecology students. We all support each other.”

The Marching Band’s schedule is rigorous, with the roughly 250 members asked to meet four or five times a week for music practices, field rehearsals—where they perfect walking with a smooth heel-to-toe step, taking small strides, and lifting their knees high—and performances, not to mention the individual instrumental practice that many put in. “It can be a lot,” says biology major Sabrina Giaimo ’22, who joined as a saxophonist but now plays trumpet. “You have to be reading the music, thinking about the next move, and trying to watch the drum major at the same time.” While formal auditions are held during Orientation each fall, nowadays no student is turned away, and musical experience isn’t required. “We teach newcomers the basics, and they learn as we go along,” says Crosby. “At the end of the day we just want everyone to have a great time.” 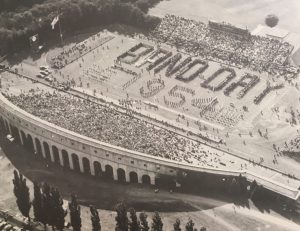 The band in formation in Schoellkopf in 1954.Rare and Manuscript Collections

Most active during fall semester, the band plays at every home football game and a handful of away ones, as well as at festivals and concerts in Ithaca and on campus, occasional NFL halftime shows, and special events like weddings of band alumni. As the group notes on its website: “We are also known for our spirited parading through the Campus Store, Willard Straight Hall, and, when we’re feeling truly studious, the circulation room of Uris Library.” Every other year, the band leads a crowd down Manhattan’s Fifth Avenue for the Sy Katz ’31 Parade, which culminates in a concert outside the Cornell Club on East 44th Street. Pesner recalls that when he was a senior, construction blocked the typical route, so the band arranged to finish on the steps of the New York Public Library. “We were right between the lions,” he says. “You can’t beat those memories.”

The band’s roots go back almost as far as the University itself, to the formation of the ROTC Cadet Band in the early 1870s. As Morris Bishop 1914, PhD 1926, wryly observed in A History of Cornell: “Its marching evolutions were likely to be surprising. At a review of the troops the band was supposed to march, playing, before the battalion at attention, and then reverse direction and countermarch. The maneuver was too difficult; the band simply marched off home.” Likely due to its ROTC beginnings, for decades the band was only open to men—but by fall 1970, that restriction had put it in danger of losing its University funding. Sandra Sears ’74, the first of four women to join that year, recalls that when she showed up to the band room in Barton Hall, she was greeted with cheers. “By the time I actually auditioned,” she says, “I was pretty sure that if I knew which end of the clarinet to put in my mouth, I was going to get in.” At Homecoming this fall, the band marked the fiftieth academic year of women’s inclusion with a special performance during halftime that included honoring some of the first female members; alumni joined in playing such songs as “Confident” by Demi Lovato and Aretha Franklin’s “(You Make Me Feel Like) A Natural Woman.” 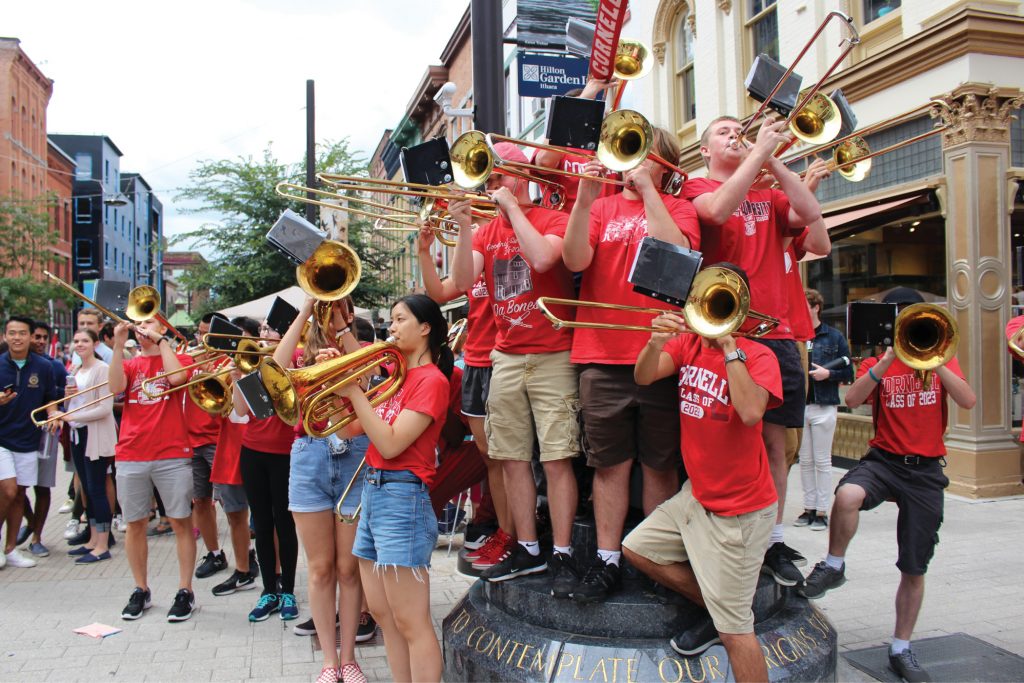 Performing on the Ithaca Commons this year.Provided

Though the band receives some support from the Student Activities Funding Commission, the majority of its expenses are covered by the Big Red Bands Alumni Association, founded in the 1980s to ensure the organization’s financial stability. “Uniforms, instruments, travel—almost all of it is funded through alumni donations,” says association chair Brian Adelman ’09, a sousaphone player who met his wife, trumpeter Shayna Gerson Adelman ’10, in the band. In 2013, alumni spearheaded construction of the Fischell Band Center, a dedicated practice and storage facility that replaced the cramped space in Barton that had been the band’s home for more than a century. Located behind Schoellkopf, the 6,400-square-foot structure features slanted walls and ceilings for superior acoustics. Instruments, equipment, and hundreds of uniforms line the shelves around the center’s main room, a three-story open area used for rehearsals. Up among the rafters, a display of past uniforms showcases the changing fashion trends throughout the Marching Band’s history, from an Army-style green jacket to a simple black coat to an assortment of red-and-white designs. “When I was there, the uniforms were very formal,” Pesner recalls. “Hotel Ezra Cornell used to borrow them for their bellhops.” The current, decade-old model—black pants with a red stripe and a carnelian jacket with a white sash—is slated to be replaced next year. “We always keep the hats the same, though,” says Crosby. “They’re famous. When you see the hat, you know it’s the Big Red Marching Band.”

One thought on “Strike Up the Band”