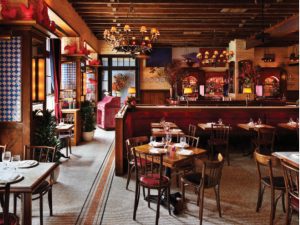 DINING OUT: Zalaznick has co-created such popular eateries as Dirty French.

A hundred meals in as many days. That’s how often prolific New York City restaurant entrepreneur Jeff Zalaznick ’05 eats at each of his establishments when it’s newly opened, with the aim of making sure that the food, service, and ambience are working out according to plan. And once an eatery is up and running, Zalaznick remains a regular. “I eat at my restaurants every night, as if I’m a civilian,” he says. “I never understood why it was considered almost strange for restaurateurs to eat in their own restaurants. That doesn’t make sense to me. How could you know what your guests are experiencing if you’re not constantly experiencing it yourself?” 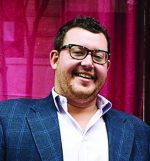 Zalaznick is one of three managing partners of Major Food Group (MFG), which boasts a dozen restaurants and more than 1,700 employees. It’s a Monday in November, and he’s occupying a booth in one of the firm’s more recent creations: Sadelle’s, an upscale SoHo homage to classic New York Jewish “appetizing” places in the vein of Barney Greengrass and Russ & Daughters. It’s closed today, but there’s still plenty of action afoot: on Mondays, Zalaznick and his partners use the space for meetings and staff trainings.

The restaurant—which Harper’s Bazaar put at number one on a January 2016 list of the city’s top “power breakfast” spots—has a glass-walled bakery in the middle of the dining room, where bagels are made fresh throughout the day and transported to customers on wooden dowels. There are brass candelabra everywhere; exposed brick walls, leather banquettes, marble-topped tables, and distinctive baby blue pepper grinders and coffee cups round out the shabby chic, European-inflected décor. “Every one of our concepts starts with the idea that the food has to be great—the best version of whatever you’re eating,” says Zalaznick, noting that Sadelle’s makes its own cream cheese and smoked salmon in house. “We develop all the details around that; everything is specifically chosen for a reason, to tell a story. Here, the story is the reinvigoration of the old-school, classic, iconic New York Jewish restaurant.”

Similarly, MFG’s Carbone—which New York Times critic Pete Wells described as “a fancy red-sauce joint in Greenwich Village as directed by Quentin Tarantino” on the way to awarding it three stars (“excellent”) in June 2013—is aimed at being the ne plus ultra of classic New York fine-dining Italian restaurants: its waiters wear burgundy tuxedoes, and the black-and-white tile floor evokes a key murder locale from The Godfather. (Carbone also has outposts in Hong Kong and Las Vegas.) Dirty French, a Lower East Side bistro whose street sign is in hot pink neon, offers reinterpretations of classic Gallic cuisine; its bohemian décor includes ceramic roosters that Zalaznick spray-painted in matching pink. Other MFG operations include ZZ’s Clam Bar—a reservations-only seafood and cocktail spot in SoHo—and Santina, which serves the cuisine of coastal Italy in a space underneath the High Line in the Meatpacking District (on a site that was once part of the city’s waterfront).

Most MFG eateries are decidedly upscale, with prices so rarified they’re not even listed on the restaurants’ online menus. The firm’s most affordable and best known offering—with five locations, including one at Yankee Stadium—is the popular Parm chain, which serves up carefully crafted versions of classic parmagiana sandwiches including chicken, eggplant, and veal. The rolls are custom-baked to MFG’s specifications, down (roughly) to the number of sesame seeds; the mozzarella is made in house, and the breadcrumbs are a proprietary blend whose ingredients include a particular brand of breadsticks, crushed up. “Every element has been taken back and re-engineered,” says Zalaznick, who shares both business and creative responsibilities with his partners. “We’re not trying to reinvent the wheel in terms of showing you something you’ve never seen before. We’re trying to show you things you recognize, but give you the best version you’ve ever had. At Parm the whole menu is a symbol of that.”

Zalaznick’s partners, Rich Torrisi and Mario Carbone, are classically trained chefs. While food has always been a passion for him—and he was an avid cook throughout college, serving as steward (head of food service) at his fraternity—Zalaznick came to the industry from the business side; he worked at J.P. Morgan after graduation and founded two restaurant-related websites before teaming up with Torrisi and Carbone, who’d previously opened Little Italy’s much-beloved Torrisi Italian Specialties. All three are natives of the New York metro area, and paying homage to the city’s fine dining history is a theme that runs through their business. Last year, they took on one of Manhattan’s most iconic restaurant spaces: the former site of the Four Seasons in the Seagram Building. They’re in the process of rolling out three restaurants in the Midtown location. Two will be housed in what was the Four Seasons’ interior, which is landmarked space (designed by famed architects Ludwig Mies van der Rohe and Philip Johnson) and can’t be meaningfully altered. The former Grill Room will be home to what Zalaznick describes as a classic chophouse, a nod to “the type of restaurant that was prevalent in New York in the mid-Fifties to Sixties”; the former Pool Room will house a modern seafood restaurant. (The concept for the third space, which previously housed a brasserie and is not landmarked, is still being developed.)

Zalaznick stresses that one of the distinctive features of MFG’s restaurants is its style of service. His aim is for the company’s wait staff to be, as he puts it, “a lot less robotic and impersonal” than that of the typical fine dining establishment—which, he admits, has often made him uncomfortable. “We teach service basics, but for us it’s all about finding the right person and putting them in the right place,” he says. “One of the things I’m proud of is that I can’t take a server from Sadelle’s and put them at Dirty French. They’re not Major Food Group-trained automatons. They’re individual people who have personalities that may fit into one concept and not another. We’ve always encouraged our staff to be themselves and try to connect with guests—because they genuinely enjoy what they do and are excited about the food, not because they’ve been told exactly what to say.”

Indeed, in Wells’s review of Carbone, he chronicled an interchange between a waiter and a female dinner guest, an unnamed star of romantic comedies. When the woman’s date left the table, the server cracked her up by complimenting her on his hunkiness. Says Zalaznick: “Your service can be good on paper; you can have the perfect drop on the table and say everything exactly the right way. But rather than have you do those things perfectly, I want the people that you serve to really like you.”