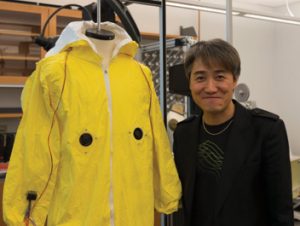 Park’s research, conducted in collaboration with both undergrads and grad students, has run the gamut from fashion to sports to global health. He and a grad student have been developing “smart” high-heeled shoes that can be adjusted in three places—heel, arch, and forefoot—to provide varying levels of comfort and formality throughout the day. He has studied how bulletproof materials can be adapted to create a comfortable, flexible neck shield to protect ice hockey players from potentially deadly blade lacerations.

In 2015, his team received one of twelve grants—out of more than 1,500 applications—from a U.S. Agency for International Development program seeking better ways to fight Ebola. Their protective suit for healthcare workers, which uses a novel closure system of multilayered glue, can be removed quickly, easily, and with minimal contact; when the wearer pulls a string, the garment falls to the ground, lessening the chances of infection. “Our department is a global leader in functional apparel design,” says Park. “We are creating synergy between science, design, and technology to provide very practical benefits for consumers.” ›

Housed in Human Ecology, the Department of Fiber Science and Apparel Design (FSAD) is home to researchers, like Park, dedicated to reimagining what clothing can do. Take Associate Professor Juan Hinestroza, a chemical engineer by training, who is exploring ways to use nanotechnology to endow the world’s most common textile—cotton—with a host of unconventional properties while retaining the material’s cherished comfort. “The entire premise of my lab is how to make cotton do things it normally doesn’t do,” says Hinestroza. “But at the end of the day it will still be 99.999 percent cotton; it will feel comfortable like cotton and drape like cotton, so people will not even know.” 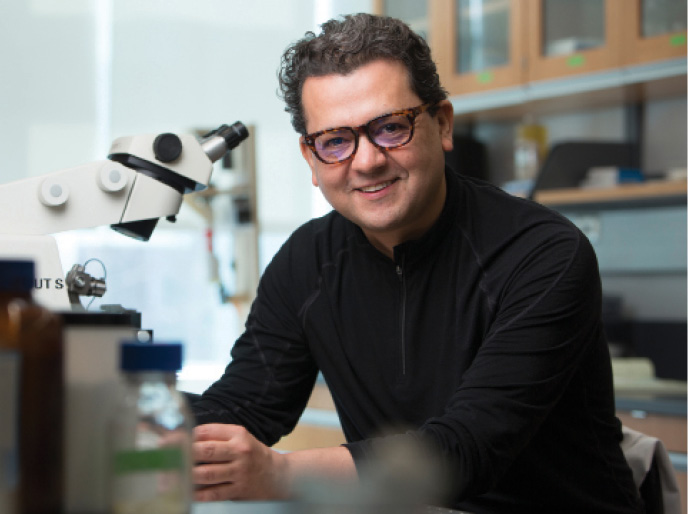 By infusing the cotton with minute levels of copper oxide, Hinestroza’s lab has succeeded in giving the fabric antibacterial properties; similarly, he says, nanoparticles of gold can be used as sensors—allowing, say, for a T-shirt to detect whether its wearer is ill or dehydrated. Cotton impregnated with an insecticide could offer protection against malaria; sheets containing medicine could give a sleeper a low, sustained dose of a needed drug overnight. Uniforms worn by first responders or the military could neutralize toxic gas; camouflage could automatically change color to blend in with a soldier’s environment.

Hinestroza’s lab has successfully made prototypes that do those things and more. His team has even created cotton that transmits electrical impulses, potentially leading to garments that could charge a cell phone or other devices. “My goal is to make Superman’s cape,” Hinestroza says with a laugh. “But Superman’s cape is always red; I want to make it in any color. I want it to stop bullets, stop gas, protect you against everything. But it has to be made of cotton. That’s my condition.”

And speaking of color: Hinestroza not only wants to create cotton that can be made to change hues (reducing waste by allowing people to own fewer garments overall), he also wants to develop fabrics that repel stains and don’t require washing, which he decries as a “primitive” process that hasn’t changed meaningfully in millennia. Additionally, since cotton—like wood—is made of cellulose, Hinestroza’s work has applications beyond fabric and apparel. He says he has drawn interest from companies that produce furniture (which could potentially be made to, say, kill bacteria like E. coli that cause food poisoning) and paper, which could be designed to automatically disintegrate after a certain amount of time—desirable for such applications as temporary security badges. “The idea,” he says, “is to have materials that can facilitate your life.”

Like many of his colleagues, Hinestroza conducts research that spans disciplines; he collaborates with counterparts in CALS, engineering, chemistry, math, and more. Professor Margaret Frey ’85, MS ’89—whose research includes developing nano­fibers that can trap toxic chemicals and pathogens—points out that FSAD’s students and faculty not only work with colleagues across campus, but that the department’s dual focus on fiber science and apparel design is notable among its peer institutions. “Our students are able to work across this entire range—chemistry, physics, materials science, and the design aspects as well,” says Frey, who studied chemical engineering as an undergrad before getting her master’s in fiber science. “How do you take something from the chemistry to a designed product, whether it’s apparel or an object that people are going to use? That’s where this program is unique, in the depth we have—true design skills and true science skills that we’re able to bring together.” 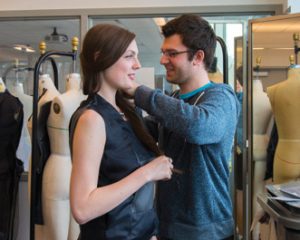 Master’s student Eric Beaudette ’16 joined the department even before he officially matriculated as an undergrad. After meeting Professor Susan Ashdown, MS ’89, during a high school visit to campus, he did a pre-freshman summer research project in her lab, studying the performance of activewear using body scanning technology. “I applied to various universities for chemistry and math, as well as to a number of art schools for apparel design,” he says, “and Cornell was the only place where I could pursue both disciplines.”

Beaudette worked in Park’s lab throughout undergrad, contributing to a variety of studies on functional apparel design. He was part of a multidisciplinary team that won a $10,000 Innovation Award from the School of Electrical and Computer Engineering for developing a “de-stress vest” that simulates the sensation of receiving a massage; the garment uses 3-D printed bristles and electric actuators controlled by a phone app. Beaudette says the technology, which has been patented but is not currently in active development, could potentially be used not only by stressed-out students, but to calm patients before surgery or soothe airplane passengers who fear flying.

Beaudette has also worked on a major ongoing project—whose collaborators include Park and which is being led by FSAD department chairman Jintu Fan—that garnered a $3 million grant from the U.S. Department of Energy in 2015. Its aim: to develop specialized undergarments that contain microscale tubes that can direct warm or cold air so the wearer can maintain an optimally comfortable temperature. Essentially, it would be a form of personalized air conditioning that could lead to significant energy savings. “The DOE estimates that if you have this technology, you could expand the limits of temperature set points for the indoor environment by four degrees on both sides,” says Fan, who’s also director of the Cornell Institute of Fashion and Fiber Innovation, which fosters collaboration between academia and industry. “That could reduce about 15 percent of the energy required for heating and cooling, which consumes about 40 percent of total energy in the U.S. So that’s very significant.”

The garments that the team develops will be tested on a “sweating mannequin” that Fan invented before coming to Cornell. Dubbed Walter, it resides—along with its female counterpart, Wenda—in a temperature- and humidity-controlled fiber-analysis lab in the Human Ecology Building. The mannequins have “skin” composed of a breathable fabric, with water running through small pore-like openings to simulate perspiration. In one of Beaudette’s many undergrad research efforts, he used Walter for a project (on the relationship between seam type and thermal comfort in activewear) that went on to win first place in an International Textile and Apparel Association paper competition and was published in Textile Research Journal.

Beaudette’s other honors have included a $30,000 Geoffrey Beene National Scholarship, which he won for his theoretical case study of a subscription-based company he conceived. Called “Recycl3D,” it would ship custom-fit, 3D-printed apparel items that could be sent back for recycling when they’re no longer wanted. “You could change your garment for different environments, such as going from work to the gym, by switching out different pieces—like collared shirts that convert to sleeveless tops,” explains Beaudette, who hopes to launch his own apparel and consulting firm someday. “I wanted to see how I could use the technology of 3D printing textiles to create something that’s not happening in the fashion industry right now.”