You can’t say you weren’t warned.

As you walk through a fictionalized “museum of antiquities,” you learn that an ancient Egyptian curse has struck the cast and crew of a sequel to the 1999 comedy-horror film The Mummy. If you’re brave enough to keep going—and climb aboard a train that whisks you into a haunted tomb—you’ll soon encounter a partly mummified victim who screams, “Get out of here! The curse is real! This whole place is a trap!” Then you get sling-shotted from zero to 40 miles per hour, threatened by a soul-sucking mummy, attacked by video-projected scarabs, dropped down a 50-degree incline, and surrounded by (actual) fire.

Welcome to Revenge of the Mummy, a themed roller coaster at Universal Studios in Orlando, Florida. The ride, which has sister versions at Universal parks in Hollywood and Singapore, is a multi-year winner of the Golden Ticket Award—the Oscars of the theme park world—in the category of best indoor coaster. Terrifying vacationers since 2004, it’s the brainchild of Premier Rides, the Baltimore-based coaster company founded by Jim Seay ’84, which designed it in collaboration with Universal and the director of the Mummy films. “It allows people to immerse themselves and really feel the intensity of the movie while they’re on a ride,” Seay says, noting that the coaster, which runs on a magnetic propulsion system, has hosted some 150 million people at its three locations. “It has a cutting-edge ride system, animatronics, and fire effects, and it combines those elements with a great intellectual property in a seamless way.” 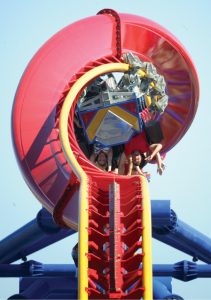 The Mummy coaster is one of dozens of rides that Premier has created since Seay founded it in 1995. The company has clients around the world—from Indonesia (home to its Yamaha Racing Coaster, which accelerates to more than 60 mph in two seconds) to India (which has a dark indoor coaster, Deep Space, at a park in the state of Maharashtra) to Qatar, where Dragonfire, a sixty-meter-high indoor-outdoor coaster will be the centerpiece of a new theme park set to open this year. Working with automaker BMW, Premier designed three coasters (two in the U.S., one in Canada) that evoke a chase sequence featuring MINI Coopers in the 2003 heist picture The Italian Job—complete with pyrotechnics, water effects, and simulated gunfire. “We focus on building the most complex, top-of-the-line attractions—ones that our clients are investing significant funds into, in the hope that they’ll increase attendance and generate extra revenue,” Seay says. “My goal is that when someone goes on one of our attractions, it’s a lifetime memory. With everything that goes on in the world today, it’s great to be able to take someone out of their day-to-day environment, and for a few minutes put them into something that’s totally different and totally thrilling. The best thing that can happen to me is that I mention an attraction to someone years later, and their eyes light up and they say, ‘Oh my goodness—that scared the hell out of me.’ ”

One of Premier’s signature concepts is its “multi-launch” coasters, which catapult from a stop to high speeds (sometimes backward) several times during a single ride. They include Tempesto at Busch Gardens in Williamsburg, Virginia; Full Throttle at Six Flags Magic Mountain outside L.A.; and Phobia Phear at Connecticut’s Lake Compounce Family Theme Park. (The latest, Electric Eel, opened in May at SeaWorld San Diego.) Last spring, the Chinese entertainment and real estate conglomerate Wanda released some tantalizing photos offering a peek at a “multidimensional cinema robotic roller coaster” it’s developing with Premier for a theme park in Guangzhou, set to open in 2019. “We’ve been working with them on it in secret,” Seay explains. “You’re going to be on a roller coaster, but we’re putting high-tech robotics on it, and you’re riding on the robots. Imagine being on the end of a robot arm—and that arm is on a roller coaster. It’s a pretty intense engineering exercise.”

Experience the thrill of holding Cornell in your hands six times a year!

A mechanical engineering major on the Hill, Seay came to the coaster business via the aerospace industry: he interned at California’s Hughes Aircraft as a student and got a job there after graduation, working on high-tech applications like using laser beams for covert communications. With government funding beginning to ebb with the end of the Cold War, Seay transitioned to the state’s other major industry—entertainment—working in engineering for the Six Flags theme park chain. “Companies were starting to develop big attractions,” he says, “and essentially they were using the same skill sets as in the aerospace field.” His projects included the Viper, which was the world’s tallest and fastest looping coaster when it opened at Magic Mountain in 1990. “I learned a lot, because these rides have a tremendous amount of engineering and testing and an impressive maintenance program,” he says. “You’re taking the same conservative approach that you would when you develop aircraft. You use the same tools for the computer analysis; you completely model the ride, to the point that you know what the experience will be before you build the equipment.”

And when it comes to safety, he says, as in aviation, redundancy is key. “You often hear about an airplane that loses an engine, but it can still land safely,” he says. “That same concept is used in our industry, where you look at safety from every aspect of a ride’s life.” For example, a lap-bar restraint system has backup locking mechanisms that riders never see. “We go through this heavy effort where you’re looking at all the potential failures and mitigating them,” he says. “From the outside it looks like this is just a fun job—and it is. But you have such an intense focus on safety that it’s also very methodical, detailed, and analytical. Safety is the number-one thing that goes through every step of the process.”

Once a newly installed ride has been thoroughly tested—both through computer analysis and using dummies akin to those in the automotive industry—Seay aims to be one of the first humans to climb aboard. Surprisingly, though, he wasn’t much of a coaster fan as a kid. His first: an old-style wooden coaster at an amusement park outside New York City that he rode at the age of eight or nine, “and I think I was pretty damn scared.” Seay was born in Switzerland, to a mother whom he describes as “a Liverpool showgirl who hung out with the Beatles” in her youth; his father was a Texan who wasn’t involved in his life, but gave him access to American citizenship. His mom, who became a journalist and photographer, opted to raise him in the U.S., and they settled in Connecticut; she eventually married a Hungarian-born artist, and Seay spent many of his weekends at a Manhattan arts colony. 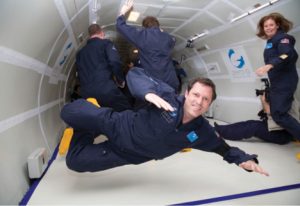 Seay aboard a zero-gravity flight he took for fun in 2007.Provided

These days, Seay spends about half of his work life on the road. For fun and stress relief, he pilots a four-passenger Piper Archer airplane, which can take him up and down the East Coast and as far west as the Mississippi. “To fly, you have to have absolute focus,” he observes. “It takes your mind off of every other issue you’re dealing with, which is healthy.” One of his biggest personal thrills: participating in a zero gravity flight with Stephen Hawking in 2007, which included spending several days with the famed physicist. “He was quite the guy. It was amazing to be with him in person,” Seay recalls of Hawking, who passed away this spring. “He knew what industry I was in, and he told me that he loved roller coasters. He very much wanted to ride them; he was disappointed he wasn’t able to, and he wanted to find a way that he could.”