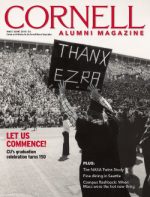 In response to our May/June 2018 feature on Commencement, many readers shared their graduation memories:

I have received CAM for thirty-eight years and was shocked to see myself on the cover! That’s me holding the “Thanx Ezra” sign at my graduation in 1980. Oddly enough, my daughter Carly graduated this year. How proud I was! I hope it will now be our campus, our Cornell. What a coincidence that this Photo was used this year! 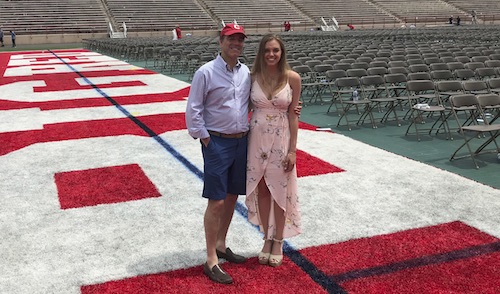 TWO GENERATIONS: Mark Steckel ’80 and daughter Carly Steckel ’18 were the last to leave the stadium after this year’s Convocation ceremony.Provided

In 1976, we were privileged to hear Walt LaFeber speak at Commencement. My recollection was that his words were inspiring and thought-provoking. In 1991, I wrote to Walt and asked for a copy of his speech; shortly thereafter, a big envelope from McGraw Hall arrived. Enclosed was a lovely letter and a copy of his truly magnificent speech about the founding of the country and Cornell and our place in the world. I share his speech periodically with friends, both Cornellians and non-Cornellians.

I remember Professor LaFeber’s speech. It was momentous that our graduation year coincided with the Bicentennial. Weather was beautiful, sunny, and hot!

I recall the Bicentennial fever, Professor LaFeber’s powerful message, and the heat way up high in the stadium!

President Rhodes reciting the Gaelic blessing, “May the road rise up to meet you…” as only he can. One of my most special memories.

A friend and I carried balloons in the procession into Barton Hall. Our parents, somewhat abashedly, were able to pick us out from the throng.

We were the last class to use Barton Hall. It was real “cozy.”

I don’t remember who spoke at my graduation; I was so tired from hanging out with my friends one last time that I passed out for most of it. My wife had President Clinton speak at hers. Not fair.

WEATHER OR NOT: In a tweet to CAM, Kevin Williams ’81 reminded us that meteorology students have their own Commencement tradition of marching with umbrellas.Cornell Chronicle

I was there before the Macs arrived (“Cornelliana,” May/June 2018) and when they replaced the IBM Displaywriters. My work/ study job was to help students use the machines. The IBMs looked like full-fledged PCs but were only word processors. I have a not-so-fond memory of a student losing her whole 100-page document.

Yes, people lost docs on those huge floppies, but sometimes we could save them. There were ways to get behind the menu-driven interface. Wrote my honors thesis in that Goldwin Smith room on Wednesday nights.

I brought an Adler manual typewriter to Cornell in fall 1983. It was a great, if clunky, workhorse that required gallons of Wite-Out to turn in anything respectable. I remember writing my first “Mac paper”— about fifteen pages—where I discovered the miracle of integrated footnotes. It took two floppy disks to store my masterpiece.

We recently had a get-together of six Class of ’86 friends where we read our old letters to each other out loud. They started as handwritten. Around 1985 we exclaimed in the letters that we were typing on a word processor and it was so amazing.

I was at Cornell when we needed permission and punch cards to use the mammoth computer in Rand Hall. By the time my daughter [Anna Baum-Stein ’00] was a freshman the era of the personal computer was at hand.

I worked for CIT starting second semester sophomore year. I could write a book of the stories from those days, such as when Cornell was ground zero for early Internet worms and viruses, battling with students intent on hacking the VendaCards used to pay for laser printing, and moving Macs around in the basement of Carpenter Hall so the pipes wouldn’t leak onto them.

Waiting in line to print was so frustrating. It’s the reason I opted out of computer science as a major.

The shock of losing work on a Cornell computer taught me to constantly “Ctrl+S.”