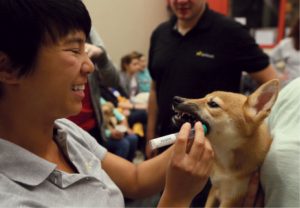 Patriots quarterback Tom Brady may have made football history on Super Bowl Sunday—but did he score a touchdown with a squeaky toy shaped like an ear of corn?

That distinction, in fact, went to another New Englander: Daisy, a mixed-breed puppy from a Massachusetts shelter. The thirteen-week-old scored three times for Team Ruff in the first half of the Puppy Bowl, Animal Planet’s canine counter-programming. “Daisy is one fierce pup,” the announcer noted after the mutt split two defenders from Team Fluff and ran to the end zone. “She’s a mixture of speed and tenacity: part border collie, part Lab, part beagle, and a little bit of Boston terrier.” 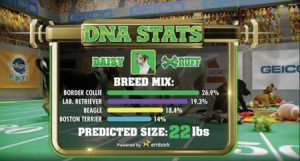 Daisy’s ancestry wasn’t a matter of conjecture. With the other seventy-seven furry athletes tapped for Puppy Bowl XXIII, she’d had her DNA analyzed by a canine genetics company affiliated with Cornell—and the multiple shout-outs the firm got on game day spurred a spike in website traffic and a spate of new orders.

Dubbed Embark, the biotech start-up was co-founded by Adam Boyko, an assistant professor of biomedical sciences in the Vet college. The company, an official University research partner with offices in Weill Hall, licenses Cornell-patented technology, developed in Boyko’s lab, to analyze dog DNA. That testing, which takes between four and six weeks and is akin to the human services available from companies like 23andMe, not only parses breed ancestry, but assesses the risk of more than 160 genetically related diseases and conditions. “This is a way to accelerate research—to collect thousands of samples that researchers would otherwise not have access to, and get them genotyped,” says Boyko. “And on the flip side, it gives owners the most cutting-edge knowledge that science has about their dog from its DNA.”

Boyko—who did a postdoc on the Hill after earning his PhD in biology from Purdue—co-founded Embark with his brother, who holds grad degrees in public health and ecology. Their company is headquartered in Austin, Texas, where the testing kits are processed (though the data analysis is done in Ithaca). Since launching on Memorial Day 2016, Boyko says, Embark has sold several thousand kits, many of them to breeders who want to avoid passing on genetic diseases. Other clients are private owners who are curious about their mutt’s ancestry, or who want guidance in maintaining their dog’s health. “Next to humans, there are more known genetic disorders in dogs than any other species,” he says. “If you know your dog is at risk, you can modify behaviors or know what to look out for—so you can reduce the likelihood of a problem or be able to diagnose it more quickly.”

Embark both taps into and supports Cornell’s biobank of canine DNA, which is more than 20,000 samples strong. Clients at the Cornell Hospital for Animals can get a discount on Embark testing (which retails at $199) if they have their dog’s DNA included in the biobank. And customers who purchase Embark’s mail-in testing kits can have their pet’s DNA entered into the company’s database for research purposes—and Boyko says 95 percent do so. According to Chip Aquadro, director of the Cornell Center for Comparative and Population Genomics, such involvement by the lay public can have unexpected benefits. “These direct-to-consumer services are really valuable, because they get people interested in the science,” says Aquadro, who had an Embark analysis done on his family’s golden retriever. “Genetic testing is playing a growing role in medicine for humans, and the more people understand the basic principles—whether it’s through learning about their dog or about themselves—the more they’ll understand the direction medicine is going.”